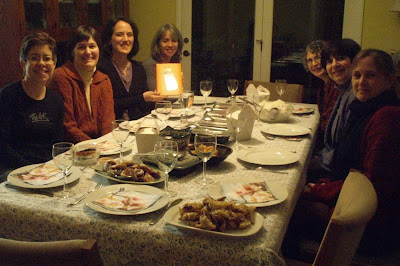 Last night was our book club discussion of The Fortune Cookie Chronicles. I served the Chinese food we all were craving: dumplings from the Chinese grocery store and take-out food including General Tso's chicken, Buddha's Delight, tofu with vegetables, garlic green beans, an unnamed Chinese vegetable (I think it was some sort of bok choy), and sesame beef. My friend Tsun had given me a tip for pan-frying the dumplings to make pot stickers. He said to add some balsamic vinegar along with the water to steam the pot stickers, thus making a kind of glaze. Delicious!

Finally, we had chop suey made by Gabi from her husband's grandmother's recipe. A whiff of it for me was a Proustian experience: it smelled like the chop suey my mother made from the Chun King Chop Suey kit. She brought a big bag of crunchy noodles to put on top of it, too. The recipe calls for both pork and ground beef.

When we discussed our experiences with Chinese food, about half of us remembered our mothers' use of the kit from La Choy or Chun King: canned sauce, canned vegetables, and soy sauce from a tiny bottle combined with chopped fresh celery and beef or pork. Mary Beth's mother was ahead of the rest: she took a Chinese cooking class and ever after made fried rice (MB didn't like it much, we gathered). Laura said that on Chinese food night she would call her friends and ask if she could eat at their house. Barb said the kit-made chop suey was part of the weekly rotation. 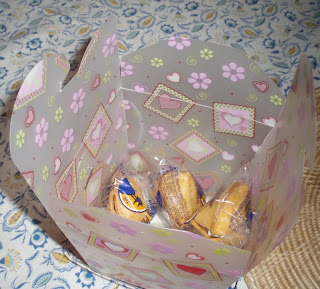 Our discussion also ranged over the Chinese restaurants of our collective first experiences in Evansville IN; St. Louis MO, Dearborn, Grand Rapids and Flint MI, San Francisco China Town, New York City, and Windsor, Canada across the bridge from Detroit. Earlier memories include the old-style Cantonese specials like almond chicken and egg foo young, as well as chop suey. We talked about the rather gummy dinner rolls that we recall came with the menus in some of these restaurants, such as Kow Loon in Dearborn and Leo Ping's in Ann Arbor. All of us have long-since moved on with Szechwan etc. as newer and better types of Chinese food caught up with us. Most of us also have Chinese friends, colleagues, or in-laws who have introduced us to Chinese American home cooking. 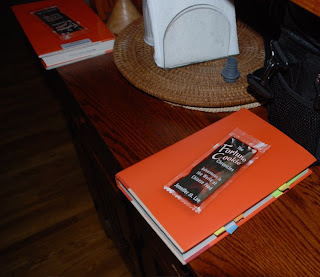 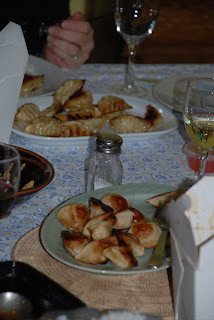 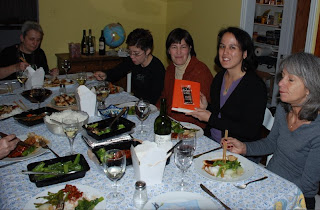 How wonderful to read about your great evening and see pictures of you all. Can't tell you how much I miss you!