Catherine Mambretti, a mystery author and blogger about legal issues (http://blog.thejurorinvestigates.com), responded to my Chinese food posts with a fabulous account of her recent trip to China. Here it is:

I just returned from my first visit to Beijing. Everything about the place was a huge surprise--not the least of which was the food. I haven't seen "The Fortune Cookie Chronicles," but I'd be curious to learn what it says about some menu items offered at "The Princess Restaurant" (in the Best Western Hotel), including deep-fried bullfrog, whole abalone, and "sea bream" (which was a mistranslation of sea slug). There's no mistaking these dishes, since the menu provided four-color photos. 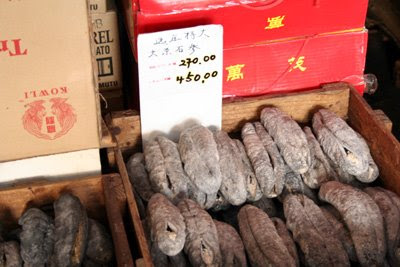 The "sea bream" looked like a black and orange version of this creature: http://i10.photobucket.com/albums/a135/tanjay_1/Malaysia/IMG_1218.jpg [and at right].

Another favorite delicacy (according to my English-speaking guide) is fried scorpion, which can be found at a popular street market in the central city near the five-star hotels. Fan Wu's 2006 novel, February Flowers, also describes a snack of parboiled scorpion. (Being a mystery writer, you can probably guess how this set my imagination off.)

For breakfast, besides congee soup, a ubiquitous offering was tea-boiled egg. I have a cholesterol problem, so I didn't try it. A couple of years ago in Taiwan I tried "thousand-year-old duck egg" and immediately had a gallbladder attack.

The obvious conclusion is that the Chinese believe, "Waste not, want not." Even the preparation of chicken proves this. The Chinese hold chicken feet to be a delicacy. Chicken stews use the entire chicken chopped into bite sized pieces (skin, bones, neck, and flesh); nothing is left out except the feathers. The Chinese may not bake, but they do use ovens for preparing these stews in clay pots with whole garlic cloves, roughly chopped onions, and a luscious brown sauce. I was taken to an ethnic Dai restaurant that served this chicken stew in the bamboo tube in which it was baked. The bamboo was said to lend the stew a unique taste (although my jaded American tongue couldn't detect the bamboo).

Even in the hotels that cater to Westerners, items on the menu bear little resemblance to Chinese foods I've eaten elsewhere. Hot-and-sour soup is generally less sour and more hot; a delicious variation had crab in place of beef strips. Crab baked in the shell was coated in coconut. Most dishes were lightly spiced, allowing the flavor of the main ingredient to dominate: if you order asparagus with almonds, that's what you get. The sauce, of course, doesn't rely on corn starch for body. (A Taiwanese woman told me long ago that Chinese food doesn't use corn starch.)

In Taiwan, MSG is ladled into food. I can't say whether this is true in Beijing. In fact, in Taiwan a popular wedding gift is jars of MSG.

"The Fortune Cookie Chronicles" may claim that Chinese meals don't end with sweets, but they do end with fruits. When my husband visited Shanghai several years ago, one of the multi-course meals ended with elaborately carved melons. Like the Japanese, the Chinese take fruit very seriously. Unless a fruit is perfect in every way, it isn't sold, let alone served. I visited a tiny village just north of Beijing (although technically inside Beijing's boundary, the "fourth circle") called Longevity Village, where the Ming emperors are buried. The fruit there is particularly prized. At the time I was there, the apple crop was almost ready to harvest. The golden fruit on the branches brought to mind William Butler Yeats' "the golden apples of the sun. . . ."

Drinks are also unlike anything served anywhere else I've been. I had celery juice, lichee soda, and an array of teas (about which I could write at very great length).