"A History of Cooks and Cooking" 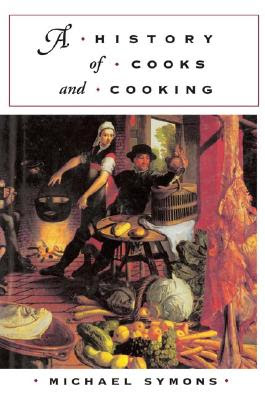 For a book about food A History of Cooks and Cooking has a lot of undigested material! You can learn about the sin of gluttony, the salt trade in Jericho 12,000 years ago, The Seven Necessities that the Chinese feel even poor people need (firewood, rice, oil, salt, soy sauce, vinegar, and tea), the history of chefs' knives, the origin of specialized butchers at least 9000 years ago in the Middle East, the role of animal sacrifice in the history of cooking, feasts, festivals, and other dining rituals, the loaf of bread given to the prophet Jeremiah, and many other trivial or important facts. Each chapter has a topic, but in the end, the enormous amount of detail makes it hard to get a big picture.

The encyclopedic nature of the book is reinforced by little black-and-white sketches and full-page images of various food themes, bits of cooking equipment, and elaborate dishes. These images are uncredited and unlabeled (as far as I can find in the book).

My favorite chapter is titled "The Sons of Mama Camous." Its subject is restaurants, cook shops, street food, and other public cooking. The author begins in ancient Sumer around 5000 years ago, and includes details from ancient Egypt, ancient Greece, Biblical times, medieval China, early modern Europe, and many other places and times.

Finally we get to the chapter's eponymous Mama Camous, the foster-mother and mentor of Henri Charpentier, a famous restauranteur in Paris and New York around 100 years ago. Mama Caomous' example -- along with that of her son, also a famous chef -- set Charpentier on the way to his invention of Crepes Suzette and his fame as a very refined master of French haute cuisine. His autobiography, the author tells us, elaborates her peasant ways with fresh food, and describes how he ended up feeding such famous people as Sarah Bernhardt, Theodore Roosevelt, Baron Rothschild, "Diamond" Jim Brady, and high-living diners on Long Island in the 1920s. (p. 319-320)

Symons' History is overwhelming at times, and frankly difficult to read, but it's chock full of information about every aspect of cooks' history. His premise is unforgettable: other animals may walk on 2 legs, may use tools, may speak a few words, may even laugh -- but only humans cook their food. (p. xii)
Posted by Mae Travels at 10:26 PM

Sounds like a book to be consumed in small bites....!