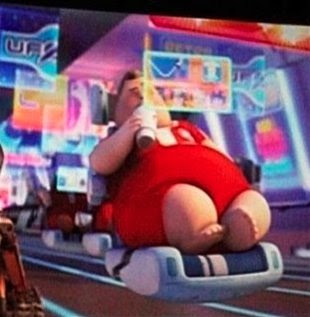 To follow up my reading of the book Liberation by Brian Francis Slattery, I watched Wall•E -- just out on DVD. The end-of-the-world-as-we-know-it is a little different here. Masses of detail and flashbacks to our world abound, of course, but all visual. Not to mention reminders of other ends-of-the-world, like 2001: A Space Odyssey, commemorated by musical references: the Blue Danube; Also Sprach Zarathustra, what else could you want?

A much more important fate: living on shakes. The descendants of the no-doubt brave astronauts of the 21st century really enjoy their food, unlike the poor victims of financial meltdown in Liberation.

But to continue what I was saying about Liberation, of course there is a plot concerning "the slick six," formerly a clever and effective criminal gang, and its most colorful character Marco. In the novel's present, after the financial meltdown, they challenge and defeat the overlord who runs New York and the slave trade. Well and good. 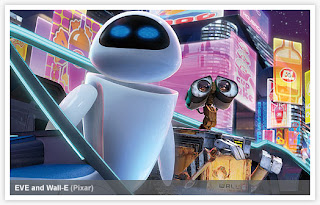 But Marco's road trip constantly seems to be interrupted, rather than enhanced, by the wealth of images and emerging political alternatives of the imagined future. Instead of providing just the necessary context for his adventures, the author provides us every detail that he imagined in working out how a financial catastrophe (maybe such as the one we're in now) would change the country. The examples I gave, of food visions without actual eating, suggest this discrepancy.

In short, I felt as if I was reading two books at once. One a serious vision of the meltdown. The other a normal sci-fi adventure set in a disfunctional future. Wall•E is just a reminder that a good story can use the details of a vision without being swamped.

Oh -- did I mention that Wall•E is funny? And Liberation is Deadly Serious?
Posted by Mae Travels at 1:10 PM

I actually found Wall-e sad. Yes, there were funny parts and charming parts, but the scenario was all too easy to imagine. Now I have to go back and read more about what you've been reading. I scored some great books about cooking at the Library sale today. Heat and No Reservations - both of which I've wanted to read. Usually I'd just get them out of the library, but at a buck a piece, I couldn't resist.

I think I found Wall•E more amusing because of the contrast with the dour and down and just-read "Liberation." Those humans with their shakes were enjoying life on the Lido deck. And Wall•E was bringing them back to save the earth. In "Liberation" nobody was going to save anything.

I think I'll stay away from "Liberation" then. ;-)