Adventures of the Slick Six

A review of Liberation: being the Adventures of the Slick Six after the Collapse of the United States of America by Brian Francis Slattery. 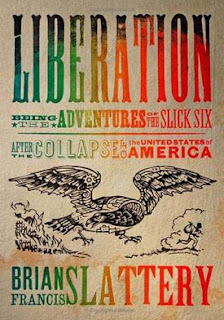 What if a financial collapse took out the dollar entirely. What if all commerce, industry, transportation, and communication in the US went out with the dollar? The result would surely resemble the disrupted society of Slattery's Liberation. However, I think a novelist actually writing post-collapse would create a very different book from this one.

Suppose that a writer in person confronted mass starvation, joblessness, and breakdown of all effective laws, disappearance of gasoline, electricity, TV signals, and water. Suppose that the writer realized that either all political authority was consolidated in criminals or all social control disappeared into anarchy. Suppose this writer had experienced desperate people selling themselves into a newly instituted slavery. Suppose his friends had suffered even worse fates than he. Could he then do so much fine writing, heaping on details of many sorts, but rarely evoking the gut reaction of a real human being? I would expect a more dramatic rendition of this experience.

Well, that's speculation, but as I read this book, I wished for more action, a tighter plot, and less discursive writing. I wished that the writer had indeed imagined all these details, but had transformed his hypothetical experience into a more coherent type of fiction. While a road trip is a good way to show the reader how one imagines a variety of results of the hypothetical economic meltdown, I wished it had resulted in more human interaction and feelings.

As is my habit, I was particularly interested in how Slattery used food within the long and detailed passages about the old and new economies of his distopia. What struck me most, was that the characters in the book never seemed to be described in the actual act of eating. Starvation constantly threatened individuals who didn't have the skills to trade, barter, steal, trick, or brutalize their way through the terrible economy. But no one ever just ate a meal.

Flashbacks where food figures occur to characters in moments of torment or reverie. Even in pleasant memories, food seems more like a commodity than an experience:

"It's a bad joke, a bad dream... he is back in his past, in the arms of his ex at the state fair, among funnel cake and painted signs, the screams of children, the blinking lights of amusement park rides. He is in his mother's kitchen in Phoenix, a steaming tamale in his hand; he peels back the husk to reveal the warm flesh beneath, cornmeal and jalapeno peppers, the tang of chorizo." (p. 223)

"Now and again there's a twinge... A sausage cooked over a fire under a full moon, crashing waves. But it happens less and less all the time." (p. 267)

"Ralph Morrison was running a supermarket near Black Mountain when the dollar fell... Vegetables from Mexico, twice as much as they were the day before. Those fancy peppers from Holland, unattainable. He bought what he could, put it on the shelf with new stickers. ... People started coming in with pocketbooks full of bills, then shopping bags. Came out with seven cans of green beans, a carton of milk." (p. 91)

"She supposes it's better now; but sometimes she misses those colors... She misses candy bars, Twinkies, and Mallomars." (p. 274)

In the new, economically melted-down times, food varies from a pleasant diversion to a horrible nightmare. Here are some examples, with a bit of the context, though the descriptive passages where these crumbs of food writing appear are quite long and full of other things as well:

"The Angeleno sky fills with angry buzzing as they rise from mansion backyards and alight on the roofs of offices or the parking lots of restaurants that have turned salt cod and beef jerk into delicacies." (p. 145)

"The burger and beer place is now a chicken joint called Rusty's Avian Clearinghouse, serving every part of the bird -- if you'll eat it, we'll fry it, they say -- along with shots of grain alcohol that you can cut with the sugar-water squatting in a plastic milk jug on the counter." (p. 122)

"The slave markets are social events, with electricity, strings of Christmas lights... carts with yellow umbrellas selling curried mutton and green beans, tamales with chiles; horses clapping their hooves against the ground, sweating in the heat while clowns on stilts with pump accordions let a flock of balloons escape into the sky." (p. 56)

"The shirt was stained with grease and sweat, flecks of blood from three weeks before when he and Kari had cornered a dog, slaughtered it, and eaten it after roasting it on a spit over a burning, hacked-up door." (p. 134)

"Their cat complained about the lack of canned salmon; the couple looked at each other and wondered when they might have to eat him." (p. 120)

These excerpts on one theme are a clue, I think, to the way this novel is constructed from masses of detail trying to help imagine a catastrophe that would be too big for any one person to grasp. It's notable that the book was in print just before the current economic downturn made it especially painful to imagine such a collapse.
Posted by Mae Travels at 12:18 PM