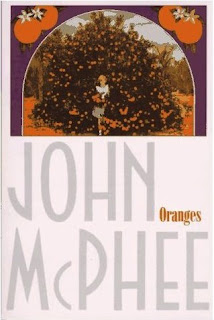 Today I read Oranges by John McPhee. Published in 1967, and still in print, the book is a little like a time capsule. The main focus of the book is on the Florida orange industry of 40 to 50 years ago.

In the 1960s, the Florida orange-growing industry was in transition from producing and shipping fresh fruit up the east coast. The invention of frozen orange juice had just made a huge change. Instead of selecting and packing fruit, growers now sent them to nearby factories, in which the more imaginative businessmen among them were investing their money.

Instead of juice or fruit whose flavor varied from season to season, from tree to tree, and even from one orange section to another, the factories blended multiple types of concentrated, processed, frozen juice (which tastes, he says, like a blend of sugar and aspirin) with a little of the real thing.

At this point in the sixties, consumers had gladly switched over from squeezing oranges to reconstituting the stuff in the little frozen cans. McPhee discussed the sociology of this: the blue-collar families of his day were still drinking canned juice, while the educated consumer had embraced the frozen, and hardly anyone still squeezed their own. And the juice box, like the pasteurized OJ that's now most popular, was as yet unthought of.

As McPhee traveled the byways of rural Florida (remember, before Disney), he found that even the orange juice stands that remained out of a sense of tradition were serving reconstituted juice. Further, his interviews with growers, pickers, and factory owners revealed that many orange groves were being cleared for new land use -- the NASA facility at Cape Canavaral was in the process of being built on former groves. Above all, he wrote about the frenzy of effort to create new chemical orange juice surrogates. Add water to some crystals they were inventing -- they thought you would get orange juice. (I think they got Tang, but it was in the future and they were still optimistic.) 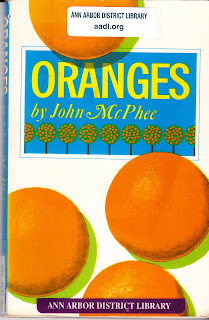 The material on the Florida industry is augmented by McPhee's brief -- though well-written -- overview of the history and social uses of oranges. He describes their origins in China, mentions the orange as an art motif especially in the Renaissance, presents the love of French kings and their peers for Orangeries, and says a few general words about orange juice drinking habits among various cultures of the world. Good job!

The top image here shows the current edition, which I have not seen. The second image is of my library book, a first edition from 1967. The graphic choices of the two covers support my time-capsule viewpoint.
Posted by Mae Travels at 12:09 PM

My husband adores just about anything written by John McPhee. He was truly a remarkable writer.