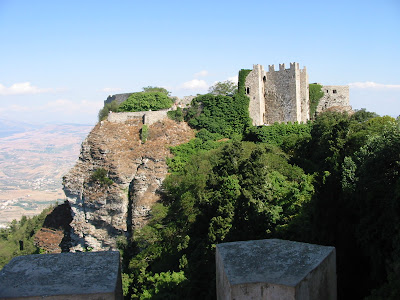 In his blog this month, famous food author Harold McGee had an interesting post on post modern cooking: News For Curious Cooks: Modern cooking and "molecular gastronomy". McGee has been creating a history of gastronomic seminars at the Erice conference center that brought together leaders in this field uniting science and cooking -- his forte. I learned that McGee was an organizer of these seminars, along with a physicist, Nicholas Kurti. Of course I was especially fascinated by this, as I've been a trailing spouse at 4 or 5 seminars at Erice. Being there is a fabulous experience -- including the food served at the many restaurants in the tiny hilltop town where an ancient monastic complex has become a physics and science conference center. The photo at right is from our most recent trip there a few years ago.

One point in McGee's articles was the distinction between the science of cooking, including various experiments in synthetic creation of food-like offerings, and the presentations of certain modern cooks. Their avant-garde cooking often goes by the name of molecular gastronomy, though there are many writers who feel this is a mistake. The term was introduced in the title of the first Erice seminar, not intended as the name of a type of cuisine, but as a discipline, if I understand correctly. McGee makes this point:

Misinformation and misunderstandings about experimental cooking have been accumulating from its very beginnings. They're now hardening into bad pop cultural history that tags very different chefs and their ideas with the impressive but empty terms "molecular gastronomy" and "molecular cuisine."

The two documents and many supporting letters and conference poster are a fascinating bit of history, which McGee is in a special position to preserve.

I was very interested in one link, to the website of the most famous of the cooks in this probably mis-named cuisine: Synthesis of elBulli cuisine, which is a manifesto (without specifically admitting it). I felt this set of principles resembled another such document: Marinetti's The Futurist Cookbook. I claim this in support of my recent observation (Futurists see the future) that Marinetti's food preparations and presentations -- which were meant only as an exercise in imagination -- closely resemble food of the so-called molecular gastronomists. It's bizarre how the pretensions of this modern cuisine resemble the rants of this 1932 document of strange surrealist intent.

I agree. This movement is kind of beyond what I can feel comfortable with, although I liked some of the photos I've seen of movement foods. They're interesting artistically, but it reminds me of playing with food in a wasteful way, if that makes any sense?