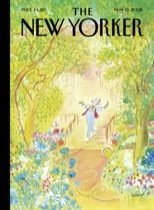 All the while that I'm blogging my essentially frivolous thoughts on food, I am also in parallel thinking about the looming food insecurity of the third world. Every day new events and problems are the subject of various articles, to which I make no comment. I don't have any enlightening ideas or facts.

I would like to mention a particularly interesting article on this subject in the New Yorker: "The Last Bite: Is the world’s food system collapsing?" by Bee Wilson. In this article, Wilson discusses several books: The End of Food by Paul Roberts; Stuffed and Starved: The Hidden Battle for the World Food System by Raj Patel, Bottomfeeder: How to Eat Ethically in a World of Vanishing Seafood by Taras Grescoe, and In Defense of Food: An Eater’s Manifesto by Michael Pollan.

A few quotes from Wilson's article:

"The world seemed to have been liberated from a Malthusian 'long night of hunger and drudgery.' Now the 'dark tints' have returned. The World Bank recently announced that thirty-three countries are confronting food crises, as the prices of various staples have soared. From January to April of this year, the cost of rice on the international market went up a hundred and forty-one per cent. Pakistan has reintroduced ration cards. In Egypt, the Army has started baking bread for the general population. The Haitian Prime Minister was ousted after hunger riots. The current crisis could push another hundred million people deeper into poverty."

"All of these authors agree that the entire system of Western food production is in need of radical change, right down to the spinach. Roberts opens with a description of E.-coli-infected spinach from California.... Industrial farming means that even those on a vegan diet may reap the nastier effects of intensive meat production. It is no longer enough for individuals to switch to 'healthier' choices in the supermarket. Schlosser asked his readers to consider the chain of consequences they set in motion every time they sit down to eat in a fast-food outlet. Roberts wants us to consider the 'chain of transactions and reactions' represented by each of our food purchases—'by each ripe melon or freshly baked bagel, by each box of cereal or tray of boneless skinless chicken breasts.' This time, we are all implicated."

"So, yes, cheap food can be nasty, not to mention bad for farmers and the environment. Yet it has one great advantage that neither Patel nor Roberts fully grapples with: people can afford to buy it. According to the World Bank, four hundred million fewer people were living in extreme poverty in 2004 than was the case in 1981, in large part owing to the affordability of basic foodstuffs. The current food crises are the result of food being too expensive to buy, rather than too cheap. The rioters of Haiti would kill for a plate of affordable chicken, no matter how pale, soft, and exudative. The battle against cheap food involves harder tradeoffs than Patel and Roberts allow. No one has yet discovered how to raise prices for the overfed rich without squeezing the underfed poor."

Read it! Weeping optional.
Posted by Mae Travels at 8:30 PM

This is something I've been giving enormous thought to as of late. My solution is moving towards locavorism (if that's a word), and supporting small and biologically diverse farming. I think we need to return to small farming methods in order to get the variety of foodstuffs to a more sufficient point.

Also, our corn needs to be raised for people, not fuel. One of the big issues is our dependence on automobiles.

Okay, off my soapbox now.

BTW... got "Stealing Buddha's Dinner" from the library and I love it. Great book - thanks for the recommendation!

There are at least three problems:

1. The challenge of avoiding dangerous food of all sorts -- mercury in fish, antibiotics in chicken, mad-cow in beef, e-coli in spinach, bad Chinese additives in apple juice, too much fat and corn syrup in packaged food, etc. For a person of decent means, in a city like Ann Arbor, options exist if you can muster the money, time and energy for careful shopping. If you are poor or preoccupied, see 2.

2. The challenge to the nation of maintaining a safe food supply in all senses. Our leaders have abdicated many responsibilities of regulation. This is a political problem, that also involves personal motivation. I think this may be a solvable one, though some proposals seem so inadequate as to be a cop-out -- like putting calorie counts on menus but doing nothing to offer better choices at good prices.

3. The challenge to the whole world of meeting the food needs of the poorest nations and the poorest people within each nation, as well as improving all sorts of quality of food for all. For this, there are no personal solutions, and the politics really seem overwhelming.

I think this New Yorker article touched on all three. They are related problems, but not inseparable, IMHO.

Man, do we need to just get back to the basics in more way than one. I hate to say I'm scared, but really, I am.

I love your blog! So enlightening and smart. I'm going to keep poking around!