"Let me illustrate... with a recipe for broiled red snapper. I created it some time ago as a sort of by-product of another dish that I was preparing at the moment. The genesis of this recipe has a further value. It shows a cook at work, experimenting with ingredients that he thoroughly understands and the quality of whose synthesis he can confidently predict." (p. 186)

These words from The Unprejudiced Palate by Angelo Pellegrini demonstrate why I find him a tedious, tendentious self-advertiser -- this must be the millionth time in the book that he mentions that he is a skilled cook. Everything he does, in his view, illustrates his confident competence.

In addition to being vain, he's an incredible male chauvinist of the worst old-world self-unaware school. Although his book dates to the 1940s, he has no use for the many achievements of women to that date, and more important, he views the women of America as incompetent, lazy, and inadequate to his lofty European standards. Here is a typical paragraph about the American housewife:

"If excellent meals require exotic and unavailable ingredients, endless hours in the kitchen, and a lifetime to perfect, Mrs. Jones is content to whet the can opener and concentrate on bridge. But she cannot consistently ignore the call to culinary self-improvement. To meet special occasions she will now and then hazard an invasion of the sacred precincts. After a hectic shopping tour... she advances gaily into the kitchen and takes a snort of this or that -- whichever she happens to have on hand -- to bolster her morale and quicken the imagination. A survey of her posts and pans reveals that they are woefully inadequate. Quaking with a sense of impending failure, she begins to mince and saute, simmer and strain. Her nerves kept in perfect equilibrium by her favorite cigarette, she meets each crisis as it emerges. Well in advance of the dinner hour, each little culinary symphony has received the final blessing, and the casseroles gurgle all over the stove." (p. 10-11)

I'll spare you any more of this! His contempt is so great he needs only hypothetical or fictitious examples of the degraded American woman to offset his vast superiority. When Pellegrini gets on the subject of American cookbooks and American housewives, or above all, of American working women, he becomes really offensive. It's a clue to his attitude that he never actually names a real cookbook or real anecdote: everything is a generalization about the superiority of his way, the inferiority of what he has seen in America.

Pellegrini delights in contrasting his Tuscan peasant childhood with the west-coast decadence and lack of taste he discovered later in his life, as a college student and professor. In the parts of the book where he sticks to his Italian memoirs, one can find lots of fascinating food facts about the unvarnished Mediterranean diet, as well as about the life of peasants in Italy before it became prosperous. His descriptions of wine-making are especially fascinating. I enjoyed his explanation of why polenta wasn't much of a treat as served without meat or flavoring at a peasant's table, though it was becoming a gourmet item in America. Even when he's engaging in self-congratulations about his ingenuity in making money to offset his family's poverty, even when he's quoting corny Italian proverbs, his memoirs are interesting.

When he gets to America, though, his observations become less penetrating. To quote a review on the amazon.com site: "He writes as if he was the first immigrant to come to America, the rest of us have been here forever clutching in our greasy paw a hotdog in one and a can of cream of mushroom soup in the other."

What really bugs me is that he can't present a recipe without continually making note of his superiority as a gardener, cook, and man of the world, and without putting down some American straw man (or more likely, straw woman) who uses inferior and tasteless ingredients, overcooks the pasta, deep-fries the delicate sole, doesn't like garlic, turnip greens, or kale; has never tasted rabbit or artichoke; or commits some other heinous culinary offense. That said, they may be good recipes, but there's no lack of good Italian peasant cookbooks these days.

His wrap-up attack (Chapter 6) on the American fried-chicken dinner is the least hypothetical of his diatribes, as it's based on an experience with a 4-H banquet from his youth. Most people would feel that the choice of frying, grilling, or roasting chicken, and the choice of biscuits or Italian bread were matters of personal taste. Most of the cooks he despises would simply not like the result of his suggestion to add chervil to fried chicken. For this author taste that differs from his is a moral failing -- "I am insisting upon old-fashioned virtues." (p. 234)

In the Conclusion, Pellegrini claims that he has simply explored "the significance of bread and wine," (p. 230) -- but this is false naivity on his part. The book is full of judgments and advice.His observations on American abundance and waste weren't all that original even in 1948. 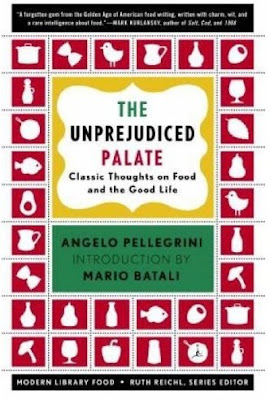 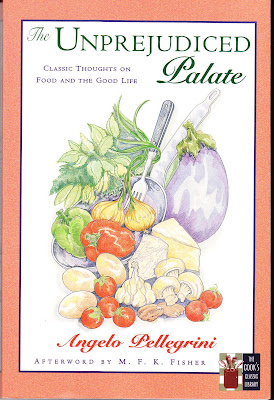 I wonder that this passes for a classic -- the edition I own has now been replaced by one with laudatory notes by both Ruth Reichl AND Mario Batali. Give me the works of Pellegrini's near-contemporaries M.F.K. Fisher and Elizabeth David any time! For a real treat, read M.F.K.Fisher's afterword to the Lyons & Buford edition -- she describes her actual meeting with Pellegrini at a wine-tasting where he reviled her for wearing perfume -- only to discover that he was smelling the odor of the soap he used at his motel.

There's certainly a lot of nostalgia, as well as irony, in reading this historical document, but I wouldn't recommend it unless you are really doing research.

Wow. Real interesting read. You've actually made me want to read this book just so I can see if I feel the same way as you.

Thanks for sharing this link. With me. Reading your post caused my blood to boil all over again. Damn that man Lol

Agreed. I just have to laugh at your commentary. True. All true!

Thanks for sharing the link. I can totally see your point of view. I probably gave him a few brownie points for being an English professor (and a Tuscan immigrant). :)