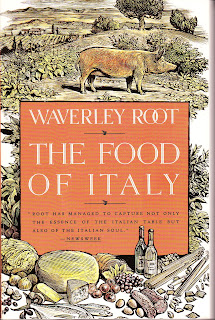 Are you planning a trip to Italy? A reading project about an aspect of Italian life? If you plan to go even slightly away from the big, crowded tourist attractions, there's a 35-year-old classic book that can give you some unusual insights. In The Food of Italy, Waverley Root presents Italy's distinguished past as background for the development of Italian cuisine. Root connects amazing details about the foods produced and served in each region to the cultural past. These details can be overwhelming, but also fascinating.

In Root's introduction to Sicilian cooking, for instance, he begins with the ancients. "Archestratus," he writes, "was a Sicilian, born in Gela early in the 4th century B.C. He has been called the Brillat-Savarin of ancient times, though Brillat-Savarin was deadly serious about a subject which Archestratus treated lightly in his mock heroic poem, Gastronomie.... In typically Sicilian fashion, he interested himself particularly in fish. Yet little trace of Greek cooking ... remains in Sicily." (p. 596)

Then he gives all sorts of details about the most famous Sicilian sweets, caponata, couscous, pasta with sardines (only in Palermo, you'll learn, the photo shows some I had last summer), and all sorts of mouth-watering vegetables and meats.

Most writers view Italian history as a progression of accomplishment in art, music, literature, and political innovation, from the era of the Etruscans (who, Root notes, perhaps invented pasta), through the Greeks, Romans (whose banquets are of course legendary), the Renaissance (when popes led the world in fine dining and gluttony), and into the 20th century.

Root presents each region's specialties and agricultural products with scholarship and humor. Concrete material on agriculture and cooking technique as well as legends, plays, and poetry all contribute to the narrative. You can learn a lot about pasta, in passages like this:

"The ring shape of tortellini suggests to the Bolognese mind the human navel -- or more exactly the feminine navel, for it does not seem to have occurred to anyone that the male umbilicus possesses inspirational qualities. Obsession with this resemblance has produced a number of stories about the origin of tortellini which contribute little to history, but do shed some light on Bolognese psychology. A 17th-century story is the simplest: it maintains that tortellini was born when a cook molded his pasta directly in the navel of a Bolognese woman. The image is fetching, but the exact process by which edible pasta could thus be arrived at is not easy to figure out." (p. 195)

Root goes on to cite literary sources in which the navel origin of pasta plays a role. Similarly, Root grounds his disquisitions of food and wine in details about the leaders of the land; for example, when describing the foods of the region north of Rome, he writes that eels become so tasty in the waters of Bolsena "that they led Pope Martin IV into the sin of gluttony. He was from the Touraine, where matelote of eel is a much appreciated dish; but this was not considered an extenuating circumstance by Dante (anti-French anyway) who punished him by placing him in purgatory in the Divine Comedy." (p. 99)

Another papal story: "In the 14th century, an offbeat gastronomic note was inserted into history by one of the less admired members of the powerful Visconti family, then ruling Milan. This was Barnabo, who had been excommunicated by the pope." This tyrant forced the monks who represented the pope to eat the bull of excommunication: "parchment, ribbons, seals and all." While the bull didn't poison the monks, Barnabo himself was poisoned somewhat later. A food story? Well, maybe. (p. 257)

Root often digresses from his vivid descriptions of the many dishes from every region of Italy. "In ancient Roman days, as in ours, a whole roast pig was customarily served with an apple in its mouth, and the apple was likely to be Picenian. Horace described Picenian apples as small but exceedingly tasty, whose like could be found nowhere else. A few centuries later another famous writer, Boccaccio, praised Picenian salame, whose superiority he attributed to the fact that the sausage casings were made from the intestines of the same pig which produced the meat." Delightful digressions! (p. 129)

It's impossible to summarize his work, as it's encyclopedic. In reading it -- preferably one regional section at a time -- you realize numerous connections in Italian culture. The Renaissance, for example, was a rebirth not only of art and literature, but also of food; Root shows you exactly how this truism might apply to your dinner, if you find the right small, non-touristy restaurant. The Romans left an indelible mark on the land and its food; you'll be more likely to notice the marks if you read the book.

Almost at the beginning of the book, Root writes: "while French cooking has become professional cooking even when it is executed by amateurs, Italian cooking has remained basically amateur cooking even when it is executed by professionals. It is, in short, home cooking... human, light-hearted and informal." (p. 18) Throughout this work, I appreciated the range of specific details that demonstrated how Italian cooking comes from the people.

This looks fascinating. Another for my ever-growing stack of summer reads!