The latest online feature at Gourmet online: The 25 People Who Changed Food in America. 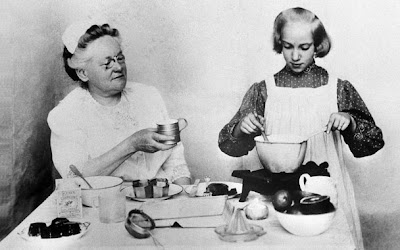 This pictorial series begins with Thomas Jefferson, who "pursued an informed love of fine food both at Monticello and at the Presidential mansion."

The series seems to me delightful in its range of choices. Most of them are well known, though a few have been forgotten with the passage of 100 years or more.

Cookbook authors are not neglected: two of them include Julia Child, and Fannie Farmer -- whose photo I included. John Harvey Kellogg, Fred Harvey, and Ray Krok of MacDonald's illustrate the influence of food titans. I loved the selection for its imagination and variety. I won't hold it against the editors of Gourmet for including Earle R. MacAusland (1891–1980), magazine publisher who in 1941 founded the magazine itself. After all, it's still publishing both in paper and online after all these years.
Posted by Mae Travels at 1:01 PM

This looks like a fascinating series - I'll have to check it out!

Wonderful post! Thank you so much for pointing me towards this series. It's so easy to forget the old 'greats' in a world of idiots like (sorry if anyone respects and likes these people!) rachel ray, sandra lee and guy fieri who do things BAM'd up and in less than 30 minutes. I look forward to learning something new with this series.

Thanks, we-are-never, it's good to hear from you. I hope to find some interesting issues on your blog!