Cheesecake on the Coasts

It's food section day in the major daily newspapers that I read online. Last night I read the week's food feature in the L.A.Times: Old-fashioned cheesecake. My mouth watered as I read and looked at the incredibly appetizing photo (right).

If I had had the ingredients I might have started baking right away, though I admit, cheesecake requires much too much in the way of deferred gratification. In fact the instructive part of the article said to wait a day or even two so that the cake sets up and can be easily sliced. The next time I pass a bakery counter, though... And doesn't this paragraph sound both interesting and yummy?

"Cheesecake has that kind of power; it also has range. Stamped with an ancient provenance (Alan Davidson reports a description of a Roman cheesecake in Cato's 2nd century 'De Re Rustica') and European pedigree, it's made with ricotta in Italy, quark (a fresh curd cheese) or farmer cheese in Eastern Europe. And the distinctive texture and clean flavor of classic American cheesecakes comes from silky smooth, creamy but tart cream cheese." 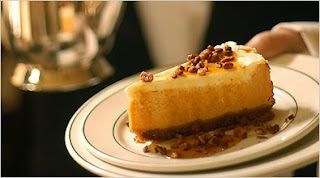 What I wondered is this: does L.A. have its own special kind of cheesecake? I suspect it does. I remember it as quite often available in California.

This morning in the N.Y.Times food section -- a compendium of past articles titled Times Topics: Cheesecake. The list was illustrated with several tempting photos (one at right). The articles listed are all at least a couple of years old, and many deal with a fight over who invented some New York classic version of the dish. Not nearly as mouth-watering.

Although I'm a faithful reader of the N.Y.Times and its food section, I've rarely been to the city and have little interest in its priority claims about foods. I suspect that all New York foods originated with the diverse population one way or another. (In preference you can find me almost anywhere else: Hawaii, Washington D.C., Australia, New Zealand, Paris or London... just not New York.)

Anyway, I wonder if the food editors in New York noticed the L.A.Times article and put in this retrospective to stay competitive. That would be funny. The Washington Post isn't evidently playing the game: their food section leads with morel mushrooms, and their weirdness article of the day is on raw reindeer meat (in case you thought we hadn't gone off the deep end last week with yak cheese.)

I think the real debate about cheesecake (and I'm a native NYer) is whether or not it is baked/firm or very creamy (a la Sandy Ryder's era at Say Cheese). That unbaked stuff doesn't even cut it as far as I'm concerned (not the Sandy version, I mean the REALLY unbaked stuff, like the jello version). Both of the creamy/firm cheesecakes can be sublime. In San Francisco, the classic cheesecakes there are more like classic NY cheesecakes, but I don't know about LA.

My favorite, personally, is the less sweet Italian ricotta-style cheesecake.

Not that you needed all this info. ;-)

I'm proud of the Wash Post for being seasonal. And I'm a little biased b/c we're having a mushroom recipe contest and mailing the winners 2 lbs. of morels (the Wash post printed this as well). If want to enter, we'd love to have a recipe. We already have one mushroom cheesecake that sounds mighty delicious, but maybe you could top it! Recipes can be submitted to our blog: MarxFood.com