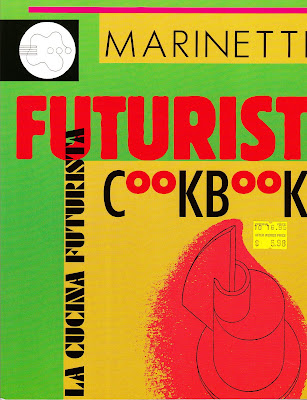 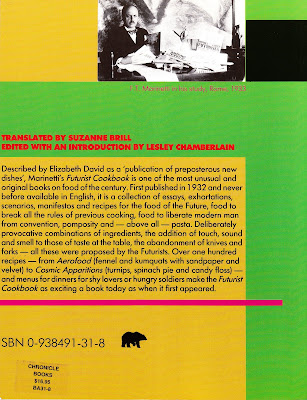 The Futurist Cookbook by F. T. Marinetti, published in 1932 denounced all forms of pasta and called for a new, bold type of cooking. Here is example from a futurist meal he imagined:

The second course consists of four parts: on a plate are served one quarter of a fennel bulb, an olive, a candied fruit and a tactile device. The diner eats the olive, then the candied fruit, then the fennel. Contemporaneously, he delicately passes the tip of the index and middle fingers of his left hand over the rectangular device, made of a swatch of red damask, a little square of black velvet and a tiny piece of sandpaper. From some carefully hidden melodious source comes the sound of part of a Wagnerian opera, and simultaneously, the nimblest and most graceful of the waiters sprays the air with perfume. [From Marinetti: The Futurist Cookbook, translated, Suzanne Brill, 1989]

Before I continue, perhaps you need a brief summary of this 20th century cultural movement that had its origins in Italy about 100 years ago, developing in Italy and Russia with strange resonances to Fascist thought:

FUTURISM was one of the longest lived and broadest encompassing artistic movements of the 20th century, although it tends to be denied the importance it deserves because of its political associations.

Many of the early Futurists were anarchists, the movement was welcomed by Gramsci and emulated amongst the Bolsheviks, but it was the association of Futurismo with Fascismo that has left it somewhat tainted amongst progressives. This is ironic in that Futurism was the quintessenence of 20th century modernism and paralleled 'the cult of the new' exemplified in Lenin's dictum "socialism + electricity = communism". Although Mussolini's regime utilised modernist traits, it was more at home with the neo-classicism of Novecento.

Although mainly associated with the visual arts, Futurism began in 1909 with the proclamation of a manifesto by the Italian poet, Filippo Tommaso Marinetti (1876-1944). The manifesto not only celebrated the dynamism of the machine age but strongly negated the past: "We will destroy the museums, libraries, academies of every kind..." [From "The Challenge of Futurism," Flux Magazine]

BUT I say that it did. And most bizarrely, the food preparations and presentations in The Futurist Cookbook that were meant only as an exercise in imagination, closely resemble food that many critics in the last 10 years have been thrilled to consume at expensive restaurants.

These meals -- that I've only read about -- come from a food trend called Molecular Gastronomy. Its principal inventor, Ferran Adrià Acosta, prefers to call it deconstructivist cooking. Adria is particularly known for making unexpected substances into foam -- foamed espresso, foamed mushroom and foamed beetroot are among these products.

His tortilla de patata, which in every other Spanish restaurant is a potato and onion omelet, is served in a martini glass and is liquid and foam. You are handed a spoon and told to dip it all the way to the bottom with each bite. You plunge through a white potato foam into a soft pudding of egg and caramelized onion. In his chicken curry, the curry is the solid, the chicken is liquid. [Amanda Hesser, "In Spain, A Chef To Rival Dali," New York Times, 1999]

Adria, whom you've probably read about, is widely imitated and his techniques, such as foaming, cooking in a vacuum, and creating little spheres from liquids -- a sort of fake caviar of arbitrary taste -- have been widely imitated and commercialized. The Chicago restaurant Alinea is one American version. Here are some futurist courses from an Alinea menu described a few years ago at its opening:

The first course was a visually nifty riff on a peanut butter and jelly sandwich: a peeled, heated grape, still on a sprig, that had been dipped in a peanut purée and encased in a thin layer of brioche.

A later course paired slivers of rare beef with an undulating sheet of potato, which became a jagged landscape with discreet canyons and buttes of molasses, raisin purée, dried garlic, dried tomato and more: the flavors of A.1. steak sauce, candidly acknowledged on the menu.

...There was a deconstructed Caesar salad, a deconstructed guacamole and a "deconstructed glass of white wine," which was a translucent rectangle of grape jelly with pinpricks of herbs, nuts and fruits often evoked by wine. I was instructed to taste each and guess its identity. [Frank Brunei, "Sci-Fi Cooking Tries Dealing With Reality," New York Times, 2005]

This is much more weird than life following art. Surely I'm not the first to notice.
Posted by Mae Travels at 3:08 PM

This is a riot. I have to show this to my friend from college. We went as a Futurist sculpture to Halloween at the RC, back in the day...