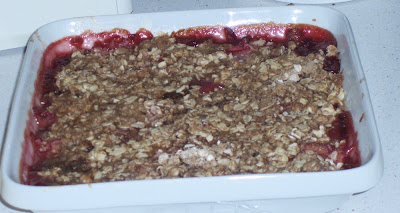 I love rhubarb. The crumble in the photo, which I baked this evening, was really good. Do you remember the Laura Ingalls Wilder story about how, as a young bride, she made pie from rhubarb (she called it pie plant) and forgot the sugar? I think Almanzo ate it anyway: just sprinkled some sugar on it.

According to the Larousse Gastronomique, my favorite culinary reference, rhubarb originated in northern Asia. Its first European use was by monks, as a medicinal plant, in the 14th century. This normally impeccable source claims that you can eat the leaves "like spinach" -- totally false -- they're poisonous!

A quick web search turned up the technicalities of this well-known danger: "Oxalates are contained in all parts of rhubarb plants, especially in the green leaves." The stems, explains the website, have a very low level of this toxin. "During World War I rhubarb leaves were recommended as a substitute for other veggies that the war made unavailable. Apparently there were cases of acute poisoning and even some deaths." From The Rhubarb Compendium. 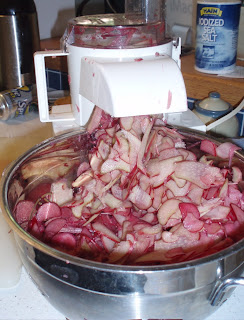 The recipes in the Larousse Gastronomique suggest cutting peeled rhubarb stems into 2 to 3 inch pieces when you make compote, jam, or "English-style" pies and tarts. My mother did it this way, and her rhubarb compote was delicious but full of stringy things around 2 or 3 inches long. I am in the habit of using the food processor to make extremely thin slices of rhubarb -- as shown. This process is very fast, avoids the need to peel the stems, and thus preserves the beautiful red color. Also: no strings! I also pour a kettle of boiling water over the slices to reduce the acidity.

To Assemble and Bake:
Butter the pan and spread the chopped strawberries in it. Place rhubarb filling in pan, and sprinkle topping evenly over the rhubarb. Dot with more butter. 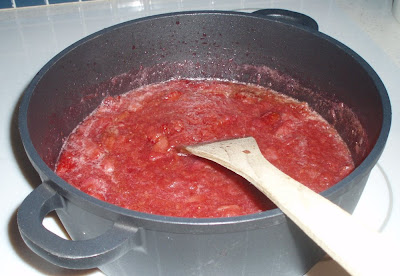 I bought a lot of rhubarb, and prepped it all at once. While my crumble was baking, I made a pot of compote (AKA rhubarb sauce) from rhubarb, strawberries, and sugar. Cooking the very thin slices goes fast. It was done quite a bit before the crumble. I added a bit of vanilla after cooking. Isn't the color beautiful? We'll eat it later: it keeps in the refrigerator.

Finally, when I open a book like the Larousse Gastronomique, there's no telling what I'll find. Here is an obscure and silly fact: the entry just before rhubarb is rhinoceros, whose flesh "is edible." In fact: "It is preferred," says this revered source, "to that of the elephant by natives who consider hippopotamus meat to be even better." I wonder if that's more accurate than the claim that rhubarb leaves are edible.
Posted by Mae Travels at 7:58 PM

Just thought I'd let you know that I linked to your blog. I write a Laura Ingalls Wilder blog, and I never knew what pieplant was.

Hi Sandra,
I'm glad you learned what pie plant is. Your blog looks interesting, though I didn't find the link to my rhubarb comments.

For an interesting discussion of the Wilder books from the food point of view, I suggest the unexpected book "Stealing Buddha's Dinner" -- I blogged about it a couple of weeks ago.

Sorry--I forgot I'd set it to upload a bit later than when I wrote it. It's there now.

Thanks for the book rec. I'll check it out.

I made it with gooseberries and it turned out great!