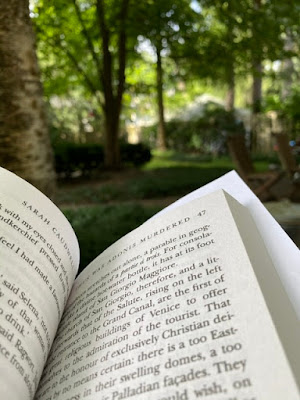 The weather this week has been beautiful and just the right temperature to sit outside and read a book. The book I read: Thus Was Adonis Murdered by Sarah Caudwell.

There's only one word for the style of this book – here defined by the Oxford UK dictionary:

Mid 17th century from arch-, by association with the sense ‘rogue’ in combinations such as arch-scoundrel.
The narrator of Thus Was Adonis Murdered is an academic scholar named Hilary Tamar.  At the beginning, Hilary and his friends, a small circle of lawyers based in London, receive the news that their colleague and friend Julia Larwood has been detained for questioning in Venice, accused of murdering one of the other participants in a week-long art tour. Hilary and the lawyers determine that they must rescue Julia.

From the beginning, Hilary writes in a highly exaggerated style; moreover, Julia's letters to Hilary and the lawyers, which tell most of the story, reflect a similarly affected and condescendingly nonchalant style. Besides their rather annoying superciliousness, the characters are pretty self-centered and consistently self-congratulatory. Thus the book, in my opinion, is arch.

For example, Hilary writes, as they are discussing how to obtain information from some of the art tour participants, now back in London, who may have by chance seen or heard some evidence to help free Julia:


"However things may be done in Cambridge, in the metropolis it is unfortunately not possible for one private citizen to arrive unannounced on the doorstep of another and to submit that other to a rigorous interrogation, using, if necessary, rack and thumbscrew. I asked if any of them might know anyone sufficiently acquainted with either suspect to enable us to make a more sophisticated approach." (p. 199)

Or a conversation between Hilary and one of the other amateur sleuths:


"'Benjamin,' I said, 'when you make these remarks ... are we to take it that they have some basis in fact?'

In spite of constant artifice in narrative and dialog, the novel manages to build suspense, and the plot about the characters' thoughts and actions is surprisingly well developed. From the start, my curiosity was piqued, and I read the whole book, attempting to ignore the most irritating stylistic choices.

Clearly, this novel could easily be unbearable. But it didn't go that way, at least not for me, not this time. You might have a different reaction, and be either less bothered or more bothered!

What a beautiful setting in which to read a book!

Reading outside is the best. I am still finishing Labyrinth and then I need some mystery in my life.

I read several of her books back in the day, having found them together in a used book store. I thoroughly enjoyed them at the time and held on to them for potential re-reading, but when I Marie Kondo-ed by shelves they didn't make the cut. I think I tried them at the perfect time, but it wasn't a time that lasted for me...

I loved the four books in this series by Caudwell. Arch is a great word for them. I was quite intrigued by the actions in the courts. We had a big debate as to whether Hilary was a male or female and I decided on male. It appears you have too, from the tense in your review. But it really is never made clear. If you find a specific spot where Hilary is referred to as he or she, let me know.