Dionysus was the Greek god of wine. His Roman alterego was Bacchus. Classical depictions of this god often make him young and very beautiful -- though at times, he appears as a rather degenerate older man. In Greek depictions, he was often shown with his followers: a group of human revelers who often appeared in a celebratory procession. These were called the thiasus or thiasos of Dionysus. Dionysus is also shown with cheetahs or leopards, which pulled his chariot or otherwise accompanied him.

Non-human revelers in Greek or Roman myths and images of Dionysus and Bacchus included dancing girl-nymphs called maenads and male satyrs, which had human heads and bodies with horse-like ears and tails. They were a pretty wild bunch! A Bacchanal is still the name for an orgy-like party.

Bacchus in the Renaissance 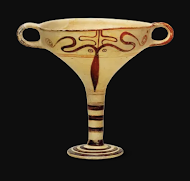 Perhaps the fermented beverage that Greek and Roman gods and humans drank didn't taste just like the wine we enjoy these days. In ancient Greece it often had the taste of pine resin, which lined and sealed the terracotta amphoras used for shipping and storing wine. We probably wouldn't actually rate it very high! So although I wouldn't want to drink their wine, I find the ancient Greek and Roman myths about it very appealing and I really like the gods and mythical tales that personify the glory of wine.

I'm sharing these portrayals of Dionysus and Bacchus and their wine cups with Altered Book Lover and the many followers of her blog who share their ideas and images about drinks each Tuesday.

I think the wine probably tasted better than the water. I didn't know what Bacchanal meant so thanks for enlightening me.

Perhaps their palates were quite different from the tastes we are used to today. I have been drinking more wine lately after dinner but I don't think I'd like the pine resin at all!

Interesting post and I enjoyed reading it
Happy T Kathy

Fascinating reading on Bacchus and a nice romp through some historical views of him. This is a great T day post as it I always fun to see something a little different. Have a fabulous Tuesday Mae. Hugs-Erika

Dionysus and Bacchus were fun to read about. Bacchus really was depicted as beautiful in several of your examples. I really enjoyed learning more about these gods and their possibly tasteless wines. I can always count on you to give us something outside the box when it comes to T Tuesday, dear Mae. Thanks for sharing Bacchus in art.

Guess they knew how to party!

Very interesting post about Bacchus, thanks for sharing. Happy T Day, have a good week and stay safe!

You delighted me with your post about Bacchus/Dionysus. In the renaissance picture and the Pompeii fresco, Bacchus looks sloshed (inebriated) already. Clever how the painter can depict that. In the Titian, Bacchus is so drunk, he falls out of his chariot! I'm surprised Ariadne ever agreed to marry him!
Happy T-Day,
Hugs,
Lisca

Very interesting, Mae. People's palates adjust to whatever they're raised on. The Greeks and Romans wouldn't have had bacchanals if they didn't like the pine resin flavor. lol.

I enjoyed your images. The myths as we heard them as children are pretty tame compared to fuller, more descriptive versions. Party on! Happy T Tuesday

Greek and Roman gods sure knew how to party. I enjoyed seeing the artwork, too. Happy T Day

I always enjoy that I am able to learn things on our visits for T Tuesday.
Happy T day!

This is a very good post. Lots of information I didn't know. Thank you.