Skipjack, albacore, bigeye, yellowfin, Atlantic bluefin, Pacific bluefin, and southern bluefin tuna are the principal species in the tuna family. They vary widely in size, in scarcity, and in culinary desirability. Bluefin tuna, mainly fished for their use in sushi, are very large, and very expensive -- and also under extreme threat of becoming extinct. Some of the smaller and more common tuna types, such as albacore, though heavily fished, are at much less risk. In general, tuna play a large role in ocean ecosystems. Tuna also play a large role in American nutrition. (source)

In recent months, I've been trying to revisit my choices of foods, and to develop a better sense of responsibility in what we eat. I'm looking at the issues of health and nutrition, of ecology and climate change, and of the welfare of workers in the food industry including faming, fishing, food processing, transportation of food, and many jobs in food stores. It's a big job! Today, I'm thinking about tuna, particularly canned tuna, and I’ve been reading about the history and current state of the tuna industry.

Tuna canning in America began around the turn of the 20th century, and continued to grow for most of the century. Tuna was a staple for Americans from virtually all ethnic groups, with use by a very high percent of households: "For nearly nine decades, Americans ate more and more tuna out of tin cans. For nearly five decades — from about 1950 until 2000 — tuna, almost all of which was canned, was the most popular seafood in the United States." However, between 1990 and 2010, Americans' tuna consumption decreased from 4 pounds per person per year to just 2 pounds. As the industry grew over time, the original numerous small tuna canneries slowly consolidated into just a few, and began to engage in collusion to drive up prices. This year an executive of one company has even been convicted of illegal price fixing. (source, source)

After a decline in the early part of this century, tuna sales seem to be going back up now. Specifically a study from Fortune Business Insights reports: "Consumers are highly dependent on ready-to-cook and ready-to-eat food products due to the convenience of cooking offered by them. The rise in working women population and the less time spent on cooking has led to wide utilization of canned tuna. The millennial population is highly inclined towards such convenience food products as it is easy to prepare, nutritious as well as saves the food preparation time. Many manufacturers are focusing on launch of new products and certifications to provide the consumers with quality products and for serving them better." (source, source)

Despite the legal setbacks to specific producers, overall the market for canned and packaged tuna has been growing for a few years, and the market changes caused by the pandemic have driven up demand for all canned products, tuna included. Collectively, the tuna industry production totals in the tens of billions of dollars per year; though total consumption is still down, the value of tuna purchased is up because of higher prices and higher quality of the product. Here's a graph of recent and projected growth: 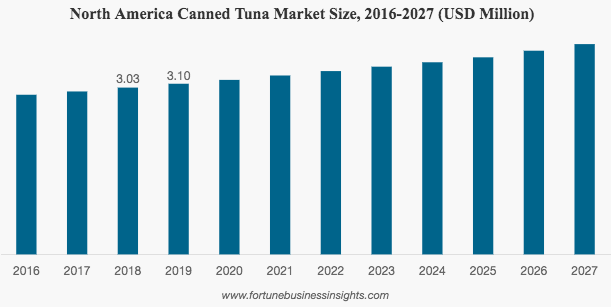 As for me: tuna salad is one of the easiest recipes in my repertoire -- a can of tuna with mayo, pickle relish, maybe chopped onion or celery, maybe hard boiled egg. We like it in a cold sandwich, as a classic tuna melt, or just as a salad with other veggies. We also like the Italian-style salad made with white beans and tuna. Another favorite: the French Salade Niçoise -- tuna, tomato, olives, green beans, pommes à l'huile (French potato salad), optional anchovies. A famous American classic, though I don't make it myself, is the tuna hot dish with cream of something soup and noodles. With all the challenges to grocery shopping we're facing these days, these pantry-shelf recipes are surely more valuable than ever. Tuna sandwiches (maybe made directly from a pouch, maybe by adding your own mayo) are still a mainstay of lunches throughout America.

Issues about the rights and wrongs of eating tuna are numerous. Is it safe to eat tuna? Especially, is there a risk of mercury contamination? Is tuna environmentally responsible? In particular, are dolphins being killed by nets that capture the tuna? And are the tuna in oceans throughout the world being irreversibly fished out, leading to many ocean-wide problems? Is the price going up, making it less and less affordable? Finally, are the fishermen on the tuna boats taking terrible risks of infection from coronavirus? Answers to these questions are disputed: the fishing industry trade association denies the warnings from consumer and environmental organizations, while most other organizations suggest caution with regard to mercury in tuna and strongly recommend responsible methods of fishing.

Except for the self-serving National Fisheries Institute positions, most analysts recommend pole-and-line or trolling methods of fishing, which would mean purchasing tuna labeled to have these methods, and recommend albacore or skipjack species of tuna. The extreme vulnerability of the bluefin tuna isn't relevant to the discussion of canned tuna, as these giant fish are used only for sushi (but you might want to think about this if you do eat sushi). The "Eat This Not That" website points out:

Yes, I’ve been buying recommended ethically fished and handled canned tuna brands, namely Wild Planet and Whole Foods 365 brand, for some time, but I try to revisit these decisions occasionally in case the situation changes.

How interesting! I learnt a lot about tuna today. I love tuna. But here in Spain it is very expensive. Tuna comes in small tins of 80 gr each and that is 56 gr netto. They come mostly in vegetable oil. I have to make an effort to find tuna 'au natural', in water. For the two of us I would need three tins. And that's expensive. I can also get frozen tuna steak. That seems so different to tuna in a tin. I buy that too and use it in a different way. Well, as a steak really. It actually tastes like meat. Hubby doesn't like fish much but he will eat tuna steak.
Anyway, thank you for your tuna story.
I'm sorry I'm late in commenting. My laptop has decided it does no longer wants to use Chrome or Internet Explorer and I have not been able to comment. I have an iPhone but I've tried commenting before and most comments don't arrive. So I am looking for someone to do me a blog on Wordpress (the free version). If you know of anyone who could do that for me and is reasonably priced, please let me know. I have tried myself but I have not succeeded.
Happy belated T-Day,
Hugs,
Lisca

Thank you for making us readers aware of what goes on in the canned tuna industry. I live an hour away from the Monterey Aquarium and have been aware of their Seafood watch .

Oh I love Tuna whether it be canned or fresh! But to be honest, I really loved canned tuna much more, does that make me weird? haha Tuna is one of our major exports here in the Philippines, with the tuna in our southern islands being dubbed as one of the bests in the world. I once was in Tsukiji market in Tokyo, once was the world's largest fish market I think, and some of the higher grade tunas there were from our country and it felt nice to my heart. Oh the sashimis there are so expensive but my cousin treated me so it was a great experience to be on an authentic sushi bar.

Love the Tuna dish you prepared for lunch! I shall do that too (minus the onions because another weird thing about me, I'm not fond of onions. But those garden herbs are so much love!)

Sending you hugs from here Mae!

I love tuna :-) but don't eat lots of them because of its high mercury. I guess I just need to find the right brand to try.

We call it dolfin friendly tuna here. We have a strict season and all species are pole caught. I've had skipjack fresh and the tinned version is much better. It is a staple pantry ingredient at work. Our fishing industry has had a few cluster cases, but nothing more than one could expect from close quarter living. Stay safe.

I like tuna, canned.
We have labels for safe tuna (but can you trust them?).
So many ready to go tuna-salads in cans.
My Dad hated fish and once my Mum got fresh tuna and presented it to him as "steak" and he ate it in delight, no idea it was fish.

I had a discussion with a friend and we agreed... you never know what´s in the food, how animals are fed.
Just yesterday I saw a docu on a woman who eats but raw animals. Fish-heads included. I´ll have a banana today!! ;-) And even on that front you have no idea if chemicals were used...
All you could do is farm yourself. We have but a small balcony, though...

I like canned tuna, but I always make tuna salad with it, never anything else lol I guess I'm stuck in my ways...

I do love tuna, I eat it at least once a week for lunch. With some gluten free crackers and I like to add some hot hoagie spread on top of the tuna. Sometimes I mix the tuna with lettuce. I've been meaning to try a nearby Whole Foods store, it is at least a 30 minute drive away.
Take care, enjoy your day! Have a happy weekend ahead!

This was, as usual, a terrific and informative post, Mae. I always iiked tuna (especially fresh! Rare to cook, and rare to me). But tuna salad -- YES! And it's good thrown into a lemon/olive oil/capers pasta for some protein. When meat packing plants got ugly this winter, I ramped up the tuna. Thanks for teaching me more about it.

I love tuna sandwiches. And ahi tuna, and tuna ceviche.
I do worry about the mercury but we don't eat it that often.

It's been quite a while since I had canned tuna. Tuna melts and casseroles were once a favorite of mine but Doug isn't a fan of the tuna. We had some freshly grilled but that's been a while too.
There are always debates about overfishing. Everything in moderation.

Between all the issues of farming and manufacturing tuna in the tuna industry as well as the very high mercury content, I haven't eaten it in 40 years! Thank you for raising consciousness mae!