"Love After Love," a Novel Set in Trinidad 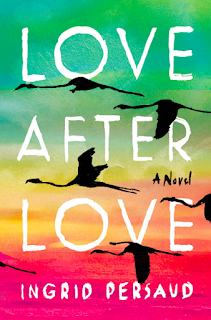 Love After Love by Ingrid Persaud (published earlier this year) really is a book about love. Told in first-person chapters by three characters: Betty, her lodger Chetan, and her son Solo, it is both amusing and sad as it develops their story over a number of years. The settings for the book are a town in Trinidad and a poor immigrant neighborhood in New York City. The characters are very vivid and interesting. They talk to the reader in a non-standard English, a version of the local dialect of Trinidad but modified, I assume, to make it completely readable by outsiders like me. The New York chapters offer a very interesting set of insights into American attitudes towards immigrants and how these marginalized people deal with American challenges.

Rather than write a review of this enjoyable novel, I'm going to focus on wonderful food scenes that help create the fascinating atmosphere of this book. The characters' cooking combines traditions from several Trinidadian communities: European, African, and East Indian. Betty and Chetan use local island produce, herbs, and fish and spices along with cooking techniques from India, where their ancestors came from. So their cooking reflects a lot of things, both personal and cultural.

Soon after Chetan moves into Betty's room-for-rent, he begins to make meals for the three of them:


"Two of us coming home from work, same tired, so I took over the cooking three times for the week. As it’s Sunday I decided to do my nice steamed kingfish, callaloo with salt meat, rice, and, just for Solo, a macaroni pie." (Chetan, Kindle Locations 339-340).

Chetan also sets up a garden, growing vegetables and herbs in steel drums:


"By next month-end we should be feasting on our own fried okro with hot sada roti or using it to make callaloo soup. The pigeon peas, pimento, and sweet peppers are already bearing. Two steel drums, cut in half horizontally and laid end to end, have every seasoning you could want. I’m talking thyme, Spanish thyme, rosemary, chive, sweet basil, marjoram, coriander, flat leaf parsley, curly leaf parsley. The chadon beni need a haircut before it takes over."  (Chetan, Kindle Locations 747-750).

Almost an entire chapter narrated by Betty is dedicated to the local fish called cascadoux. Of course I had never heard of it; I found this definition: "an oddball member of the catfish family," with quite a bit of other information about the fish, which is local to Trinidad (source).

Betty buys her cascadoux from a fish vendor, who held it back for her. It's so desirable that another customer instantly offers to pay her double for it! Before starting to cook, she sends her son Solo out to gather herbs from the garden. I'm including quite a bit of her description of how she cooks, because I find it so interesting and also so characteristic of how the novel works:


"It’s been donkey years since I tasted cascadoux. Must be since early marriage. If Sunil saw lines of these mud-covered fish selling by the roadside near Caroni he would buy and bring home. Of course then I had to clean everything myself but as it was so fresh it would eat nice nice. I done know Solo will turn up his nose. Have mercy, this fish seriously ugly for days. If I didn’t know how sweet it does taste I wouldn’t want to eat it either. Only thing is you can’t cook cascadoux now for now. It requires preparation." (Betty, Kindle Locations 883-887).

"Into the blender I threw the chadon beni, chives, thyme, an onion cut up, and two cloves of garlic. That mix perfumed the whole kitchen. Two chopped-up tomatoes went in the mix. These tomatoes are down to Mr. Chetan. He didn’t take to gardening at first. But he planted them out, checked on them every evening after work, and now we’re eating the sweetest tomatoes grown from seed. I’m not boasting but fact is fact. Tomatoes in the market can’t touch these for flavor. Inside each fish I stuffed the green seasoning and tomato mixture. That will sit in the fridge until it’s time to curry them down in the pot. When cascadoux’s starring nothing must upstage it. Boiled rice to soak up the curry, a little fried plantain on the side, and we good to go. Mr. Chetan will never say no to a piece of fried plantain. I peeled two, cut them in half, and sliced them. Not too thick and not too thin. It must fry without burning." (Betty, Kindle Locations 908-914).

"In my favorite iron pot, I fried a chopped onion, two-three cloves of minced garlic, and two tablespoons each of curry powder, turmeric, geera, and garam masala. I also threw in a handful of curry leaves, a nice hot pepper, and two pimento peppers sliced up thin thin. Once that began sticking I poured enough water to mix everything. I love that moment when the water hits the pot. It does be like a curry bomb exploding. I wouldn’t be surprised if the neighbor’s house is smelling of curry too. Now for the cascadoux. My ma called this chunkaying the fish— mixing so it’s covered with the curry. I must teach Solo that word or my generation will be the last to know. Fish is a thing that does cook now for now so I watched the pot carefully. Eight minutes later I poured a can of coconut milk and threw in some fresh, boiled pigeon peas. The spicy aroma must have been why Mr. Chetan reached back in my way." (Betty, Kindle Locations 934-940).

Later in the book, Betty tells about a dish called Oil Down, which she discusses with Chetan:


"I do a decent Oil Down if I may say so myself.

—Okay this Oil Down has a slightly different color from mine and it has a richer taste. How you do that?

—If I tell you my secret I go have to kill you dead. He smiled. That was more like my darling doux-doux Mr. Chetan.

—I cook the breadfruit with the dasheen spinach and plenty pigtail but I put in two things you mightn’t use. When I’m throwing in the seasonings and the coconut milk, I add a Maggi cube. Yes, a simple little Maggi cube. Then, five minutes before it’s ready, I stir in a tablespoon of Golden Ray margarine for color and flavor.

I left the curry mango for last. It can only be eaten with your hand. We have knife-and-fork Indians who don’t use their hand but them ain’t my friend. I chewed and sucked the sweet, spicy flesh until it was dry." (Betty, Kindle Locations 3027-3034).


Solo in New York has a lot of adjusting to do as he moves into his uncle's home and adapts to being an illegal resident in a huge city. Here's a little bit:


"Up here they real love their pasta. Three-four times a week I will eat something like lasagna, ravioli, or spaghetti. I texted Mr. Chetan pictures of all the pasta I have been eating and he said at this rate I will turn Italian soon.

These and many other food descriptions were a wonderful way for the author to highlight the character and the ethnicity of Betty, Chetan, and Solo. I can't resist also mentioning that they noticed the birdlife on the island, which is one of the reasons why I really want to visit Trinidad. From Chetan, who was searching for tree branches in a forest because he needed them in order to participate in a voodoo ceremony:


"I heard the great kiskadees before I saw their beautiful yellow feathers in between a mahogany tree. Further, near the pond, was a cashew tree where a blue-gray tanager was nesting. Real pretty. ... As I walked towards the exit— boom— a tropical kingbird showed me a guava tree and my lucky seventh branch." (Chetan, Kindle Locations 2853-2858).


A review of this novel by Sara Collins in the Guardian was titled "Love After Love by Ingrid Persaud – flashes of pure truth" (April 8, 2020). If you want to read a real review, I suggest looking at this! Collins captured what I find most wonderful in the book: "Persaud has a knack for finding the sublime in the ordinary: in her hands the quotidian details of even apparently 'small' lives lead to flashes of pure truth."

Sounds like an interesting read Mae. Nice that there is some food sections!

We ate callaloo soup on a trip to the Caribbean (not the countries in the book here). It was like spinach soup, but creamier. But I won’t ever forget a fellow traveler who said “it has an earthy taste... you know, like eating dirt.” (She was just talking to us , not inside the restaurant. I have to admit to laughing, even though it was sort of mean-spirited.). I remember lots of interesting fruits and veggies and remember learning that there are many many varieties of starchy vegetables besides potatoes. .... it was all too long ago ...I wish we could travel again!

I love your book reviews so thank you for sharing this one with us. I learnt a few new terms for foods I've never heard of. Hope you get to visit Trinidad one day soon.

Another read to put in my queue....I will have to live to a hundred just to read all the books that are waiting for me.