100 Years of Votes for Women

"Congress shall have power to enforce this article by appropriate legislation." 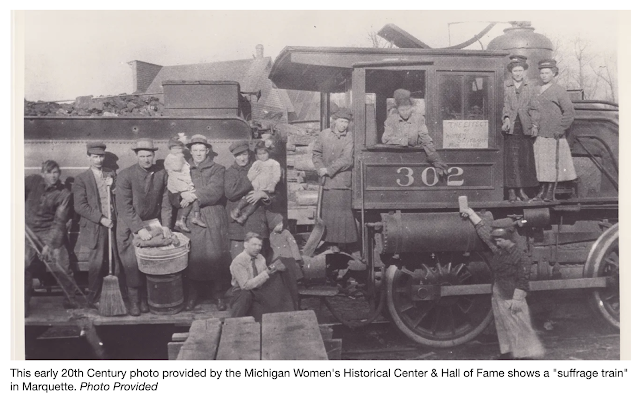 Today marks the 100th anniversary of the Women's Suffrage amendment to the US Constitution, which provided all women citizens with voting rights. A number of individual states had already granted women's voting rights, beginning in Wyoming in 1869: here in Michigan, women had voted since 1918. The campaign for women's rights had been long and active -- as illustrated by the photo above from the Lansing State Journal.

Even after the passage of the 19th amendment, women of color were explicitly denied the vote by a variety of discriminatory means, and the struggle for votes for everyone continues. In the election this November, no citizen of the US can take his or her voting rights for granted: we still must fight to ensure that every citizen can vote and that each person's vote will be counted. However, today, 100 years after the amendment became part of the Constitution, is a good day to look back on the struggles of the past to achieve the victories that made us what we are now. For a detailed history in pictures, see "Suffrage at 100" in today's New York Times. (Note: this article is behind a paywall, but you can see it if you have no NYT cookies in your browser.)

It's great that you mentioned this today because this year we need to vote like our lives depend on it. Oh wait, THEY DO! Thanks for this powerful message and amazing photo. I had NO idea some states allowed women voting earlier than 1920. I'm off to check out the NYT article. I have NO cookies (grin).

I heard a good interview on NPR today about the African-American women vote. Good to bring this to the forefront. We all need to vote. I love the photo.

Free choice voting has always been a privilege to me. Parts of my family in the DDR was not so fortunate.

I certainly hope your elections take place this year!

Voting has had such a weird history in this country. And the way we vote is so archaic. No reason why all of us aren't voting by mail (or electronically) all the time. Good post -- thanks.

Good post! I love, NOT, the people who complain about who is in office, but yet don't take the time to vote. No way should we be able to vote by mail, only absentees.
And Trump pardoned Susan B. Anthony on this day!!!

Mae, have you seen this? Professor Tries Out Recipes That Are Nearly 4000 Years Old

Today is the one day a year I can be proud I'm from Tennessee. In these days of rampant voter suppression, the fight continues.

@Iris — I’ve read one of the several books about that collection of stone tablets with (probably) the oldest recipes. Quite an interesting endeavor, to try to translate them into food in a modern kitchen!