Maybe you have the impression that I'm a purist when it comes to food. I do love fresh local produce, and I've reduced the amount of meat in my diet. However, I also love chocolate. And I have a special weakness for (of all things) marshmallows. I like them toasted, but I'm fine with eating them right out of the bag. And I do.

My original association with marshmallows is the Campfire brand, which used to come in a little box with two layers of marshmallows, as shown in the vintage ad. I'm pretty sure we had a box of them like that on a cookout when I was a Brownie Scout. I think that was my introduction to s'mores, in fact. In winter, with s'mores out of season, we often put one or two of them in a cup of cocoa, as shown in the picture.
I've written about marshmallows before; maybe I'm repeating myself. Sorry! I'm sure I've mentioned how I like them, and I went over the history of this interesting confection in an earlier blog post. Maybe I described how my sister and I once made a batch of marshmallows from scratch, but the result, after a lot of work, was about the same as the commercial ones. Right now, though, I'm just thinking about how I really like to eat them. Maybe toasted.
Here's a photo from the time we tried toasting marshmallows with the kitchen torch. 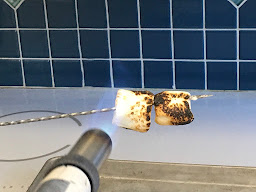 Marshmallow is not really my thing, but Kathy's Bear toasting marshmallows looks so adorable!

I thought the marshmallows we made were better than store-bought, but the powdered sugar all over your kitchen plus your understandable fear that the sugar syrup would ruin your flat-top stove made the process a bit tense.
There are flowers blooming now near the river that I think are called marsh-mallows. Apparently their root was once used in marshmallows.

I enjoy them best toasted on a fire :) just like that bear. I have a recipe for fudge around here somewhere that uses marshmallows.

I remember toasted marshmallows (and S'mores) from my childhood. That's probably around 70 years ago.

An occasional marshmallow is good, but I'm not all that crazy about them. But with all they sell I knew there had to be people who love them!

My first memory of marshmallows is a mug of hot chocolate topped with them. My aunt made that for us after we had been out skating on the pond when I stayed with them in New Jersey. I still enjoy that treat today and always have a bag in the treat drawer.

A couple of months I bought some gourmet marshmallows. I bought a mixed packet of flavours and they were so delicious.

I have made marshmallow, so I need to figure out how to make them neatly.

Campfire marshmallows1 I remember those. I don't remember my first marshmallow -- probably a campfire smore at the lake or maybe in hot cocoa. I always buy the minis for cocoa in the winter and I think I put more marshmallows in the cup than cocoa!