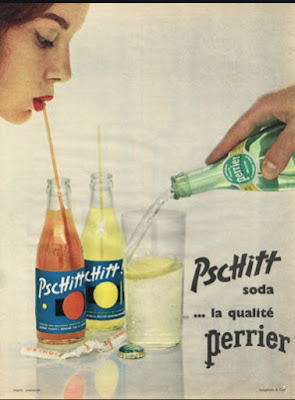 A long time ago in France, the Perrier company invented a lemon drink named for the sound of the carbonated water fizzing when you opened the bottle. The sound... Pschitt !

Pschitt Citron was a really delicious and refreshing beverage, which I liked very much. The bottles were tiny, but so were the other carbonated beverages you could enjoy in a French café on a hot day. Both flavors, my favorite Pschitt citron (lemon) and Pschitt orange, were far less sweet than American carbonated drinks.

The advertising campaigns for all the Perrier beverages were beautiful and imaginative, and are still widely admired for their innovative graphics. I've looked around the web for examples of the most entertaining of these ads – here's a selection, beginning with the ads from the 1950s. 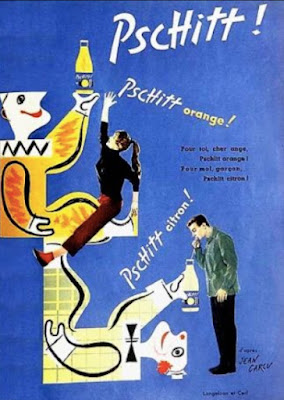 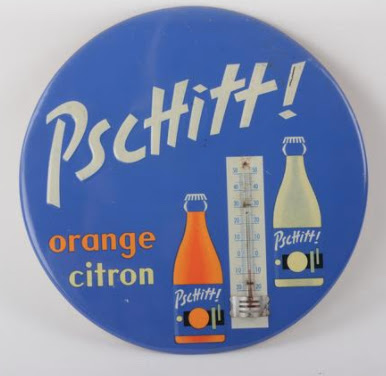 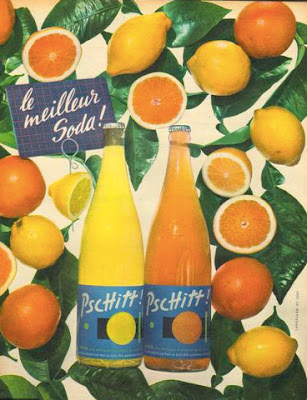 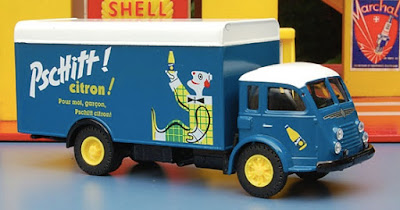 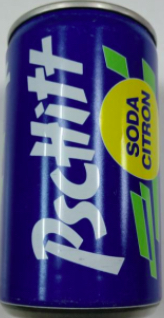 The Perrier company sold the Pschitt citron and Pschitt orange brands around 20 years ago, and as far as I can tell, Pschitt sodas are no longer widely sold, if at all. For some reason 😀   Pschitt products were never marketed in the US.

I hope you find this an amusing break from all the highly serious things that I write about. We need some light entertainment, don’t we? I'll be sharing this post with the weekly celebration of beverages at Altered Book Lover, as hosted by Elizabeth and Bluebeard.


Blog post © 2020 by mae sander for mae food dot blog dot com.
Images from advertising are from the web.
Posted by Mae Travels at 6:26 AM

I loved seeing these gorgeous colourful vintage posters Mae, so cheery and fun. I bet you will find many a Perrier poster framed and hanging in homes 💜

You always seem to find the most unusual and entertaining posts for T Tuesday. I enjoyed reading about the Perrier drink I'd never heard of before. I wonder if it wasn't marketed in the states because of the name. It's sounds a bit like "poop" to me.

Goodness, I really LOVE the many posters and ads you found from around the world. There are some pretty clever graphic artists in this world. Thanks for sharing Pschitt lemon and orange drinks, their history, and the graphic drawings with us for T this week, dear Mae. It's a great way to celebrate T day.

Such bright and attractive ads! I favor the Crush drinks - https://www.crushsoda.com/ - in orange and grape of those available here. They are quite sweet, though.

@Bluebeard and Elizabeth -- of course the name sounds like a potty-mouth kid's favorite word! We always thought it was hysterical to order it in a café. Maybe we would have ordered it even if it hadn't been so good. That's what I meant by the funny emoticon.

Well, loving lemon the way I do, I know I would be a big fan! Pity it is no longer made. Love the graphics on the post. They're wonderful.

I seem to recall something similar in French shops, but can't think of the name. I buy the Italian version usually. I'm hoping that the teams can all finish the race but already two members have tested positive.

It's interesting to see how the ads evolved over time. I didn't know that Perrier made anything but bottled water.

I love this post. Great info and wonderful advertising art. Be safe.

This drink sounds delicious and refreshing. My favorite was the vintage posters. I would love to have a set of those for my wall. Very interesting post.
Happy Tea Day,
Kate

I enjoyed your post-perrier was always one of my favorites of the carbonated waters. Happy T Kathy

I remember those ads from visits to France in my youth, always made us laugh. Happy T Day, Valerie

"Pschitt" - how funny. In Northern Germany you say "Pieschern" for going for a pee, well, I see a connection!
Yes. I thank you for a light note - happy P... T-day!

Love the vintage graphics and a good lemon fizzy drink in the summer ~ Enjoy!

I can't say I've seen it lately, but I remember my boys getting the giggles on seeing it on shelves when we used to holiday in France in the 80's! Love all th different ads! Happy T Day, Chrisx

Thank you for sharing those beautiful vintage posters. The art is stunning.
I don't remember the drink as we didn't go to France when I was young. The name makes me smile. Why didn't the call it Pssst if they wanted to emulate the fizz sound.
I do believe what you say, that soft drinks were much less sweet years ago. Even so called 'natural' lemonade nowadays has heaps of sugar in it.
Happy T-Day,
Lisca

Fun post and posters. I can see why the name didn't catch on in the US. I'm still laughing. Happy T DAy

As young children in the late 1950's and 1960's, we used to go through France on our summer holidays on the way to Spain, Italy, Portugal etc.
As soon as we entered France, as well as seeing gorgeous dilapidated Citroen cars and vans everywhere, Pschit was advertised on posters and on the side of Paris buses......and as children, we loved it!
Very happy times, lovely memories.