“High on the Hog” by Jessica Harris 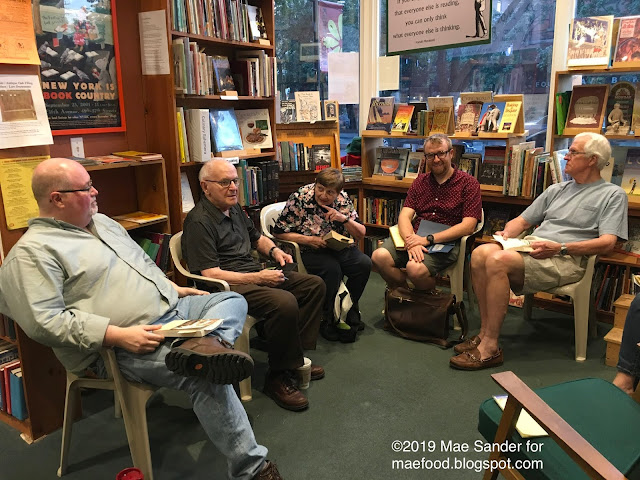 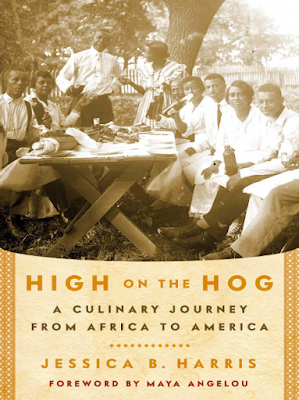 Our culinary reading group, sponsored by Motte and Bailey bookshop, met last night to discuss High on the Hog: A Culinary Journey from Africa to America by Jessica Harris (published 2011). In the photo above, you can see the bookstore setting where we meet. Gene Alloway, owner of Motte and Bailey, is at left. I thought I had included everyone, but unfortunately cut off one participant at far right.

Each of us who read the book liked it very much. Several participants praised the consistent and useful organization and the author's skillful writing. The ten chapters are in chronological order, and each chapter has three parts: a historical/sociological description of Black Americans during the selected era, a description of the foods and foodways that characterized the era, and information about restaurants at the time.

I also liked the many illustrations, the detailed descriptions of foods, and  the way Harris used quotes from many authors, like this one:


"In Harlem, as in other northern communities around the country, the newly arrived had to survive on what African American writer Ralph Ellison called 'shit, grit, and mother wit.'" (p. 174).

In the chapters on the era of slavery, we were all quite fascinated to learn about the lives of the slaves who worked in the kitchens of the "Big House." We wondered about those who escaped in one way or another, and often became proprietors of restaurants, catering establishments, or food carts in the North. So many new ideas. For example, we were all quite fascinated by the information about Black cowboys and about the responsible role of Blacks as cooks on the cowboy chuck wagons out West.

In previous book selections, we had learned about Hercules, the enslaved cook of George Washington, and about James Hemings, the mixed-race cook who worked for Thomas Jefferson. (Hemings was the half-brother of Jefferson's wife, and brother of Sally Hemings, Jefferson's mistress: the heartlessness of Jefferson's treatment of these enslaved relatives never ceases to amaze us all!) Their stories, and many others, really capture something about the deeply troublesome and immoral aspects of slavery. Here's a very interesting passage about the escape of Hercules (also called Harkless) --


"His escape troubled the Washington family. 'The running off of my cook has been a most inconvenient thing to this family,' wrote Washington, who spared no expense in attempting to find him. No doubt finding it difficult to understand why one such favored slave would leave, Washington charged Frederick Kitt, his former house hold steward in Philadelphia, with finding Hercules and returning his property to him, noting, 'but little doubt remains in my mind of his having gone to Philadelphia, and may yet be found there, if proper measures were employed to discover (unsuspectedly so as not to alarm him) where his haunts are.' Several weeks later, Washington renewed his request to Kitt, stating that any expenses incurred in finding Hercules and returning him to Mount Vernon would be paid by Colonel Clement Biddle, but it was to no avail. Hercules had slipped off into the night. His six-year-old daughter, who remained enslaved at Mount Vernon, expressed thoughts that were probably more representative of those of Uncle Harkless himself. When asked by a guest at Mount Vernon if she were upset to never see her father again, she replied, 'O! sir, I am very glad, because he is free now.' Despite our lack of knowledge of him or his dishes, Hercules, the chef who doesn’t even have a last name for history, was more than a grace note to the history of African American chefs. He was the first black chef for the country’s first chief executive." (p. 76).

Our discussion turned to one interesting twentieth-century phenomenon: the rise of Elijah Muhammad and the Black Muslims or Nation of Islam (NOI). We were interested in the way that the Black Muslims challenged traditional foodways of the American Black community. The following passage illustrates what Harris had to say:


"Pork is haram, or forbidden, to traditional Muslims. Pork, especially the less-noble parts, was also the primary meat fed to enslaved African Americans. Pork in any form was anathema to NOI members, as were collard greens or black-eyed peas seasoned with swine. The refusal of the traditional African American diet of pig and corn was an indictment of its deleterious effects on African American health, but also a backhanded acknowledgment of the cultural resonance that it held for most blacks, albeit one rooted in slavery. Pork had become so emblematic of African American food that the forbidding of it by the Nation of Islam was radical, and the refusal to eat swine immediately differentiated members of the group from many other African Americans as much as the sober dress and bow ties of the men and the hijab-like attire of the women. Forbidding pork made a powerful political statement, but the real culinary hallmark of the Nation was the bean pie— a sweet pie, prepared from the small navy beans that Elijah Muhammad decreed digestible. It was hawked by the dark-suited, bow-tie-wearing followers of the religion along with copies of the Nation’s newspaper, Muhammad Speaks, spreading the Nation’s gospel in both an intellectual and a gustatory manner." (pp. 210-211).

A recipe for this counter-cultural bean pie, along with many more traditional recipes, appears in the recipe section at the end of High on the Hog. A very interesting and enjoyable book!

Well, I did see the legs of the participant at the far right, so you didn't miss it :-)) It sounds like an interesting read for foodies.

Isn't it fun to have a target specific group that is focusing on the same topic you all love and the books that come with it? You read the most interesting things!

What an interesting book! thanks for the insightful review.

It's nice to get together with a group like this, reading and discussing. I have seen this book but haven't checked it out yet, as I'm on a non fiction streak lately I will have to see if the library has a copy.

Sounds like a fascinating book - and how cool to belong to a culinary reading group. :)