"Cuisine is indeed a language, a tongue with the richest possibilities. It's full of epithets and metaphors, hyperbole and litotes, metonymy and synecdoche. It's not for nothing the poet Pushkin earned his place in the memory of generations as the author of the 'Pushkin-style potatoes' recipe, famed in Russian pubs..." (Russian Cuisine in Exile, p. 94)

Around thirty years ago, two Russian immigrants to New York published a book in Russian, titled Russian Cuisine in Exile. Through the years the book has been through many editions, published in many countries where Russians lived in exile.

Pyotr Vail and Alexander Genis seemed to be writing a book about food with many many references to the classics of Russian literature, political thought, art, and culture. These references were well-known to Russians, but not surprisingly, they are unfamiliar to even reasonably educated Americans who aren't Russian specialists. It's really a book with a very specific audience with a lot of specific references for the initiated. For example: Do Americans read Pushkin? Do Russian exiles keep reading Pushkin? According to the authors: "The émigré might switch out The Captain's Daughter [by Pushkin] for The Joy of Sex but no hot dog will ever replace a garlic sausage in his heart." (p. 93).

I think Vail and Genis (or V&G as they are called in the book) were really writing a philosophy book. The subject: what it was like to be a highly educated Russian in exile, having gone from extreme scarcity to extreme abundance when it comes to food, but maybe not in other areas of life. Many Russian immigrant writers clearly have read and absorbed V&G's messages. In his book Savage Feast, Boris Fishman's reference to it inspired me to buy it. I am sure Mastering the Art of Soviet Cooking: A Memoir of Food and Longing by Anya Von Bremzen also was influenced by it.


For us, the American reading public, Russian Cuisine in Exile didn't exist until a translation was published last year by several young American students of the Russian language. They created a beautifully designed edition, shown above, with lots of footnotes so that we outsiders can understand what Russian identity, especially their culinary identity, is really about. This book includes lots of images so we can visualize the food that seems to be under discussion. While almost every chapter does offer some sort of a recipe, it's all about much more than food. It's very funny, too, in places. A book with a limited audience has thus become accessible to a larger audience, maybe even including Americanized children of the original consumers of the book. Great work!

Rather than try to explain why this book isn't precisely about food when it's really about nothing but food, I'm going to offer a series of quotations to show you what I mean:


"You can argue about culture, ethnicity, and history until morning, but can there really be any controversy about dried fish?" (p. xi)

"Brewing tea is surprisingly simple. The only thing needed here is precision. Generally speaking, cooking is unlike any other art: diligence is more important than talent." (p. 4)

"Good cooking is a war between order and the amorphous nature of life. When you stand at the stove with a spoon in your hand (a wooden one, of course!), be warned by the thought that you are a soldier in the struggle with world anarchy. The kitchen, in that sense, is the front line." (p. 21)

"Mushrooms -- like some of our acquaintances -- occupy a middle-ground between plants and animals. Scholars still haven't decided if they have a soul." (p. 37)

"Yes, Russia is considered to be a backward, savage country.... But for the love of God, what does this have to do with Russian cuisine? Mao Tsetung was no Jesus Christ either, but does the reputation of Chinese cuisine suffer due to the Cultural Revolution? Did the world turn its back on sausage and Bavarian beer because of the crimes of the Third Reich?" (p. 45)

"If, according to Heraclitus, you never step in the same river twice, then it's even more impossible to make the same borscht twice.... Even a basic fried egg will melt from tenderness if you are making if for your beloved for breakfast. And that very same fried egg will turn into a dry crust if you're cooking it for a relative who's overstayed his welcome." (p. 93)

And a few examples of the very attractive layout of the book: 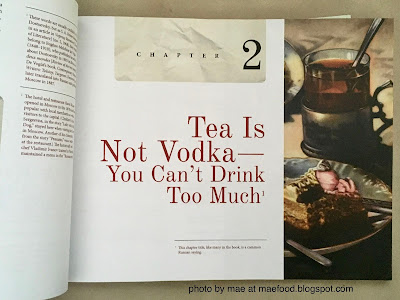 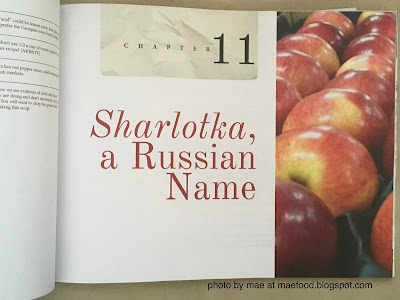 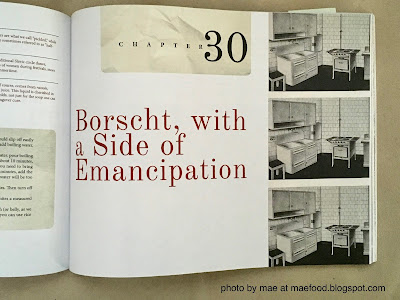 Of course I have an obligation to include a quote that mentions Mona Lisa:

"Nothing is worse than American bread. The difference between the two superpowers becomes clearest of all in how they relate to this food. we loved it. Wise Soviet political bureaucrats pronounced: 'Bread is the head of it all,' as they bought American grain. Americans were happy to share, because here bread is despised....

"The Russian (please note) scientist Timiryazev said that a hunk of good baked bread is the greatest accomplishment of the human intellect. That's what we're talking about. Not the airplane, not the Mona Lisa, but a plain loaf of bread." (p. 105)

My grandfather escaped Russia during the revolution, so I grew up with lots of Russian food in exile.

This sounds very intriguing. And I have to share this quote with Rick: "The Russian (please note) scientist Timiryazev said that a hunk of good baked bread is the greatest accomplishment of the human intellect. "

I love "cookbooks" like this. For many years I've learn a lot about other cultures through there food. I know close to nothing about Russian culture so I appreciate your introducing us to this cookbook.