"Panic in a Suitcase" by Yelena Akhtiorskaya 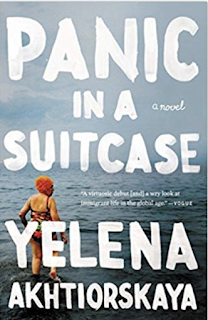 "They met in Brighton, a neighborhood whose pulse Lamborg made a point to check at least once a year. Pasha professed ignorance, and it was Lamborg who ended up showing Pasha around leading the way to a restaurant-café that served the most delicate blintzes. A rheumatic finger pointed out that over there was the most sinus-excavating plov and here the airiest meringue, while two blocks up stood white vats of the crunchiest pickles. The only men Pasha knew with such an investment in the matter were grotesquely obese -- they ate all day long, did little else -- yet even they were less expert in the field. And here was Lamborg, a chopstick of a man, warning Pasha never to buy Korean carrot salad from Gold Label but only from Taste of Russia, which, on the other hand, used the worst dough for its frozen pelmeni. All in earnestness, not a hint of sarcasm, not a measly grin. ... The only gastronomic wisdom Pasha could muster was that it was truly uncanny how much the food here was like that in Odessa, the only divergence being in abundance. He kept at it until he'd talked himself into admitting how disturbing and pathetic he found Brighton, though he actually didn't feel one way or the other." (Panic in a Suitcase, p. 140-141)

Here's another book about Russian immigrants from the Soviet Union and its aftermath, about their typical complicated and agonized self-examinations, self-doubts, ambivalent feelings towards their own and their adopted countries, and their elaborate family dysfunctions. The novel also deals with Russians' love of poetry and poets and not least of all their complicated digestion and food ways. As do the other novels of these immigrants, this one reflects the tension of people whose expectations of a new land are almost -- but not quite -- fulfilled. They always know about another Russian who is living in a mansion with gold-plated everything instead of a cramped apartment in dumpy Brighton Beach, and when they write home sometimes they even claim that they've achieved this ideal.

The character Pasha -- himself a poet -- and his niece Frida are the main focus of the book, but Pasha's parents, his sister and her husband (Frida's parents), his wives and son, and a few miscellaneous friends all have a role. Pasha is a visitor to Brighton Beach, not an immigrant: he never decides to leave Odessa, and he continues to worship Russian poets, especially the exiled Brodsky. Frida is the opposite: she was such a small child when she left that she hardly remembers Odessa, and it's all new to her when she finally visits. What she finds, not surprisingly, is that the family there is just as mixed up, conflicted, quarrelsome, and dysfunctional as the Americans: maybe even more so.

The tone of this novel is half ironic, half satiric, and half bitter (the halves overlap). The food the characters eat reflects these attitudes, which makes the book somewhat different from other Russian immigrant books where food can be an un-ironic pleasure. For example, they go to a seafood restaurant near an unsatisfactory cottage disappointingly not very near to a vacation lake for a meal that later sickens all of them:


"They all intentionally pointed to different items on the menu but got identical cramy shellfish dishes on giant plates too heavy to take part in their habitual plate-swapping ritual so they just threw white globs of mysterious seafood at each other, finding that their dishes didn't only look the same but tasted the same, too." (p. 77)

Stereotypes go both ways: when Frida lands in Odessa for her first return home since early childhood, and is picked up at the airport:


"A bottle of Coca-Cola awaited in the trunk of Volk's burgundy Volvo. It was practically steaming. From a vest pocket, Volk retrieved a stack of Dixie cups. Sveta Russian-dolled [sic] out the cups on the sun-blazed hood of the car, pouring until the brim caught the froth. They toasted in the parking lot. It was a superb parking lot. There was no painted grid delineating individual spaces, and the cars were strewn about as if abandoned by a giant child called to tea. Frida squinted into the distance, gulping her strange drink. It was a syrup made from the fur of an old grizzly, cooked up in a cauldron on the outskirts of town by a lady who mixed cat food into everything she touched ... " (p. 226-227)

I can't say I found this book as amusing or captivating or even as coherent as I've found several other Russian immigrant novels and other books about the most recent wave of new Americans. In fact, it was at times a bit tedious and unfocused and as in the above passage, overwritten. I prefer the work of Gary Shteyngart, Anya Ulinich, Anya Von Bremzen, or Boris Fishman to that of Akhtiorskaya.

Hmmm, so many yummy food-words, I´m hungry now (not longing for getting obese, though!).
We have a lot of Russians here, too, and their food. And all my last three teamleaders came from GDR, speaking Russian, one sang the alphabet for me.

Not amusing, captivating or coherent kind of tells me I shouldn't be adding it to the list right now!

Hmmm, so many yummy food-words, I´m hungry now (not longing for getting obese, though!).
We have a lot of Russians here, too,

While the food mentioned sounds interesting your description of the book as tedious will keep me from seeking it out.

Interesting but maybe not for me at this time. Cheers from Carole's Chatter

Bummer that it wasn't better

I have to admit that I have not read any novels about Russian immigrants. This does not sound like the book to be my first! Half the year I live in Sunny Isles, Florida which has a significant Russian community. I do enjoy shopping in their local food markets and observing their culture and language.I find it all very different and interesting.