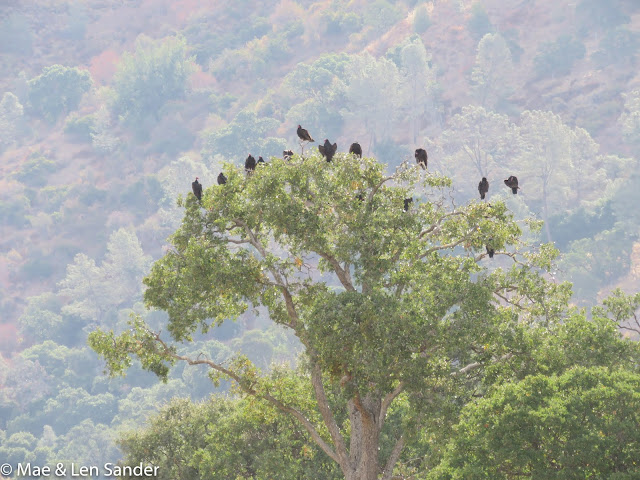 Today we drove across the San Mateo Bridge and continued eastward, stopping in several parks and at birding sites along the road. At Del Valle Regional Park, the colors of the hills and the early fall vegetation were very beautiful. We watched a number of vultures taking off from their roosts and circling as they began their day. Two golden eagles were also perched on trees at the peaks of the hills, and took off as we watched them.

We drove through the Central Valley to reach the foothills near Yosemite National Park. We're not going there though; it's too crowded.
Posted by Mae Travels at 12:30 AM

SO beautiful! I love esp. the first one...as beautiful as a postcard! Continue to enjoy your vacation, Mae.

Such a different countryside from here. It's beautiful.

I hope you're enjoying your time in Northern California. Too bad that you're not going to Yosemite, it's my very favorite place, but I certainly prefer it in fall or even better winter, when it is not crowded at all.

I too love the first photo. Colors are so pretty.
I wish we had fall colors here. :)