"The Forty Rules of Love" by Elif Shafak 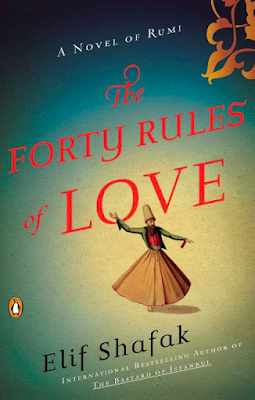 Elif Shafak is a wonderful and imaginative author, but I think that she over-reached in her book The Forty Rules of Love: A Novel of Rumi (published 2010). Sometimes the book seems vivid and wonderful, sometimes not so much. No matter what else I think, I admire it for its scholarship about 13th century mystics and the history of Islamic thought and poetry, although I also admire the skill with which the author modernizes the 13th century characters and scenes.

Often as I read, I felt that the novel was far too didactic. Embedded in a story of a 20th century American family is another novel about the 13th century, which Ella, the main character, is reading. There are indeed 40 quotations about love, which are used as little moral or emotional lessons applied to the main characters in both the time frames covered by the novel. Sometimes they fit in well, but often the moralizing seemed forced.

The character Ella was extremely stereotyped: a frustrated Jewish housewife in Massachusetts whose dentist husband has come to totally bore her and whose children are outgrowing her smothering maternal attentions. Her hobby is cooking, and even the meals she prepares seem to me to be quite stereotyped like "honey-roasted duck with sautéed potatoes and caramelized onions on a bed of brown rice" with "white chocolate crème brûlée" for dessert. (p. 346-347)

As Ella reads the embedded novel of 13th century Turkey, she slowly falls in love with its author. After much drama, she abandons her family with pretty predictable consequences. Or as we learn at the beginning of the book: her life had been undistinguished and calm and normal -- "All of which is why no one, including Ella, could explain what was going on when she filed for divorce in the fall of 2008 after twenty years of marriage." (pp. 7-8).

The characters in the 13th century story, which mainly takes place in Konya, Anatolia (modern Turkey) were stereotyped as well. The central characters are two mystics, the famous poet Rumi and the wandering dervish Shams, who are based on historic figures. Shams, destined to form a deep friendship with Rumi, begins with a vision of his own death as he wanders towards Rumi. During one of his adventures, before they met, he presented this list of typical people:


"I roamed the streets, amazed at the mixture of religions, customs, and languages permeating the air. I ran into Gypsy musicians, Arab travelers, Christian pilgrims, Jewish merchants, Buddhist priests, Frankish troubadours, Persian artists, Chinese acrobats, Indian snake charmers, Zoroastrian magicians, and Greek philosophers. In the slave market, I saw concubines with skin white as milk and hefty, dark eunuchs who had seen such atrocities that they had lost their ability to speak. In the bazaar I came across traveling barbers with bloodletting devices, fortune-tellers with crystal balls, and magicians who swallowed fire. There were pilgrims on their way to Jerusalem and vagrants who I suspected were runaway soldiers from the last Crusades. I heard people speak Venetian, Frankish, Saxon, Greek, Persian, Turkish, Kurdish, Armenian, Hebrew, and several other dialects I couldn’t even distinguish. Despite their seemingly endless differences, all of these people gave off a similar air of incompleteness, of the works in progress that they were... " (p. 132)

Even the food Shams eats seems a bit stereotyped to me. From a different part of his narrative:


"Two serving boys appeared just then, carrying between them a huge tray stacked with plates: freshly grilled goat, dried salted fish, spiced mutton, wheat cakes, chickpeas with meatballs, and lentil soup with sheep’s-tail fat. They went around the hall distributing them, filling the air with the scents of onion, garlic, and spices. When they stopped by my end of the table, I got myself a bowl of steaming soup and some dark bread." (p. 38).

While the 20th century narrative is written by an omniscient narrator, the 13th century embedded novel is told through the voices of many individuals -- or types! Besides Rumi and Shams, we meet an abused harlot, the hermaphrodite who owns the brothel, a self-righteous teacher in a madrassa, a self-justifying brute who beats up those he deems heretics, a drunkard, a formerly Christian wife (Rumi's), a mystically gifted young girl (Rumi's adopted child), Rumi's good son and his bad son, inhabitants of various dervish academies, and more.

In the case of all these characters, Shafak does a remarkable job of portraying them and adding just enough detail to the types. I would have expected to be confused by so many narrators, but the writing is very clear. For this reason I kept reading and my attention didn't waver, even though the didactic effects bothered me. I felt as if there was a tension between the emotionally clear way the characters came through and the forced use of the 40 quotes and the generalizations about love in their lives.

The main sections of the novel are titled Earth, Water, Wind, Fire, and The Void. I am trying to find the significance of these traditional categories to the contents of the novel, but I am not sure how to interpret it. Perhaps I'm just not able to understand the overarching significance of this complex novel. Perhaps it's necessary to know more about the history -- I knew almost nothing.

I'll end with this quote from a review of the novel by Michelle Goldberg:


"The Forty Rules of Love is a terribly frustrating novel, because almost everything about it is wonderful except for the work itself. Its author, Elif Shafak, is an inspiration: As Turkey’s bestselling female writer, she is a brave champion of cosmopolitanism, a sophisticated feminist, and an ambitious novelist who infuses her magical-realist fiction with big, important ideas." ("Lost in Translation," The New Republic, March 25, 2010)

Note: if you need information on the historic background, I recommend this article: "10 Things You Probably Didn't Know about Rumi."

Not sure this is my kind of read, but I definitely want to try that lentil soup with sheep’s-tail fat LOL!

I've not read any of her previous work but I'm not sure on this one. Still, sounds like she can write a good food description!

I love the first line of the quote by Michelle Goldberg - it makes me interested in reading it! :--)