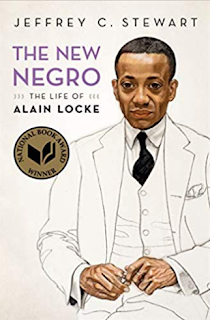 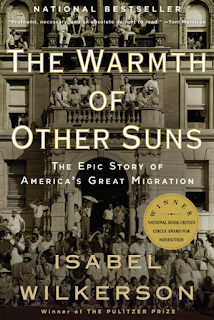 The New Negro: The Life of Alain Locke by Jeffrey C. Stewart and The Warmth of Other Suns: The Epic Story of America's Great Migration by Isabel Wilkerson have been my recent reading. Both books are very long, very dense, and very thought-provoking. I have not finished The Warmth of Other Suns, and I find it emotionally challenging to learn details of the depths of mistreatment, bigotry, and abuse that was the horror show of southern treatment of black people from the era after the Civil War until well into the twentieth century. The biography of Alain Locke was a fascinating companion to this book, because it showed one way that Black Americans were able to overcome the evils of white supremacy of that era.

Alain Locke (1885-1954) was a highly accomplished scholar and public intellectual who is very little known. This prize-winning book has probably introduced Locke to many other people besides me. Unfortunately it's extremely long -- I found it excessively long, though mainly fascinating.

One of the most amazing things about Locke is that he was incredibly flexible in his intellectual life, and was a leader in several areas of scholarship about Blacks in America and in creative support of several forms of emerging Black American culture. He wrote, among other things about the effects of the Great Migration, which began around the time of his birth, and continued throughout much of his life.

As a young man, prior to World War I, Locke attended Harvard and then was the first Black recipient of a Rhodes scholarship -- and it's interesting that he was the last one until around 50 years after his was awarded. Although his British hosts were reasonably welcoming, he had trouble finding a college where he would be accepted. Worse yet, he was very badly treated by the severely racist Southern Rhodes scholars (the scholarship is distributed evenly among the US States). For example, the Southerners forced the Rhodes social organization to exclude him from an invitation to the traditional Rhodes scholars' Thanksgiving dinner.

Despite the bigotry he experienced, Locke assimilated European culture, and came back to the US to finish a doctorate in philosophy at Harvard.  He then became a professor at Howard University in Washington, D.C. Soon after receiving his PhD, Locke became a leader and a creator of the Harlem Renaissance, and subsequently a driving force in other important intellectual and artistic Black cultural creations. The book title, "The New Negro," comes from a concept that Locke invented in the 1920s to encourage poetry, painting, sculpture, and fiction-writing that reflected the Black experience. As a member of a minority group, and also as a mainly closeted gay person, he was alienated from mainstream society in a number of ways. As author Jeffrey Stewart explains it:


"Locke did something remarkable with his alienation. He decided to use art, the beautiful and the sublime that nurtured his and his friends’ subjectivities in a world of hate, to subjectivize the Negro, to transform the image of the Negro from a poor relation of the American family to that of the premier creator of American culture." (p. 8)

Locke was an encourager and a colleague of a number of still-famous participants in the Harlem Renaissance; among those that are still famous are authors Zora Neal Hurston and Langston Hughes. Two of his collections of works, including his own essays are still in print today, particularly the volume titled The New Negro, published in 1925.

During the 1930s and 1940s, Locke continued to be an innovator in encouraging Black culture. Stewart's book documents this at length, but I'm not going to try to summarize these activities. I would like to share something that I learned from this book, as well as from reading a biography of Paul Robeson (blog post here). These books forced me to think about Black Americans' response to the patriotism and idealism that predominated the nation during World War II. While Blacks were highly patriotic and willing to volunteer to work in the war effort, bigotry against them was rampant. Stewart writes of Roosevelt's famous "Four Freedoms":


"Almost as soon as the president laid out the Four Freedoms— Freedom of speech, Freedom of worship, Freedom from want, and Freedom from fear— for which the war would be fought, African Americans made it known that for them these rights were unattainable in America. A. Philip Randolph, having left the National Negro Congress, proposed in 1941 a march on Washington to demand desegregation of the armed forces, elimination of discrimination in hiring, and equal opportunity for Negroes in federal government contracts as the price of full-throated Black support for the war effort. FDR avoided that embarrassing protest in the nation’s capital by issuing Executive Order 8802 that banned discrimination in the hiring in wartime jobs, the awarding of contracts, and established the toothless but symbolically valuable Federal Employment Practices Commission (FEPC), but the Chicago Defender kept the pressure on by announcing a “Double V” campaign— victory in Europe and victory in America— to tie the loyalty of Negroes in war to an expected transformation of American race relations in peace." (pp. 821-822)

I'm ashamed that I had never thought this deeply about the Four Freedoms, which I've written about before (link). I learned a great deal in reading these two history books, but this is all I have to say right now.
Posted by Mae Travels at 6:00 AM

I need to read more about that. Both of those books look excellent and Locke sounds like an exceptional man.

These both sound very interesting, if heavy reading, Mae. I regret I've never heard of Locke before. He sounds quite remarkable.