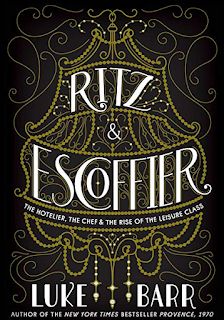 A ritzy affair... puttin' on the ritz... OK it's not the Ritz... the name "Ritz" means luxury: the most extreme and showy type of luxury. The words ritz and ritzy convey an attitude as well as a sense of high living. A very nice word for this Wordy Wednesday!

In the high-living era of the 1890s, César Ritz (1850–1918) created a new concept in luxurious hotel living, and his name became synonymous with this grand style -- inspiring the creation of this word. Ritz's partner, Auguste Escoffier (1846-1935) was responsible for the food at Ritz's most famous hotels: first the Savoy in London, owned by the impresario Richard D'Oyly Carte (1844 -1901); second the Ritz in Paris which he owned; and third, the Carleton Hotel in London. All three hotels provided new thrills for their extremely wealthy and often titled clientele, the high-living international upper classes of the last decade of the 19th century -- the famous or maybe notorious fin de siècle.

Ritz and Escoffier: The Hotelier, the Chef, and the Rise of the Leisure Class by Luke Barr relates the story of the partnership between these two famous and flamboyant historic figures. It describes the frenzied commitment of Ritz to creating new types of amenities in hotels. He designed every detail to create a new type of hotel atmosphere. Some of these innovations we today take for granted, such as elevators, electric lights, a bathroom for every hotel room, and an early form of cooling that involved blocks of ice with electric fans. However the level of personal service in Ritz's hotels would be a bit unusual today -- his novelty was to make it unnecessary for his wealthy clients to bring their own staff of servants!

In London, the Savoy hotel was especially unusual because aristocrats and common-status customers were equally welcome -- provided they could afford the astronomical prices. Previously, the aristocrats socialized at private clubs and in their homes, not in public spaces. At the Savoy, newly-wealthy common people, even including Jews and Americans, dined at tables in the same dining room. Though the Prince of Wales had private rooms in the early days, at the end of the era, even he ate in dining room at the Carleton Hotel. Before Ritz created the new atmosphere at the Savoy, hotel dining rooms did not even serve patrons other than guests in the hotel. Ritz invented a huge number of new luxury concepts.

Barr describes the culinary genius and imagination of Escoffier in bringing French cuisine to England. The chef was constantly inventing new dishes and incredible presentations to please famous people -- dishes that were light and delicious and crammed with very expensive ingredients. Escoffier's patrons included the singer Nellie Melba, for whom he named peach melba; the divine Sarah Bernhardt; the Prince of Wales, a lover of French food, especially that of Escoffier; the pretending French Royal Family that were exiled from France because they might try to get the throne back; American titans of industry like Vanderbilt; and many others.

Celebrities who loved the restaurant and appreciated the food obviously drew more and more customers to the hotel and especially to the restaurant. I especially liked the story of how Escoffier created a special preparation called “Cuisses de Nymphes a l’Aurore” (Nymphs' Thighs at Dawn) — a cold dish with a beautiful sauce, served on a block of ice — which he presented to the Prince of Wales. What was it?  Frog’s legs in a sauce flavored with paprika and tarragon. The Prince’s guests were shocked, but he laughed, ate it, and later ordered it again. It’s not clear if this totally overcame the English prejudice aganst frog legs, but it shows what Escoffier was capable of.

After a number of years, Escoffier, along with Ritz, was fired from his job at the Savoy because he had been taking large "commissions" from suppliers of food to the hotel restaurants that he managed, and had been engaged in other questionable financial deals. The two of them bounced back quickly, and Escoffier not only continued cooking in Ritz's new unimaginably high-end hotels, but also wrote a very classic treatise on French cuisine. Barr makes this story very fascinating!

The partnership of Ritz and Escoffier lasted until the coronation of the new king, Edward VII, in 1901. On the day of the Coronation (which was suddenly postponed due to the king's having an emergency appendectomy), Ritz suffered a blackout and a total breakdown, and he never recovered his health enough to continue to manage his famous hotels. Escoffier remained productive for another 20 years, until his retirement.

A few months ago I reviewed Escoffier's memoirs, including much more about his recipes: https://maefood.blogspot.com/2018/06/auguste-escoffier-memories-of-my-life.html


Author of this content is Mae's food blog: Maefood dot blogspot.com.
If you are reading it somewhere else, it's been stolen!

Neat post. Sounds like a fascinating book. Learned a lot -- thanks for all the details. The period from around 1880 to 1910 or so in both the US and England is really fascinating. Anyway, fund read -- thanks.

This sounds like a fun and fascinating book -- I love that period, and boy, it would be interesting to know more about these two. Thanks for bringing it to my attention.

Puttin on the Ritz has always been one of my favorite songs, probably because I love, love, love Fred Astaire musicals!

I really liked this book, which I read when it first came out.

I was only halfway through your post when I went over to my library and downloaded the book!!!
Looking forward to reading it.

I have stayed at the Ritz Carlton in Montreal...

We're headed to the Ritz in Naples FL for a conference next week so I found this very interesting.

Another interesting book. You are adding to my TBR list! ;-)