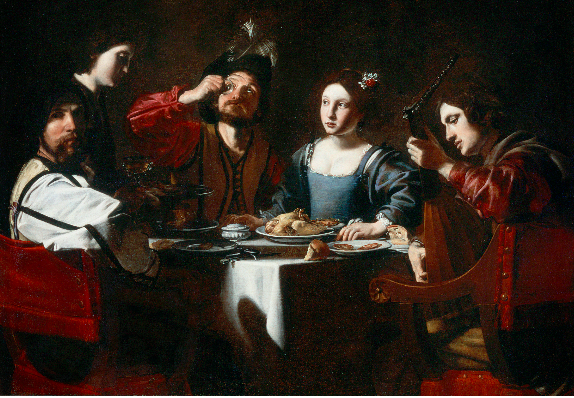 On our recent visit to the St.Louis Art Museum, two paintings of food particularly impressed me. The first is "Banquet Scene with a Lute Player" by Nicolas Tournier (1590–1639). It depicts a variety of food on a dining table where several men and a woman are eating. One of the men is shown in the act of drinking from a wine glass. Documentation about the painting suggests that the woman is a courtesan, entertaining the men.

The second painting that seemed to me to depict an unusual choice of food was "Still Life with Chianti Bottle and Celery" by Max Beckmann (1884–1950). I can't remember any still life that I've seen in the past including celery!

Beckmann, one of the most admired of the early-twentieth-century German painters, has a special relationship to St.Louis and the Art Museum, which owns the largest collection of his works in existence. From 1948 until his death in 1950, Beckmann lived in St.Louis and taught at the art school of Washington University. A very rich art collector in St.Louis, Morton D. May (you know, the May Company Department Stores!), bought many of his paintings, including this one, which was painted in 1949.

Author of this content is Mae's food blog: Maefood dot blogspot.com.
If you are reading it somewhere else, it's been stolen!
Posted by Mae Travels at 2:06 PM

Love food art! Both of these paintings are new to me. Thanks for sharing them. :)

I've not seen either of these paintings before--fascinating. Thank you for sharing them.

In the first painting I especially like the different expressions on all their faces. You have to wonder about their characters and what they were thinking. So expressive.

I am avid when I read and watch films to look for food angles. As much as I love art and museum going, I have never looked with a culinary eye in these locations. You are on to something. I love the Beckman piece and as I go to museums now, I am going to look for celery depictions! :)

No wonder each time I asked for Quaker Puffed Wheat or Puffed Rice to be stocked at the standard grocery stores I received blank stares and "promises to look into it" ....
Nothing ever happened. Thinking I could buy anything if I Googled it, I found to my despair that my favorite cereals were no longer "profitable" to be made. Silly me. Will I buy the sugary kiddie brands so processed and promoted? No way. Another landmark item bites the dust. Shame shame. Amy K.