Wordy Wednesday: What is authentic? What is mahoosive? 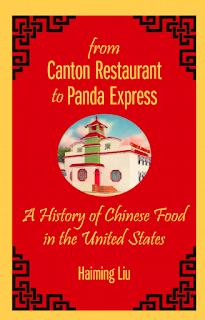 For the next meeting of my culinary book club, I'm rereading Haiming Liu's book From Canton Restaurant to Panda Express: A History of Chinese Food in the United States. On second reading, I am again finding many insights into American history, Chinese history, and more. See this earlier blog post for my review.

One idea that comes up often in Liu's book is authenticity. You'll hear people say often that one or another version of Chinese food is more authentic than another. Above all is the question whether chop suey was even a Chinese dish at all. Liu discusses these questions in a very interesting way.

Liu begins his discussion of authenticity with the earliest Chinese restaurants. These were founded during the Gold Rush and era of the forty-niners in San Francisco, and for the early years had mostly a Chinese audience. Chinese cooks also made Western meals for miners and city people, who didn't seem to want to eat Chinese food. Prejudice against Asians forced many Chinese immigrants to establish either laundries or restaurants because they were excluded from most other trades or professions.

The rising popularity of Chinese food, especially chop suey, dates to the visit of diplomat Li Hongzhang to the US in 1896. In response to the publicity he generated: "The Chinese restaurant businesses made a rebound in the form of chop suey houses. ... Chop suey became an imagined authentic Chinese dish. Chinese immigrants quickly capitalized on the legend. They changed chop suey’s ingredients, flavor, and method of preparation to fit the palate of Americans." (p. 2-3).

Although Americans continued to enjoy chop suey, and were rarely aware of other Chinese foods, by the 1920s they became more aware that chop suey was "only an imagined authentic Chinese food." Specifically, "In 1924, the Los Angeles Times carried an article entitled 'China Has Most of the Things Chinese, But Chop Suey Isn’t to Be Found There.'" The article explained, "China has played a little joke on the world. Its citizens in America have popularized chop suey as if that dish were characteristically Chinese. It is not. It is unknown in China." The New York Times, in 1928, "also noted that the dish was virtually unknown in China." (p. 66).

American consumers continued to view chop suey as the only Chinese food until the 1970s. At this point, interest in actual regional Chinese dishes awakened, especially in New York and Los Angeles. Cooks who had immigrated from Mainland China to Taiwan and then to the US were opening more ambitious restaurants, and the new tastes caught on. Before they came to the US, these refugees fled from the Communist regime in mainland China to Taiwan, bringing with them authentic regional foods: "Customers could find Sichuan spicy beef noodles, Hunan stir-fried chicken, Shandong steamed buns, Shanxi’s hand-sliced noodles, Beijing boiled dumplings or hotpot, Shanghai steamed dumplings, Mongolian roasted mutton, or Yunnan’s rice noodles soaked in burning hot chicken soup, called 'bridge-crossing.' The rapidly growing translocal restaurant business quickly made Taipei a famous tourist destination." (p. 95).

At Peng Garden Restaurant in New York, Chef Peng, one of the Taiwanese/refugee chefs, began to serve Hunan cuisine, especially a dish of his own invention, General Tso's Chicken, which he had invented in Taiwan. Over time, this dish was adapted to American taste, with a sweeter sauce and with broccoli, a vegetable unknown in China. "This contradictory character of General Tso’s chicken or other Hunan dishes made in Taiwan helps us understand the nature of Diaspora Chineseness. Chinese food does not exist in a social vacuum. Authenticity in food culture is often a flexible concept." (p. 101).

Other regional Chinese cuisines, introduced via Taiwanese/refugee chefs of the time, also achieved recognition among Americans. "However, few American customers knew that those Hunan, Sichuan, Mandarin, or Shanghai restaurants were operated by immigrants from Taiwan rather than from mainland China, which did not have diplomatic relations with the United States and could not send immigrants until after 1979." (p. 86).

In 1960s Los Angeles, according to Liu, Chinese immigrants created another new type of Chinese restaurant, with both food and atmosphere designed to attract Chinese customers rather than Westerners. For example, "At the Golden Palace, non-Chinese were ushered to one side of the restaurant, decorated with plush black banquettes and dim lights, and Chinese to the other side, which has a more authentic décor, full lighting, and simple square tables and chairs."  (p. 111).

At about the same time, "Cecelia Chiang was probably the first restaurateur in San Francisco who wanted to introduce authentic Chinese cuisine with a variety of regional flavors. She opened her first Mandarin Restaurant on Polk Street in San Francisco’s Chinatown in 1962." The Chiang family ran the restaurant for many years, and eventually her son became a partner in the successful and widespread chain P.F. Chang's. He struggled to convince American consumers to accept his more authentic menu, but Liu says his determination succeeded in selling "authentic Chinese food rather than the old-fashioned chop suey type of meals....The inspired concept of this place is to fuse authentic Chinese cooking with the amenities of a fine Western restaurant.” (p. 129-131).

Another example of serving authentic (or almost authentic) Chinese regional dishes to Americans is the fast-food chain Panda Express. Liu points out that their adaptation of Asian flavors is meant to please Americans in shopping malls, university food courts, airports, and other places where the chain competes for customers. He admires their success! But he adds, "It is difficult to say if Panda Express serves authentic or somewhat Americanized Chinese food." (p. 138).

I was very interested the exploration of the questions about authenticity throughout this thought-provoking book. Authenticity can be a perplexed question. Food writers and critics in general talk not only about "authentic" Chinese food but also about "authentic" pizza, "authentic" tacos, "authentic" bagels, "authentic" sushi, and lots of other foods. Usually, they are complaining because the recipe for these items varies from one city or country to another -- or from artisanal to industrial -- and they have a favorite, which they consider to be the real thing. Like Chinese food, these items have often migrated from one culture to another with various ethnic or refugee groups, and comparisons often ignore the natural changes that happen, for better or worse, when people adapt to new circumstances.

The late, great Jonathan Gold, for example, was a skeptic on "authentic" pizza, which in some views has authentic versions in Naples, Chicago, New York, Los Angeles, Buenos Aires (link), and lots of other places -- even Tokyo (link). He wrote: "The words 'authentic,' 'New York' and' pizza' in conjunction mean nothing but trouble... If you ask me, the best New York pizza is made 90 miles north at Pepe's in New Haven, but as a Californian I don't have a vote." (source) Anyway, that didn't mean Gold had no opinion on the world's best pizza. He said "the modernized Margherita made famous by Franco Pepe, whose pizzeria in Caiazzo, north of Naples, is considered by some people (including me) to be the best in the world." (source)

There's really a lot to say about this one word: authentic. And since it's Wordy Wednesday I will share another random word that's entirely new to my vocabulary:

It means very huge. Maybe it applies to authenticity. A mahoosive issue?
Posted by Mae Travels at 2:38 AM

Fascinating discussion. I kinda sorta get the quest for wanting "authentic" dishes, but really only kinda sorta. I'm more into verisimilitude I guess -- food that's true to the spirit of the cuisine. And I don't believe I've ever heard of mahoosive! Neat word. :o-)

Could mahoosive have come from massive? It's a good word and a good find no matter where it came from.

I did not know that about chop suey. That was very educational. I have heard some people say mahoosive in regard to a giant size. Don't know if it's a real word or something made up that has stuck in our language!

@Tina -- "mahoosive" was added to the Oxford dictionary in 2014. People are making up words all the time, and some do become widely used and thus the dictionaries include them. In 2014, a thousand words were added. Just shows that the language is alive!

@Margot -- Yes -- the Oxford dictionary gives this origin: "1990s: probably a blend of massive and a phonetic respelling of the first letters of huge."

Also -- for anyone who wants to know how words get into the dictionary, I recommend the book
"Word by Word: The Secret Life of Dictionaries" by Kory Stamper. It's very informative and reads well.

Very interesting. When my Chinese daughter moved in, I made chop suey. She loved it but had no idea what it was LOL>

Until CTB read Fuschia Dunlop's book I had no idea the Chinese food was so regional. That's about the only thing I gleaned from that read. This one sounds much more interesting!

I love the word mahoosive and I love this post. We eat so many ethnic foods that really aren't authentic.

I like the word mahoosive. It just rolls off the tongue - mahoosive.

We have an actual "Chop Suey" restaurant here in town. You would think at some point they would have changed the name. The book sounds interesting, and actually the term authentic is pretty much subjective. Once thing is certain: change.