"The female head of household needs to be recategorized from 'born to cook' to 'born to figure out how to feed people.' The domestic obligation really revolves around problem-solving: the fact that there are always hungry mouths to feed is the weary load of all humans, but especially all women. Having a single member of the household cook all the food for a single meal or many meals using what we now label 'fresh,' 'raw,' or 'whole' ingredients is but one choice." (Making Modern Meals, p. 110) 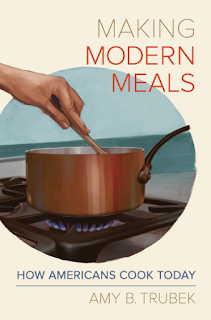 Making Modern Meals by Amy B. Trubek (published 2017) is a scholarly study of how Americans get their dinner, and sometimes lunch and breakfast. In other words, it's not just about how people cook, but an attempt to see how they put food on the table, whether it's prepared at home, at a supermarket, at a take-out restaurant, or from a fast-food place.

Trubek points out that cooking now more than ever is a paid occupation, and that insight into "social changes in many aspects of meal preparation" can be understood by examining what paid cooks do. We are looking at "a changed reality in Americans' relationship to where certain meals are consumed and what is considered a culturally appropriate meal structure." (p. 104-106)

The author is aware of history, though the current state of cooking in America is the principal focus of the book. Her clearest summary of the past is this:


"As the activity of feeding a household became connected to women's roles as primary nurturers, the category of the 'good cook' became something to fight for. Women needed to enhance the social value of cooking -- they needed to show it to be more than mere tedium or necessity." (p. 45)

Although looking beyond just the question of twenty-first century home cooks and the kitchen skills they have -- or maybe don't have -- seems obvious, there's also something original in Trubek's anthropological approach. She didn't just interview people, but her research involved filming a number of meals being prepared in homes, and interviewing the women and men who did the preparation to learn about about their choices and their goals.

The organization of the book is itself enlightening. The chapters cover cooking as people see it:

People are eating, obviously -- mainly at home. Pundits are always bemoaning the loss of cooking skills among Americans (especially housewives), and are constantly worrying about issues of nutrition, quality, how children are trained to eat and eventually feed themselves, and many other things. Trubek steps back from the usual approach and asks more general questions about where home meals come from. The result: a readable book, though sometimes more academic than many snappy popular treatments of these issues.
Posted by Mae Travels at 10:00 AM

I'm glad to see someone is looking carefully at this.

This sounds interesting. It always annoys me that women have prepared meals for centuries and it was an expected duty but let men start doing it for money and suddenly "celebrity chefs" are a thing.

It sounds like an interesting book. I am fascinated by what other people cook or if they opt for Uber Eats (which has a huge advertising campaign here at present), and whether they cook for enjoyment or food merely as fuel.

It is interesting all of the categories for cooking. In 3rd world countries, I think the only category might be for survival. Sounds like a fascianting book.

Sounds great. Thanks for covering this book.

It's interesting that in this day and age, meals still mainly fall on the female figure in the household. I started to get a little rankled by it but then thought about it and it is true. I cook because I love it. My husband grills and is happy to step in and cook when I don't feel like it but that is a rarity. I guess that maternal instinct runs deep.