Wordy Wednesday: Aretha's melisma and names for the winds

This week I noticed several very interesting and unfamiliar words in my reading. First, I learned the names of three varieties of chocolate in Kristy Leissle's book Cocoa:

"Beyond the trinity of Criollo, Forastero, and Trinitario, cocoa in fact has many varieties – called strains, varietals, types, or cultivars – that have distinct characteristics." (p. 228). 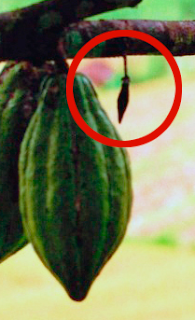 In the same book (which I reviewed here earlier this week), I discovered the name of a wind, the harmattan, as well as learning a new word about the cocoa plant:


"West Africa’s harmattan [is] the windy season that occurs from around late November through March. Harmattan winds originate in the Sahara Desert and blow southwards across the Sahelian semi-desert region, filling the air with dusty grit all the way to the Atlantic coast. ... In particular, the 2015–16 harmattan was the strongest in thirty years. It began early and, just at the point when it would typically end, the winds strengthened, destroying delicate cocoa flowers and cherelles (baby pods)." (Cocoa, p. 142 & 145).

In the photo of a cocoa tree, a cherelle is circled. This image comes from a very interesting website that defines all of the terms used in growing and harvesting cocoa. See: "The cacao tree and its fruit." LINK HERE.

"Who has seen the wind? Neither I nor you."

Besides the harmattan, which affects the cocoa growing regions south of the Sahara Desert, I am fond of names for other winds throughout the world. I've felt the mistral blowing in the south of France -- a strong, often cold wind that gives people headaches or even drives them crazy. Or in Venice, the bora -- "a northern to north-eastern katabatic wind in the Adriatic Sea." Katabatic is another great new word. It means "a wind that carries high-density air from a higher elevation down a slope under the force of gravity." There's also a katabatic wind in Greenland called a piteraq.

Another wind name is the sirocco, a dusty or rainy wind that blows hot, dry desert-air from North Africa towards the Mediterranean. Long ago, I learned the word sirocco because it was the name of a popular perfume.

It seems that there are many other winds that are remarkable enough to have names -- the chinook winds of the Canadian prairies; the shamal winds in Iraq and the Persian Gulf; the tehuantepecer, or tehuano, winds in Mexico; a williwaw or sudden blast of wind in the Strait of Magellan and elsewhere; and the brickfielder, a summer wind in the desert of Southern Australia. I learned about them from googling, of course.

Note: I haven't read the book titled The Name of the Wind. But I love the little poem "Who has seen the Wind?" by Christina Rossetti. And finally: wind gods gave their names to the winds in many cultures, like the Greek god Zephyr --  as obsessively collected HERE.

In a completely different context, during the past week I read many wonderful obituaries for Aretha Franklin, who died last Thursday. A word that's new to me gives a name -- melisma -- to her characteristic way of singing a whole group of notes to just one single word of text:


"In the end, though, it was Franklin’s brilliant musicianship that allowed her to shape her talent and her ideas into an epochal body of work. Her music was always soulful, whether she was singing a call-and-response gospel number or a spun-sugar confection aimed at the pop charts. Her use of melisma was impeccably tasteful — always just enough, never too much. She told stories in a way that made you dance, cry, love, laugh, even try to sing along." (Eugene Robinson, "The Queen is dead. Long live the Queen." Washington Post, August 16, 2018.)

"Another trademark vocal tic was her use of melisma, or gospel or church runs, where she’d dance around a note or a syllable, pushing it to the point of perfection, playing with it until it said what she needed it to say." (Lucy Jones, "Aretha Franklin death: The agony and ecstasy of the Queen of Soul," The Independent, August 16, 2018.)

"With her church-bred voice, the “(You Make Me Feel Like) A Natural Woman” singer brought gospel-style melisma to the pop world. Those vocal runs you hear everybody trying to do on “American Idol” and “The Voice”? That’s all Aretha." ("How Aretha Franklin changed music forever," New York Post, August 16, 2018.)


For more interesting exploration of new and unusual words, check the Wednesday blog posts of Bermuda Onion HERE.
Posted by Mae Travels at 6:49 AM

I can't really say I'm a fan of melismas - syllabic singing is really where it's at - but I really loved Aretha. Interesting discussion of wind!

Really fun read! And speaking of reading, sounds like yours has been exceptionally entertaining lately. Lots of new vocabulary for me in this post -- always love learning new words. Thanks!

I thorughly enjoyed reading this post. The word eclectic comes to mind when I read a post like yours. I love that you read widely and then pull it together in this way. Those two winds are new to me and are super interesting.

I wondered what melisma was. You looked it up. Thank you!

For many of us, "Scirocco" (variant spelling of sirocco) first came to notice as the name of a popular front-engine, front wheel drive sport hatchback made by Volkswagen back in the mid-1970's.

Melisma was new to me as well. Nice post, Mae.

This was so interesting to read as I love learning new words. I live in one of the windiest places in South Africa and yet we don't have a special word for our wind. The black South Easter brings the most damage.

I didn't know there were so many varieties of cocoa, the etymology of some words surprises me. That was very enlightening.