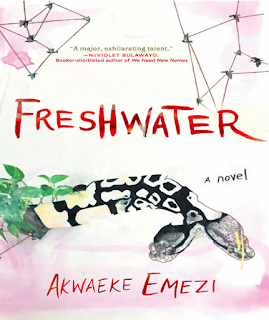 After Paris in July -- a month of reading and writing about Paris -- I picked a novel that's as far from Paris as I can imagine. Freshwater by Akwaeke Emezi is a story of gods and humans (published in February, 2018). The gods, who are the narrators of most of the novel, are gods from the African/Igbo tradition.

"How do you survive when they place a god inside your body?" (Kindle Locations 2395-2396) one of these gods asks. This question is central to the sad and tormented life of Ada, a young human woman, whose psyche and all her actions are inhabited and dominated by these gods. Ada's father is African and her mother is South Asian. In the course of the novel, Ada lives in her father's native African towns; in Virginia, where she goes to college; and in other US locations. Her mother sometimes lives in Saudi Arabia. She had other relatives in England. But the gods in this world of magical realism go with her everywhere and slowly control her life more and more.

The gods, who sometimes speak as a group, other times individually, are totally amoral and antithetical to human morals or decency in human relationships. They explain themselves:


"Everyone knows the stories of hungry gods, ignored gods, bitter, scorned, and vengeful gods. First duty, feed your gods. If they live (like we do) inside your body, find a way, get creative, show them the red of your faith, of your flesh; quiet the voices with the lullaby of the altar. It’s not as if you can escape us— where would you run to?" (Kindle Locations 508-510).

The gods revel in taking over Ada's body, causing her many types of intense suffering and self-destructive behavior. Often, she isn't even aware of what she seems to have done in her interactions with other humans when a god was in control. Each of the gods has a name and an identity, and together, they belong to a particular tradition of African/Igbo gods --the novel explains everything you need to know about them. One god, for example, is a python -- an inhuman snake god. Another god says: "I was unforgiving and petty and vindictive. Don’t expect anything else from an ọgbanje."(Kindle Location 1359). Another one describes itself and its fellows as tricksters: "They didn’t give a shit about humans, they enjoyed causing pain— they were me and I was them." (Kindle Locations 1499-1500).

You could interpret this as the story of a young woman with multiple personalities, but the author's powerful portrayal of each of the gods and its forces made me believe that these gods were truly present, somehow. The gods refer to her not as "Ada" but as "the Ada" -- that is, an entity that they are controlling, and that gives them a human body. One of the gods touches on this question: is she really a mentally troubled person or is she driven by forces that are real but not really part of her? The god says:


"Sectioning the Ada gave her isolated pockets of memory, each containing a different version of her. There were versions to whom bad things had happened and, therefore, there were also versions of her to whom these things had not happened. The Ada could look back on her life and see, like clones, several of her standing there in a line. This terrified her, because if there were so many of her, then which one was she? Were they false and her current self real, or was her current self false and it was one of the others, lost in the line, who was the real Ada? We could not alleviate her terror because we would not allow a bridge between her and the past sections of her. We had separated them for a reason. Many things are better than a complete remembering; many things we do are a mercy."  (Kindle Locations 2416-2421).

I'm sure you could look up the African myths that are embodied in this story, and that this would provide a lot of additional richness to the reading experience, but I enjoyed it without any extra work doing so. The reviewer in the New Yorker puts it this way: "The book would have made grim sense through a mental-health lens; instead, it is an indigenous fairy tale." (link)

Freshwater is a powerful novel. Several reviews compare this fiction to the actual life of the author, but I prefer to let the novel stand alone, without the author's complex personal story. As the reviewer in the L.A. Times says: "Emezi’s lyrical writing, her alliterative and symmetrical prose, explores the deep questions of otherness, of a single heart and soul hovering between, the gates open, fighting for peace." (link)
Posted by Mae Travels at 6:30 AM

I'd have to cover up that cover if I decided to read the book.