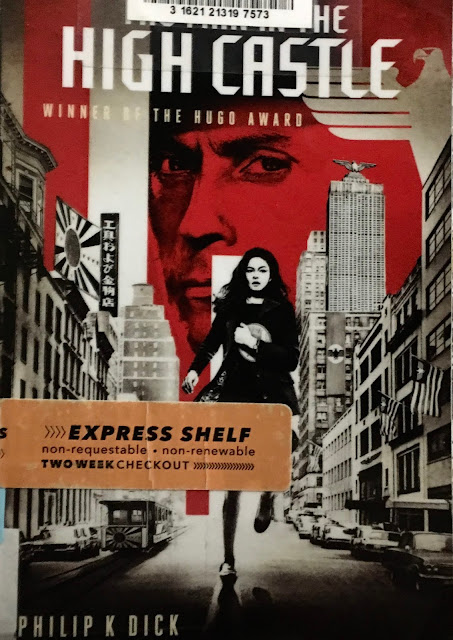 This 1962 work by Philip K. Dick is quite a good book — I like counter factual history. Specifically, as you probably know, the action of The Man in the High Castle takes place in a world where Japan and Germany won World War II and have split up the United States between their two authoritarian regimes.

The book is full of action and intrigue: very suspenseful. But I was interested in one particular conversation between two of the characters. They are discussing the genre of counter factual history, because they are all reading a counter factual book within the book — specifically, a work where the allies actually HAVE won World War II. Their conversation:


“I see you’re reading The Grasshopper Lies Heavy,” he said... “A mystery? Excuse my abysmal ignorance.” He turned the pages.

“Not a mystery,” Paul said. “On contrary interesting form of fiction possibly with genre of science fiction.”

“Oh no,” Betty disagreed. “No science in it. Nor set in future. Science fiction deals with future, in particular future where science has advanced over now. Book fits neither premise.”


As you see, there’s a lot of meta stuff in this book! Next step: I want to watch the recent TV version of The Man in the High Castle.

UPDATE, August 28, 2018. I watched the first episode of Man in the High Castle, and didn't feel inclined to continue watching. I also read two more novels by Philip K. Dick, which I found pretty interesting. I particularly liked Blade Runner (originally titled Do Androids Dream of Electric Sheep?, which was the basis for the film.

Sounds like a good "what if" suspenseful book to check out. Another good review, Mae!

I have never heard of this book....sounds like DEEP reading!