Cocoa: Who cultivates it? Who processes it? Where does it come from? 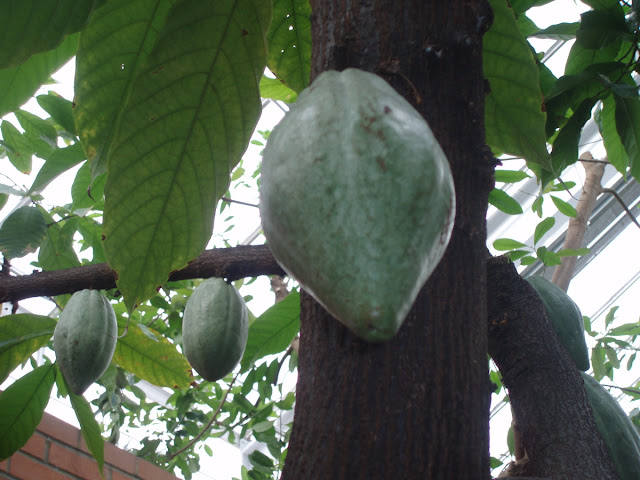 Above: cocoa pods on a tree in the greenhouse of the botanical garden in Ann Arbor. 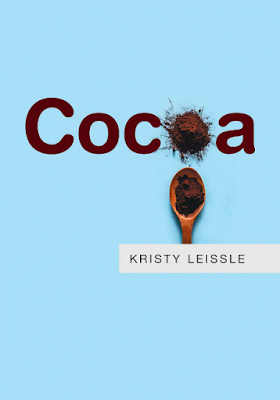 Chocolate, as most of us know, comes from cocoa beans that develop in the pod of a tropical tree. Few of us know about the farm workers who tend the trees and harvest the beans. Fewer still know about the economics and trade issues for this luxury food.

Cocoa and chocolate are major commodities. The view of food as a resource or as a commodity is different from viewing its culinary qualities. Kristy Leissle's book Cocoa (published 2018) treats the subject of cocoa as a resource and a commodity, and it explores the conditions in which African, South American, and Asian farmers work to produce this valuable product.

Chocolate is unlike foods that we might see in our own or a neighbor's garden or in a corn field beside an interstate highway. "Nothing about the tree suggests a relationship with industrial chocolate," Leissle writes. Fresh from the pod, cocoa beans "can be bitter and nauseating to eat, even in small quantities." (p. 60 & 63).

Chocolate, obviously, is highly processed. Steps from harvested beans to a candy bar from Hershey, Cadbury, or a boutique brand include removing the beans from the very tough pod, fermenting and drying them, shipping them to a processor, grinding, cooking, and tempering the chocolate, adding ingredients such as sugar and milk, and forming the chocolate mass into familiar shapes. These processing steps almost always take place in several places in the world: fermentation and drying sometimes are done on the farm or in the country of origin of the beans. Grinding, cooking, and tempering are usually done in factories of the major processors, listed in the quote at the beginning of this post. The final steps of making confections are sometimes done by the major industrial processors, sometimes by small-scale artisans. 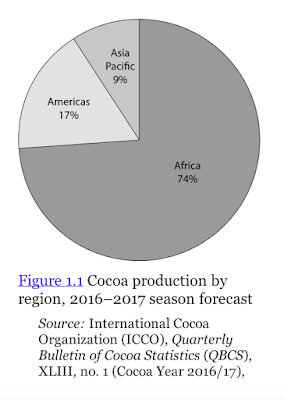 Cocoa as a commodity has the potential to yield a lot of profit at each step of production. Thus:


"From the earliest records of its uses among the Olmec, Maya, and Aztec civilizations, cocoa has always been politicized. In comparison with other food commodities, cocoa has a wide range of values – social, cultural, economic, psychological, physiological, emotional, and so forth – and this book explores many of them. But no matter how else it is valued, cocoa is always a political tool." (p. 37).

The politics of cocoa as a commodity are rooted in the fact that it grows only in the tropics, and is thus a crop from some of the most disadvantaged areas of the world, as illustrated in the graph in the illustration (from Cocoa, page 25).

Chocolate is a luxury product consumed by inhabitants of the industrial regions of the world, the author points out, while its production can only be accomplished by these poor, rural, tropical farmers. Ghana's farmers for example, experience "unreliable electricity, insufficient sanitation facilities, poor schools, and inadequate housing." The cause of these problems is not "that farmers weren’t producing enough cocoa to fund improvement of all those things – it was that the government was not reinvesting cocoa taxes in farming communities." (p. 210).

Cocoa farmers are not privileged to consume chocolate: many have  never even tasted it, and most have not developed a taste for it, except perhaps a thin beverage made from less-processed beans. The author writes:


"While growers in Ghana may not want to eat chocolate regularly, many expressed the desire for chocolate to be available, as a sign of Ghana’s participation in value addition. Chocolate’s inaccessibility was a reminder that, though they fed the industry with its most necessary input, farmers remain marginalized from the realm of the finished product." (p. 86).

I was fascinated by the author's discussions of the lives and challenges of cocoa farmers, especially in the two highly productive African countries of Ivory Coast and Ghana. The political side of this history is that these governments tax and often exploit the cocoa growers, who receive such a small share of the world price for their highly-desirable commodity.

The poverty of the farmers, the fact that women and children on the farms are in an even worse situation than the men, the predatory practices of the governments, and many other aspects of third-world politics are all presented in interesting detail. The author makes every effort to demonstrate that child labor and other things that westerners criticize may be different for people in vastly different environments, and especially that improvements in their lives require very complex thought and appropriate solutions. She writes:


"Singling out cocoa as a sector that uniquely endangers children exposes the cognitive dissonance that results from wanting to eat chocolate – a luxury associated with romance, holidays, and happiness – while not wanting to harm children. Because consumers in the Global North do not benefit from child labor in, say, domestic service in Ghana, chances are they do not experience the same personal conflict upon learning that such exploitation is happening. But were an initiative to make it impossible for children to grow cocoa, there is every chance they would be absorbed into other industries where conditions are as likely to be harmful." (p. 228).

Finally, Leissle says: "We are used to paying only a little for chocolate and balk at higher prices for what has long been an affordable luxury. This is not to say that shoppers are consciously acting unethically when buying low-priced chocolate. Rather, that low price is part of what sustains an unjust system in which consumers play a role." (p. 228).

I read about this book in the blog "Food Politics," written by Marion Nestle, who says: "If you wonder why food is worth talking about, Cocoa is an excellent illustration of how even something used to make candy connects to many of the most important social, economic, and political issues faced by today’s world." (source)
Posted by Mae Travels at 9:58 AM

You must be the fastest reader I know because these are NOT easy books to read, especially to write about them as well as you do. I envy that. Both the reading AND the writing!

We recently visited Grenada and visited a cocoa and spice farm. It was amazing.

Hi Mae, What an interesting post. Visiting you at Weekend Cooking. I LOVE dark chocolate and drink cocoa every day. My brand is organic and unsweetened. Not one of the kinds you mentioned. I'll pin this post and wish you a happy weekend. Nancy Andres @ www.colors4health.com

Mae,
Quite an interesting read about such a favorite- although I've always loved anything chocolate, lately I've been using the organic unsweetened cocoa powder that I had brought back from the Dominican Republic.

This one is on my TBR and I'm really glad to hear what a fascinating read it is. ;-)