All of July, I have been reading books about Paris, checking recipes on the website of Cuisine et Vins de France, looking for unknown books by French authors, and reading posts that my fellow bloggers wrote about their own views of Paris. All this for the annual event Paris in July, hosted by Tamara at the blog Thyme for Tea. I thought about writing a wrap-up of what I've learned by my reading of books, magazines, and other bloggers' work this month, but I'm leaving that to someone else and trying to remember what I've always loved about Paris, which I last visited in 2016. 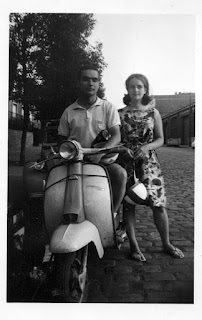 Paris has been my dream city for many years, since the first time that I saw it. I was on the back of the Lambretta motor scooter on which we were wandering around Europe in the 1960s. The scooter wasn't safe on big roads (I have no idea if the REALLY big autoroutes had even been constructed back that far in time). So we came in through a series of rather run-down neighborhoods full of not very interesting post-war buildings. Until suddenly we were scooting alongside the river and coming right up to the back of Notre Dame de Paris. I was breathless! (Breathless: a perfectly-named movie about Paris from a few years earlier, 1960.)

We found a very cheap hotel on the Quai de la Tournelle which directly faced Notre Dame. One of the first museums we went to was the Cluny Museum, to see the Unicorn Tapestries, which I'd been reading about for years. Breathless! We've gone back to Cluny on every Paris trip, except when it was under construction.

We mostly ate meals in student restaurants because Len had been enrolled in the  University of Grenoble, and we had special cards that entitled us to this privilege. But we had received a wedding gift of a 100 franc note, which we used for one real high-end meal at a serious restaurant. I wish I recalled what we ate, but all I remember was that it was amazingly delicious, and we were surprised that the waiters and so on treated us as honored guests, not as the poorly dressed student wanderers that we were.

In 1976, we spent most of a year in Paris, living in a very small apartment on Boulevard de Grenelle. Our balcony looked out at the elevated metro train -- noisy! especially when a terrible heat wave hit the city in late May.  The famous Poilâne bakery was across the street. 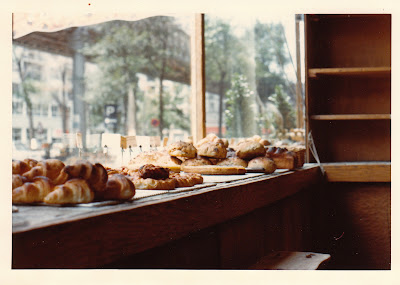 The sidewalk in front of the bakery could be seen from our balcony, though the facade was mostly hidden behind the metro. Sometimes we could see a long line of people waiting to buy the famous bread. And early in the morning, we could watch the deliveries of cords of wood to the cellar door that gaped in the middle of the sidewalk. Poilâne was famous for its wood-baked bread, and the ovens were in the cellars where the wood was being delivered. In the photo from inside the bakery, taken in 1976, you can see the elevated metro and dimly make out our building across the street.

We ate Poilâne's bread often, as well as the fantastic croissants, apple turnovers, rolls, and other Poilâne products that can be seen in the photo. Len is trying to recapture some of that taste with his current baking adventures.

Under the elevated tracks facing our building, city workers constructed the temporary stalls for an open-air market on Sunday and another day, maybe Tuesday: a good place to buy produce to prepare in our tiny kitchen. Right around the corner from us was a wonderful shopping street: Rue de Lourmel. I remember specialists in fresh fish who would tell me how to cook what I bought, specialists in exotic fruit and vegetables, and especially an amazing cheese shop called Cantin. This original Cantin shop doesn't seem to be on Rue de Lourmel any more, though there's another Cantin owned by the daughter of the original owner.

Sadly, there is another landmark on Boulevard de Grenelle in the other direction, beyond the huge concrete building where we lived that year. This is the site of the Vélodrome d'Hiver, or indoor bicycle racing arena, which was torn down in approximately 1959, and replaced by other huge middle-class apartment buildings in solid concrete. The Vel d'Hiv is mainly remembered in history as the site of a huge round-up of the Jews of Paris in July of 1942. Something like 13,000 people, including 4000 children, were herded into the arena without food, water, or sanitation, and held for days before being shipped off to Auschwitz. I often walked past the monument and thought about this collective horror. Depressingly, the signs commemorating the past were often defaced by right-wing fanatics, but at the time I thought they were special to France. Now I'm thinking again of those families torn apart forever in 1942, and putting it together with what's happening to many innocent immigrant families in our own country -- in 2018. This is not a dream of Paris, but a nightmare.

We've also made many shorter visits to Paris. I recall a specific day when I was alone because Len had to fly back on a different plane. I had lunch alone at a restaurant near the historic center of Paris on the Ile de la Cité in Place Dauphine. This is quite near the office of Inspector Maigret, where he sometimes has his lunch. Yes, I know he was fictitious, but for me he's a real Parisian. I was seated at a table with another tourist, a German woman, and had a very interesting conversation in French, our mutual language, about what we liked about Paris. I don't know why it was memorable! But it was.

On both long trips and many short ones, I searched for hours in a quest to collect Mona Lisa parodies, which I've posted on this and other blogs many times. I looked in antique shops, bouquinistes (that is, those book stalls along the Seine), specialists in old paper, and modern card shops. Sometimes I found a few wonderful items, sometimes not. But it's always good to have an obscure goal that takes one out of the tourist routine! 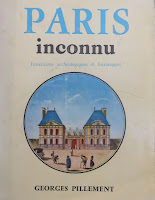 In 1976, I also followed the guidance of a book that a friend gave me. Its title was Paris Inconnu, and it described the history of very old and deteriorating buildings throughout Paris. This book is now very obsolete because most of these buildings have since then been restored and serve as museums or high-end office space or apartments worth millions of euros. The Picasso museum and the Jewish museum of Paris are both in such restored buildings. I'm amused to recall how I peeked into slummy courtyards to look for Renaissance archways and stone carvings visible behind rows of garbage cans and parked bicycles.

Another friend that year introduced me to a book titled Paris pas Cher, which explained how to find bargains. She was especially fond of one recommended store that had mid-level designer clothing and other not-quite-high-end clothing in rejected lots from the manufacturers -- who still made clothing in Paris then. Dresses, blouses, and kids' clothing, particularly by design house Cacharel, were often sold with the center of the label cut out (or in French, dégriffé) so that a person who knew labels could recognize it, but so it was clearly designated second-quality. We found quite a few nice things shopping there. (The edition that I still have is from the next long stay in Paris, as shown.)

I'll just mention that in 1989, we spent a full year living not far from the same place, in a relatively unpleasant apartment on the ground floor of an otherwise nice building. As in 1976, Len was visiting at the University of Paris in the ugliest complex of buildings we've ever seen. But it was a wonderful year with more visits to great restaurants and fabulous museums, discoveries of food, wine bars, art, books, and a growing familiarity with subway stations and obscure neighborhoods. Above all, during each stay in Paris we enjoyed the company of many Parisian friends and many visitors who also appreciated Paris. 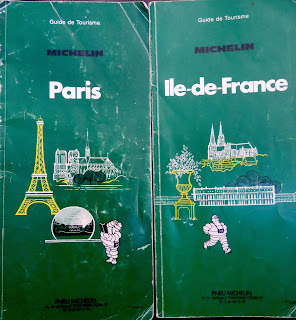 Well, that's my wrap-up of memories of Paris, particularly the small things rather than the ones that get on everyone's list. You know the list. You can find it in any guidebook: the Louvre and the Mona Lisa, the Eiffel Tower, Impressionist museums, a walk on the Champs Élysée, a dinner cruise on the Seine in one of the famous bâteaux-mouches. In fact, we've never done a dinner cruise on the Seine, just watched the brightly lit boats go by as darkness fell and the lights of Paris came on. In that first hotel when we stayed on the quai, spotlights from the passing boats would shine into our eyes when we were trying to sleep.

I'm sure I've written down some of these thoughts before, though not recently. Paris in July is a great idea!

I'm so glad you posted this. (CLuny features in my post going up today too!) I loved your memories and hearing what it was like to live there. Rick and I are hoping to go to Poilaine when we go in October. It all sounds wonderful -- having a long time to really live and discover a city. This is just terrific.

What great memories, Mae! Love the pic of you guys and the scooter. Can't remember the autoroutes in Paris, but I definitely remember the autobahns in Germany in the 60's! Talk about life in the fast lane... :-)
Great that your balcony looked out over the city, and bet the bakery was had some fantastic baked goods. So many things to do and see in Paris.
Our older just returned from there, and showed me the Louvre book, very heavy and a work of art itself. Then he had the map of the the museum. I thought it was huge when I visited it, but it must be humongous now! I think they told him it would take 100 days at least to see everything in it, and that's just stopping for a couple of seconds at each exhibit.
I really enjoyed reading this post, and you definitely seem to take it all in perfectly!

Wonderful.
Had been to Notre Dame, but never behind Notre Dame.

Mae,
Your memories of Paris were such a pleasure to read. I could feel you passion as you relived your adventures. What a treat to have had the opportunity to spend that time in Paris and thanks for sharing.

I am so jealous that you have been able to spend so much time in Paris. I would love to go back again. I haven't been since 1994 which is way too long.

Mae, your reflexions make me want to return to Paris, although now I would be more afraid to attend the theater there. I spent 9 months In Paris studying at Le Cordon Bleu school. I lived near the rue Mouffetard and would often walk up the hill and then descend towards Notre Dame- what a sight it was to behold!

I am happy to read all your memories of Paris. What a wonderful life you have had! And how fortunate you have been to have been able to live in Paris several times.

I haven't been to Paris since the 90s but would love to go back.