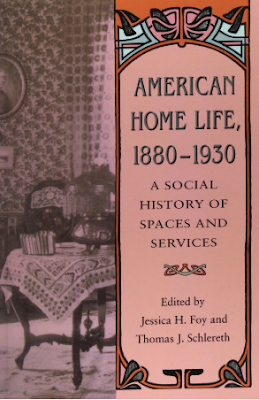 American Home Life, 1880-1930: A Social History of Spaces and Services (published 1992) explores the development of American houses and how each room or space took on its modern meaning during the specified time period. Each chapter is the work of a specialist in a particular area of material culture and history.

Chapters cover the design and layout of the rooms in middle class houses, the expectations of what types of activities would take place inside the home or elsewhere, and quite a few other social and economic features of life in one's home. The sense of what parts of family life took place in the "public" or the "private" spaces of the home changed during this era, with one result being that the room known as the parlor more or less disappeared, replaced by a somewhat different functional space known as the living room.

Changing attitudes affected the floor plan and arrangement of rooms in family homes. For example, the way people viewed children affected architecture of houses. At the beginning of this time period, children usually shared an adult's bedroom, but by the end of the era, children were given special nurseries, play rooms, and personal spaces. The book is full of interesting examples of changing attitudes.

Household technology above all changed dramatically during this era:


"In the forty years between 1890 and 1930, the equipment with which housework was done underwent a veritable industrial revolution. The phrase 'Industrial Revolution' rarely conjures up images of domestic appliances.... Nonetheless, the washing machine and the bathroom are as much products of industrialization as the railroad and the factory -- and they are just as full of social portents." -- From Chapter Nine: "Coal Stoves and Clean Sinks: Housework between 1890 and 1930" by Ruth Schwartz Cowan (p. 211)

Electricity for light and home appliances, gas heat instead of coal or wood stoves, modern cooking ranges, refrigeration, indoor plumbing, and changes in other building products all were important innovations. Building methods had to change to accommodate electric wiring for appliances, electric lighting fixtures, central furnaces with duct work or radiators to deliver heat to each room, and water and sewage pipes. Houses, which formerly had been essentially stand-along buildings, thus developed connections to centralized utilities such as electric plants, water works, and sewage treatment plants.


Labor-saving devices became more and more common during this time. For example, the vacuum cleaner made it much easier to clean floors. Flush toilets meant no more cleaning of chamber pots. Central heating and the replacement of gas or kerosene lamps with electric lighting removed a terrible source of dirt and grime in homes, and thus meant less time needed for house cleaning. Modern cooking equipment required much less constant attention than tending a coal stove. Electric sewing machines made mending and sewing less time-consuming (though other trends were also at work in respect to clothing and household textiles).

Household servants were almost an automatic part of middle-class home life at the beginning of this time period, and were becoming less and less common by the end of the era. The slow reduction in immigration during the era meant that immigrant girls were no longer available as servants -- and in 1924, the near-total cessation of immigration put an end to this frequently-used source of domestic workers. Further, factory jobs and retail jobs for women (whether native or immigrants) paid more and offered better working conditions than domestic service. The authors of these studies do not say definitively whether the reduced labor market inspired invention of more labor-saving devices or whether the new ease of housekeeping provided an incentive to households to stop employing as many domestic workers. The two trends seem to have reinforced one another.

The chapters of American Home Life document amazingly many changes in domestic arrangements and in the design and building of houses that still remain in our lives today. Radios and Victrolas (early record players) changed the way that people amused themselves, and thus the way they used spaces in their homes. Even the telephone affected home design. Before the telephone, there was an expectation that people would make a personal call at one's house. This changed to the expectation that prospective visitors would make a telephone call instead. This seems to have ultimately changed the way that the front door and reception area of a home might be designed, since you didn't have to be prepared for frequent unexpected visitors at your door.

Some of the life-cycle events that formerly took place in a private home were appropriated by public institutions during this time. For example, one life event that was usually held in the very formal and rarely-used parlor of a Victorian home was the funeral of a family member. Though we no longer have parlors in our homes, the term "funeral parlor" retains the memory of the former custom.

Jessica H. Foy and Thomas J. Schlereth, the editors of this volume assembled a wonderful selection of articles on a subject that really interests me. Many of the house styles that are illustrated in the book are still visible as I walk around my neighborhood, which was mainly built in the 1920s, and in nearby neighborhoods that are somewhat older. Reading this book gives me some new insights into what I'm seeing and how people are still experiencing home life.

This sounds like a fascinating book! My grandmother called the front room in her house the 'parlor'... as a kid, I thought that was so strange...

Mae, this is so fascinating! Dave stayed in a village in England in the '80's where people still had outside toilets. Something we cannot imagine today.

The Frank Lloyd Wright library looks like a great room to do desk work and a lousy room to read. Can you see yourself curling up in those chairs? Nope! Too bad, because the light is great!

This sounds like a fascinating book. I'm very intrigued.