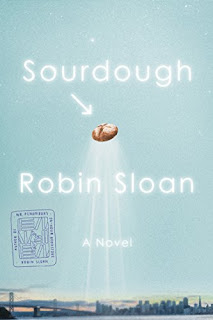 Robin Sloan's recent novel Sourdough explores a number of links between food and technology -- especially robotics and artificial intelligence. Sourdough takes place in San Francisco and Berkeley in the near future: or maybe even now, in an imagined present. More or less by happenstance, a character named Lois, who's a programmer of robots, becomes a sourdough baker. Lois's sourdough starter has remarkable qualities; in fact, it has a pretty fully developed personality and unusual abilities, such as a love of certain types of music, a propensity to luminesce, occasional formation of pseudopods that reach out, and "Scents, various: still banana, always, along with smoky smells, like far-off fires, and occasionally the scent of gasoline." (Sourdough, Kindle Locations 1640-1641).

After a few successful bakes with the starter, which produces loaves inscribed somehow with a face, Lois unsurprisingly realizes that she'd rather bake than program. After a while she doesn't even mind the vastly lower pay scale for baking. She tries out for a place in one of San Francisco's extremely exclusive farmers' markets, competing mainly with pickle makers but others as well. This is where it gets to be a foodie book: all the trendy food games people play are brought into focus. Lois describes her try-out for the market:


"That was the absurdity of this: I was standing in line with people who were masters of their craft. People who pickled plums, pressed olives, raised chickens, kept bees. I was just lucky: gifted with good raw materials and, perhaps, charitably, a sense for how to use them." (Kindle Locations 1051-1052).

Lois's robot-programming background serves her in her new occupation: she obtains a used robot (actually a robotic arm: this isn't one of those books that maintains the silly fiction that robots are going to look like C-3PO in Star Wars or like the humanoid robots in Woody Allen's Sleeper).  She programs the robot to help in her baking, and also solves the classic problem of teaching a robot to break eggs. In the market, though, there's another type of technology at work: using fermentation to create artificial food. Fermenting cultures play a huge role as the plot unfolds in Sourdough. So do these artificial foods, starting with the favorite of the programmers at Lois's former job: "Slurry was a nutritive gel manufactured by an eponymous company even newer than General Dexterity. Dispensed in waxy green Tetra Paks, it had the consistency of a thick milkshake. It was nutritionally complete and rich with probiotics. It was fully dystopian." (Kindle Locations 212-214). Later Lois encounters a more artisanal version made by one of the market vendors.

The market where Lois is selected to sell her sourdough loaves includes many strange and sometimes dystopian offerings of her fellow-vendors. Its existence is a deep secret: it's housed in a former military bunker, and populated by vendors of quite unusual merchandise. Besides the woman who made the artificial food product:


"There was Gracie with her Chernobyl honey; the cave-dwelling mushroom monger; a man and a woman decanting smoothies that appeared to have … things swimming inside them. Orli, the elf, presided over a table piled with cheeses, some ghostly pale, some brown like leather, and some veined not only with blue but also bright green and hot pink. The larger wheels she had carved into pieces at irregular angles, so the resulting hunks looked like soft, fat jewels. There was a workstation selling algorithmically optimized bagels, their outsides perfectly smooth like computer renderings. A printed banner said NEWBAGEL; it was surprisingly well designed." (Kindle Locations 1499-1504).

Sourdough is full of colorful characters, starting with two mysterious brothers, members of a tribe called the Mazg, who first sold Lois spicy soup and sandwiches on sourdough, and then entrusted Lois with their sourdough starter as they left the country. There are many others, such as Charlotte Clingstone, the owner of a famous gourmet Berkeley restaurant named Candide (after the French tale by Voltaire) that might or might not resemble Alice Waters and her restaurant named Chez Panisse (another French literary illusion). The book is full of references to cultural stuff. Really fun cultural stuff! Like "All the restaurants with Michelin stars, where you can eat salted moss and turnip foam." (Kindle Location 1157). Like "rejected applicants to the Oulipo." (Kindle Locations 1719-1720). Like "if anybody wanted to ask a lady out, he could do it via text message like a normal person." (Kindle Location 2384). Like "salt of every kind and color, black and pink and blue. Each variety sat shimmering in a glass canister, priced by the ounce..." (Kindle Location 1661).

Lots of mysteries drive the plot of Sourdough, which is in fact quite fast-paced, and has a rather delightful ending that I'd love to discuss but I don't do spoilers. 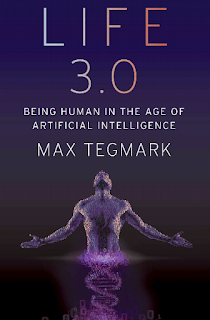 It's much more fun to read Robin Sloan's speculation on the potential benefits and risks of artificial intelligence and robotics than to read the rather tedious and self-promoting non-fiction book titled Life 3.0: Being Human in the Age of Artificial Intelligence by Max Tegmark. I bring up Tegmark's book quite mindfully. It's a very gloomy effort to predict how terrible it would be if AI of some sort gained control of the human world, and where owners of this technology suck up all the wealth. This is a future which the author claims is all too possible.

Tegmark's vision of what could happen uses examples from real AI  research. Unfortunately his approach to convincing the reader is to provide imaginary scenarios of how AI could take over, and to bring this home by citing all the successful tech entrepreneurs, superstars, and researchers who agree with him and how much money he and his cohort have been given to warn humanity of the dangers of technology. I'm not sold.

Tegmark also augments his vision with lots of references to science fiction and dystopian literature. But a real fiction writer like Sloan (and of course many others) is much better at making such speculation come alive.  I do give Tegmark credit for occasional jokes about a future when there are no jobs and maybe all-powerful computers take over -- "A friend of mine recently joked with me that perhaps the very last profession will be the very first profession: prostitution. But then he mentioned this to a Japanese roboticist, who protested: 'No, robots are very good at those things!'" (Life 3.0, Kindle Locations 2287-2289).
Posted by Mae Travels at 4:07 PM

Glad you loved the Sloan book. It was only so-so for me.

These two books paired great for your review. May check out Sourdough (or at least add it to my infinite list of "to-reads").

Great review! Sourdough is on my TBR list. I had it checked out from the library once but didn't get to it before it was due back and I went back to the bottom of the hold list. Your review makes me want to go check my status on it. ;-)

I did enjoy Sourdough, though I thought it was very, very odd. Would a programmer really take so well to baking? And leave her other profession behind? I wasn't sure.

Interesting -- a book *(s) new to me! I love the title Sourdough! And to Deb Nance I'd say that if my fabulous baker boy Rick (aka the computer programmer/data base designer) is any indication, the answer is yes. Maybe not to leave the other behind at his age, but if he was younger...

I haven't read either. They sound interesting.