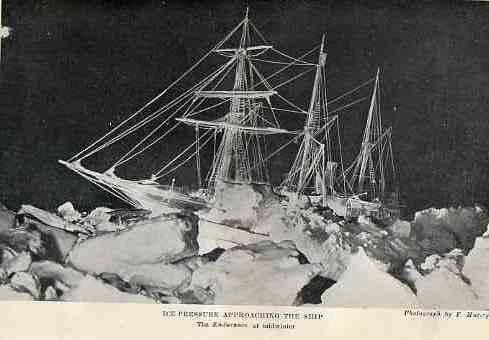 “I have stopped issuing sugar now, and our meals consist of seal meat and blubber only, with 7 ozs. of dried milk per day for the party .... Each man receives a pinch of salt, and the milk is boiled up to make hot drinks for all hands. The diet suits us, since we cannot get much exercise on the floe and the blubber supplies heat. Fried slices of blubber seem to our taste to resemble crisp bacon. It certainly is no hardship to eat it, though persons living under civilized conditions probably would shudder at it. The hardship would come if we were unable to get it.” -- Shackleton, South, p. 118.

Hunting seals and penguins to supplement their scarce provisions, Shackleton and his 27 men made their way across dangerous ice floes after their ship, the Endurance, crushed by ice sank in the waters off Antarctica. The photo above shows the ship about to be crushed, after the men had been forced to abandon it before they too were swallowed up. Rations became more and more scarce, with little fuel to create warm meals in the freezing atmosphere -- a later supper was "a pannikin of hot milk [from powdered milk], one of our precious biscuits, and a cold penguin leg each." (p. 159)

Over and over the reader learns of the terrible conditions: limited food, no changes of clothing, soaking rains or waves leaving the men unable to dry their clothing or bedding, deep-freeze temperatures, and constant darkness in the winter months. The scarcity of food and non-salty water seemed to cause them the worst suffering.

In South: the Last Antarctic Expedition of Shackleton and the Endurance, explorer Shackleton gives a first-person narrative of the ill-fated voyage and describes the heroism and deprivation they experienced. Amazingly, Frank Hurley, the ship's photographer, captured a large number of very dramatic photographs of the expedition, which are included in the volume that I read as well as in the Project Gutenberg online edition, from which I took these images. 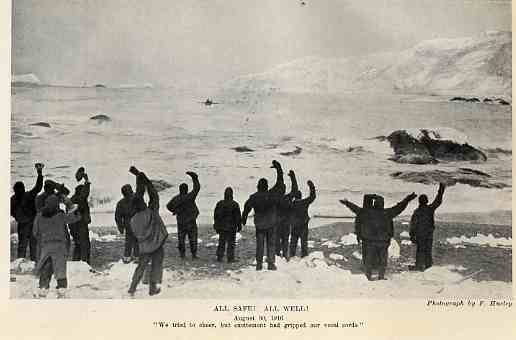 To go back to the beginning of the story: in August, 1914, just as World War I was breaking out in Europe, Ernest Shackleton's ship the Endurance had embarked on a long-planned trip to Antarctica with 28 men and approximately 50 sled dogs. Their intention was to land men, sleds, and dogs on one side of Antarctica and travel across the entire continent, via the South Pole. Another ship, the Aurora, was to land on the other side of the continent and place supplies for the expedition, whose members would be picked up a year or so later when they completed the crossing -- a feat that was not in fact accomplished for around another 40 years. In the last third of the book, Shackleton also describes the voyage of the Aurora.

Nothing went as planned! Although their approach to Antarctica was in the southern summer, they were faced with terrible storms; the ship became iced in, and eventually was crushed in the floes and pack ice and sunk. They had lost radio contact much earlier, so no one was likely to look for them.

The men took the sleds and dogs and all the supplies they could handle, and set off across the ice, towing the life boats. Eventually they arrived at Elephant Island just off Antarctica. Shackleton and five of the men crossed 800 miles of open water and made it to South Georgia Island, where they recruited a rescue ship. After several failed attempts, they arrived at Elephant Island where the 22 stranded men were about to run out of food. The photo above shows these men waving to the lifeboat from the rescue ship -- they had been waiting over 4 months for this arrival. 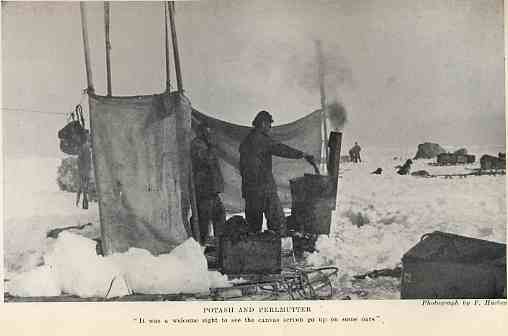 When Shackleton and his small crew on the lifeboat reached the whaling station at South Georgia Island, they were given food, clean clothing, access to bathing, and a warm bed. The biggest shock for them (and later for the 22 men rescued from Elephant Island) was learning from their host that the First World War was continuing at a ferocious pace:


"We were listening avidly to his account of the war and of all that had happened while we were out of the world of men. We were like men arisen from the dead to a world gone mad. Our minds accustomed themselves gradually to the tales of nations in arms, of deathless courage and unimagined slaughter, of a world-conflict that had grown beyond all conceptions, of vast red battlefields in grimmest contrast with the frigid whiteness we had left behind us. The reader may not realize quite how difficult it was for us to envisage nearly two years of the most stupendous war of history." (p. 210)

Reading this book was an unusual choice for me, but I found it compelling!

Mae,
This sounds like an interesting read. I always like to learn about survival. I visited Antarctica last year ( in their summer) went out to far out penguin colonies( where it was windy and colder) in the middle of no where- I can't imagine surviving the winter in Antarctica- yikes

I think I will try and read more about this, I found the subject to be interesting but I wish we had gotten a different film version. This is a wonderful post, very informative.