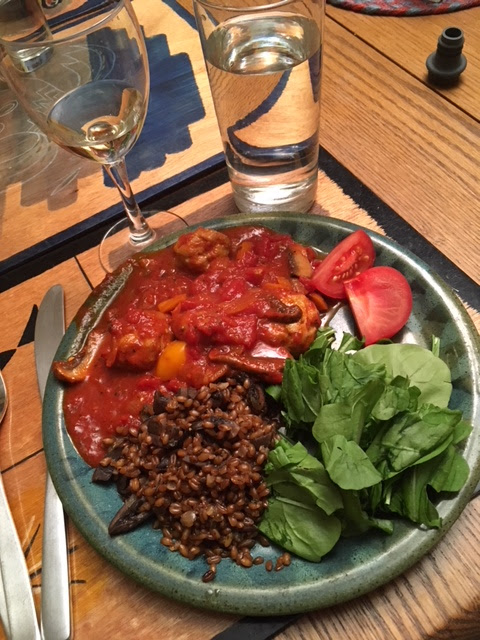 Faye Levy is a cookbook author and food journalist who writes about a variety of Israeli and Jewish foods -- amazon.com lists at least 10 cookbooks that she authored. Tonight I adapted her recipe for chicken meatballs in tomato sauce (published here) to accommodate what I had in the house. In particular, I used ground turkey rather than chicken. Also, having no orzo, I made a pilaf of wheat berries. My tomato sauce was made from a can of San Marzano tomatoes slowly cooked with onions, spices, and other vegetables.

Unlike most meatball recipes, this one does not include either raw egg or chopped vegetables such as onion and celery in the meat mixture -- only spices and breadcrumbs. The resulting taste and texture were excellent. The recipe calls for a delicious combination of spices characteristic of Yemeni-Israeli cuisine called hawaij --  fresh garlic, hot pepper, turmeric, and cumin. I added a touch of cardamom, also found in many recipes for hawaij, which sometimes includes quite a few other spices as well. While I've seen hawaij in Israeli markets, it's rarely available here: you have to blend your own.

This looks delish, Mae. I especially love that the meatballs are baked. And cookies for dessert are one of my favorite things!