What did Abraham Lincoln Eat?

What did Lincoln eat? Here are some examples: Gingerbread men made by his mother, who died when he was 9. Honey from "bee trees" near the family's frontier farm. Corn dodgers, hominy, and other corn-based foods. Apples -- his lifelong favorite. Vegetables of all kinds -- and it's amazing how many kinds of vegetables were available then. Prairie chicken and many other types of game as well as domestic beef, turkey, pork, and more. Sausages. Fried oysters -- not raw! Fancy French banquet food at the Astoria hotel in New York on the way to his first Inauguration. Cold baked beans for breakfast in the White House. Chicken fricasee made to comfort him as he suffered from leading the Civil war. 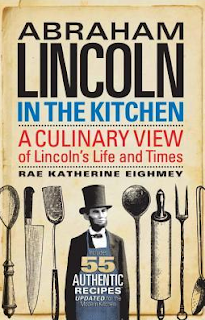 Through extensive research in collections of memoirs about Lincoln, in White House archives, in newspaper accounts of banquets and political events, in 19th century farmers' publications, in records of the grocery stores of Springfield, Illinois, where Lincoln lived for much of his adult life, in contemporary cookbooks, and more, author Rae Katherine Eighmey has put together a readable and very believable account titled Abraham Lincoln in the Kitchen: A Culinary View of Lincoln's Life and Times.

Although Eighmey found few direct or detailed descriptions of full meals that Lincoln ate, her ingenuity in developing information and recipes is impressive. She researched the kitchen equipment available and in common use on frontier farms such as that of Lincoln's father, the better stoves and tools that could have been in the Lincoln house in Springfield, and the quite old kitchen stove that the Lincoln family discovered when they moved into the White House. This history covers many historic ingredients, such as available spices, lye for making hominy (too dangerous for modern use!) and leavening agents used prior to baking powder (not yet in common use), especially saleratus and other home-made leavens made from ash. The author experimented with ways to recreate the 19th century foods in a modern kitchen: the recipes at the end of each chapter are very intriguing, though I haven't tried any of them.

Above all, there's a fascinating social history of what Lincoln ate on his lifelong journey from frontier farms in Kentucky, Indiana, and Illinois through urban life in Springfield, and on to the White House. The growing sophistication of foods that the railroad delivered to grocery shops in Springfield included barrels of oysters kept alive with seaweed; canned foods like tomato sauce just being introduced to American cooks; and various flour products and the breads that were baked from them.

Eighmey writes: "The five years from 1854 to 1859 were pivotal for Lincoln, for the Union, and for the people of Springfield. And part of the story could be told through the food folks in Springfield ate, revealing a crossroads of cuisine feeding a complex society rooted in traditions, open to innovation, and influenced by non-midwestern opportunities." (p. 185)

Rail travel and transport, rapid communication by telegraph, and more innovations were important in the political life of Lincoln and his contemporaries, a topic that's often covered. The changes were also reflected at the table: "Now food traveled readily between sections of the country giving people more and more choices. Even though the political differences between North and South were increasingly tense, on Springfield tables Carolina rice could share a dinner plate with New England stewed codfish. In Springfield the benefits of progress were now an obvious part of everyday life: Oysters! Pineapple! Tomato sauce! In cans!!!! ... A huge variety of fresh and packaged foods filled the stores, and the growing, diverse population had the money to buy it." (p. 187)

The last chapters of Abraham Lincoln in the Kitchen reflect the stresses of Lincoln's life as president, and his personal stress at the death of his young son. I especially admired the descriptions of Lincoln visiting the military camps and eating with the soldiers; those stationed in Washington were reasonably well-fed. Particularly interesting is the author's efforts to reconstruct the methods and recipes for baking the soldiers' bread that had to be produced in very large quantities -- "a simple flour-and-water bread leavened with a yeast sponge." (p. 231)

Needless to say, any book about Lincoln's life ends on a terribly sad note, as his death was tragic and full of terrible implications for the history of the country even up until the present.
Posted by Mae Travels at 10:38 AM

Reading books like this really make you realize how much our eating habits have changed.

A different look at History, viewed through the lens of food eaten. She seems to have done her research thoroughly.

Love this post. I have the same book but haven't read it yet, so I was happy to hear your thoughts and read the excerpts. Fascinating stuff!

Now that's a great way to look at history. Have a great week. Cheers from Carole's Chatter

Not my kind of book, but I enjoyed reading your take on it! A pickle recipe in a Pioneer Woman cookbook called for an ingredient I couldn't find in the stores, and it turned out to be considered too dangerous for home cooking now because if it wasn't entirely rinsed off before pickling it could keep the pickles from being properly preserved. Another advance in food safety!

Mae, I like the sound of this book. Corn dodgers, I hadn't heard that term in years. This sounds like one I would check out of the library for sure.

Thanks for the link to Epicurious and the roasted potatoes. that looks like a good recipe. You asked if I would buy that American Table Cookbook. I probably wouldn't buy the book had I perused it at the library first. That's only because they use lard and the recipes are more geared for meat eaters. We do eat meat but I cook mostly vegetarian at home and have so many other cookbooks with similar recipes. (I answered on my book blog too but I never know if people come back to read responses)

What an interesting topic- love the mix of history and food. I've read books on Abe Lincoln but this is new to me. Sounds like a book I would enjoy reading. thanks for the review