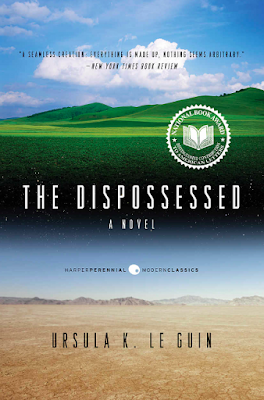 To honor the memory of Ursula Le Guin (1929-2018), who died a few days ago, I decided to read one of her books that I've never read before. I chose The Dispossessed: An Ambiguous Utopia because Paul Krugman tweeted:

I enjoyed reading this book, which was published in 1974, but which takes place thousands of years from now, on a pair of twin planets 11 light years from earth. Of course I liked the fact that the most important person in the story was a brilliant and original physicist, a man named Shevek. I also enjoyed Le Guin's depiction of a utopian society on the planet where he was born. It was a utopia of many sorts, especially a utopia of equality between the sexes, while the planet's twin, where Shevek visits, was a model of inequality between the sexes, as well as of general inequality between classes of people. Both fictional societies in the book offer insights into idealism and reality as applied to our own society, and offer thought experiments about things often taken for granted. Obviously, skillful plot and character development make this a readable and enjoyable work of fiction, not a diatribe or theoretical description.

As always, I watch for ways that food highlights social issues and other themes in novels that I read. Here's an example of food ways on Le Guin's utopian planet, where all meals were served in central canteens called refectories. The food in the refectories was supposed to be equal for all members of the population, whatever their contribution to society. Realizing that the ideal was undermined by special treatment of scientists thus affected Shevek:

"There was always a dessert at the Institute refectory at dinner. Shevek enjoyed it very much, and when there were extras he took them. And his conscience, his organic-societal conscience, got indigestion. Didn’t everybody at every refectory, from Abbenay to Uttermost, get the same, share and share alike? He had always been told so and had always found it so. Of course there were local variations: regional specialities, shortages, surpluses, makeshifts in situations such as Project Camps, poor cooks, good cooks, in fact an endless variety within the unchanging framework. But no cook was so talented that he could make a dessert without the makings. Most refectories served dessert once or twice a decad. Here it was served nightly. Why? Were the members of the Central Institute of the Sciences better than other people?" (The Dispossessed: An Ambiguous Utopia, p. 111).

In the past I've read other novels by Le Guin, and I agree with the generally held view that she was an imaginative creator of literature and that classifying her work as genre fiction disrespected her accomplishments. However there are many many obituaries and older appreciations of her work that do justice to the past and to her oeuvre so I don't have to.
Posted by Mae Travels at 2:18 PM

Woke up that morning and husband, already busy at his tablet, gave a sudden sigh. I asked him, now what? He replied, Aunt Ursula is dead. Then I went owwwchhh, too. No need for all the names, everyone knew Aunt Ursula.

My sister was Ursula and I also had an Aunt Ursula.

I too was saddened to hear of her death.

I've loved her books, but strangely never heard of this one, and will definitely make up for that. She was an original for sure.

What a legacy she left. Just heard a rebroadcast of a Terri Gross interview with her on NPR. Agree with Claudia---what an original.

That's a great idea! I need to read more of her books. I think I've only ever read Left Hand of Darkness.

I've never heard of this author before. But this sounds like a really interesting book. I'll have to check it out!

Interesting -- I'd not heard of her before her obituary and I, too, saw Paul K's comment. Thanks for the review and overview!