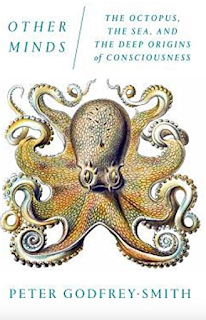 "Cephalopods are an island of mental complexity in the sea of invertebrate animals. Because our most recent common ancestor was so simple and lies so far back, cephalopods are an independent experiment in the evolution of large brains and complex behavior. If we can make contact with cephalopods as sentient beings, it is not because of a shared history, not because of kinship, but because evolution built minds twice over. This is probably the closest we will come to meeting an intelligent alien."-- Other Minds: The Octopus, the Sea, and the Deep Origins of Consciousness (p. 9).

Peter Godfrey-Smith's book about his experiences with octopuses, cuttlefish, and squid (the cephalopods) combines the author's academic profession, philosophy, with his avocation: scuba diving. I don't read much philosophy -- in fact, I avoid it -- but I found this a readable and very informative combination of theory and observation.

It's likely that you've seen a Youtube video of an octopus escaping from the aquarium where it's supposed to live and sneaking into a nearby aquarium to eat the other captive fish. Thanks to stories about efforts to keep them in captivity, the cognitive capabilities of the octopus are almost legendary. The various species of octopus range greatly in size, and inhabit most of the world's oceans; the author's experiences are mainly in Australia and California, with reports from scientists in many other locations.

An octopus has eyes much like ours (lens, retina...) but also visual sensors are found all over their skin. Octopus blood is totally different chemically in the way it supplies cells with oxygen; an octopus can take in oxygen through the skin as well as the gills -- and an octopus has three hearts to circulate the blood. An octopus has a huge number of neurons; in fact, the neurons in octopus arms are almost independent of its brain. An octopus has no bones: it's almost entirely made of soft flesh, which has various consequences. Sometimes the octopus is solitary; sometimes octopus groups seem to live together. The social organization of the octopus isn't yet understood: it's challenging for humans to spend much time with them since scuba diving is pretty time-limited.

On octopus behavior Godfrey-Smith writes: "Octopuses, of at least some species, have an opportunistic, exploratory style of interaction with the world. They are curious, embracing novelty, protean in behavior as well as in body." (p. 98) He describes the ways that the octopus and close relative the cuttlefish can display dramatic patterns and camouflage on their skins: "They can be completely invisible to an observer— an observer looking for octopuses— just a few feet away." (p. 123). He provides a great deal of detail on how they use a number of different types of pigment cells and reflective cells in their skin, and speculates on what these displays might mean. This is incredibly fascinating:


"Intermediate between the clear cases of camouflage and of signaling are deimatic displays. These are dramatic patterns often produced while fleeing a predator. It’s hypothesized that they are an attempt to startle or confuse the foe— to suddenly look different, and weird, in a way that might lead the predator to pause or lose their bearings. Here, the display is supposed to be noticed, but it does not send information to a receiver. It is merely supposed to be confusing or disruptive." (p. 125).

Most fascinating of all is the possibility that the displays are not only for communication or for camouflage, but also a side effect of the animal's inner state:


"That is how I interpret the colors of many giant cuttlefish; they are an inadvertent expression of the animal’s inner processes. Such patterns include flares and surges of activity, and also subtler changes. If you look closely at the 'face' of a giant cuttlefish— the area between its eyes and down the first part of its arms— you will often see an ongoing murmur of very small color changes. Perhaps the machinery of color change is in an 'idling' state there." (p. 127).

Other Minds describes cephalopod evolution, anatomy, and behavior in systematic terms, and attempts to analyze just what observed behavior tells us about the neuroanatomy and neural organization of these creatures. There's a certain amount of speculation about how the two different evolutionary paths -- ours and those of the cephalopods -- led to some type of cognition and intelligence with very different anatomical structures.

Can we look an octopus in the eye and seem to reach any sort of understanding with it? Well, just maybe. But Godfrey-Smith doesn't encourage over-interpretation of human-octopus encounters. Other Minds is a richly thought-provoking book! The conclusion:


"There are many reasons for us to appreciate and care for the oceans, and I hope this book has added one. When you dive into the sea, you are diving into the origin of us all." (p. 204).