A Thought-Provoking Book about Animal Capablities 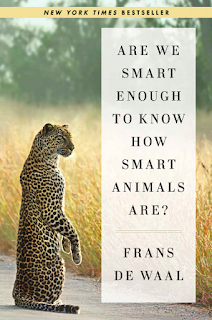 Are We Smart Enough to Know How Smart Animals Are? by Frans de Waal explores the history and successes of a particular scientific endeavor called ethology: "the biological study of animal behavior" (p. 29). The book covers the state of the art of studying animal intelligence, non-human mental capacities, insights into animal minds from neuroscience, cognition and social interactions in various species, and other behaviors. Many of the observations made by de Waal and his colleagues over his long career in the field were in direct conflict with rigid assumptions about non-human characteristics held by earlier behaviorists.

Are We Smart Enough...  is full of descriptions of how the earlier researchers floundered in blind alleys while systematically excluding and mocking those who disagreed with their view of the limited nature of any creatures that were not humans. This is interesting, but what I found much more interesting was de Waal's many stories about the actual behavior of animals including a wide variety of species with numerous adaptations. He discusses the highly developed social life, social learning, and food-gathering methods of various species including chimps, monkeys, and corvids like crows and jackdaws, and even describes the clever hunting techniques of the octopus. We learn of many ways that these creatures make and use tools. We learn about their cognitive capacities, evidence of their consciousness and self-awareness, and several other characteristics once believed unique to humans. The question of consciousness, a problematic concept whether in humans or animals, is especially intriguing: from a conference on the subject de Waal quotes this: "The weight of evidence indicates that humans are not unique in possessing the neurological substrates that generate consciousness." (p. 234)

There are many fascinating descriptions of apes, small monkeys, and even birds creating tools from available materials like twigs. One type of monkey even employed a sharpened stick to kill a small animal in its hole and pull it out to eat it. Moreover, a number of different animals apparently foresee when they would need the tools, bringing them to a site where food may be available, and then using them to overcome challenging situations where food is hard to get. Here's an example of one of de Waal's very informative original illustrations about wild chimps using tools -- 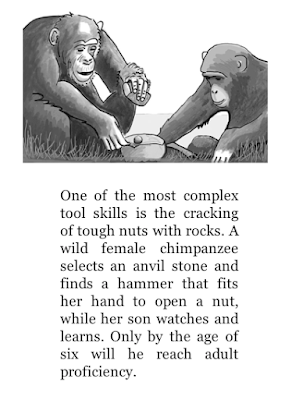 De Waal describes quite a bit about how chimps go about this elaborate activity, especially how young chips patiently watch their mothers breaking the hard nut shells. At first the young chips ineffectively imitate their able mothers in a skill that's not in fact that easy for a human to do; after several years they become adept. An important fact about this observation is that it occurs in wild chimps, not in captive individuals. Here's more:


"The Japanese primatologist Tetsuro Matsuzawa tracked the development of this skill at the 'factory,' an open space where apes bring their nuts to anvil stones and fill the jungle with a steady rhythm of banging noise. Youngsters hang around the hardworking adults, occasionally pilfering kernels from their mothers. This way they learn the taste of nuts as well as the connection with stones. They make hundreds of futile attempts, hitting the nuts with their hands and feet, or aimlessly pushing nuts and stones around. That they still learn the skill is a great testament to the irrelevance of reinforcement, because none of these activities is ever rewarded until, by about three years of age, the juvenile starts to coordinate to the point that a nut is occasionally cracked. It is only by the age of six or seven that their skill reaches adult level." (p. 80).

Exaggerated claims about animal capacities are in a way the other side of the extreme views of animal limitations. For example, de Waal provides much detail about the claim that the famous parrot Alex was really using language just as humans do. De Waal doesn't think Alex's ability was the same as human language. However, he respects the endeavors with Alex and other language-trained non-humans, saying:


"The immense effort to find language outside our own species has, ironically, led to a greater appreciation of how special the language capacity is. It is fed by specific learning mechanisms that allow a toddler to linguistically outpace any trained animal. It is in fact an excellent example of biologically prepared learning in our species. Yet this realization by no means invalidates the revelations we owe animal language research. That would be like throwing out the baby with the bathwater. It has given us Alex, Washoe, Kanzi, and other prodigies who have helped put animal cognition on the map. These animals convinced skeptics and the general public alike that there is much more to their behavior than rote learning. One cannot watch a parrot successfully count up items in his head and still believe that the only thing these birds are good at is parroting." (pp. 112-113)

There's much more here than I can possibly cover in a brief review. A very thought-provoking book!

To quote the review in the New York Times by Jon Mooallem:


"We sometimes fall into what de Waal calls 'neo-creationist' thinking: We accept evolution but assume 'evolution stopped at the human head' — believing our bodies may have evolved from monkeys, but that our brains are their own miraculous and discrete inventions. But cognition must be understood as an evolutionary product, like any other biological phenomenon; it exists on a spectrum, de Waal argues, with familiar forms shading into absolutely alien-looking ones. He introduces what he calls the rule of 'cognitive ripples': We tend to notice intelligence in primates because it’s most conspicuous. It looks the most like our intelligence. But 'after the apes break down the dam between the humans and the rest of the animal kingdom, the floodgates often open to include species after species.'" (NYT Review, April 26, 2016)

It sounds like a very interesting book to read.

This sounds fascinating but pretty heavy and in depth -- not a book you can fly through, to be sure, but well worth the time spend.

I was especially interested in seeing all the ways animals show intelligence. I was not aware of most of these.

I now wonder if animals are continuing to evolve in their cognition. I would think they are.