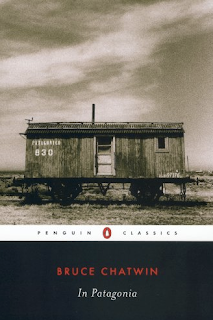 I've been reading In Patagonia by Bruce Chatwin (published 1977). We have signed up for a trip to Patagonia next month, but I doubt that this book will really be much preparation for our trip.

I hope we will see some of the birds he mentions, like "yellow-fronted ibises, big birds with bright pink feet that made a melancholy honking sound;" "a flock of flamingos [that] took off, flashing orange and black and striping the blue water white as their legs lifted clear;" "black petrels ... slicing the swells;" or "Two condors had dived on me. I saw the red of their eyes as they swept past, banking below the col and showing the grey of their backs. They glided in an arc to the head of the valley and rose again, circling in the upthrust, where the wind pushed against the cliffs, till they were two specks in a milky sky." And many penguins -- "Albatrosses and penguins are the last birds I’d want to murder." (p. 31, 53, 199, 140, 87).

The introduction to In Patagonia by Nicholas Shakespeare offers this: "Birds are wonderful. Condors in the cordillera, a black and white vulture, a beautiful grey harrier (also amazingly tame), and the black necked swan which has my prize for the best bird in the world. On the mud flats are flamingoes— these are a kind of orange colour— the Patagonian goose inappropriately called an abutarda, and every kind of duck."

On our upcoming trip, we might hear a little about the early explorers, adventurers, and settlers, or about the original natives, who all figure with importance in Chatwin's travels. For example, Butch Cassidy, famous outlaw, escaped to Patagonia where he was well-known and gave rise to various legends. I bet we'll hear about this!

Mythical birds and animals, as well as prehistoric creatures whose bones are found there, play an outsize role in Chatwin's sketches. As a child, he was fascinated by a souvenir of Patagonia owned by his grandparents: "a piece of skin. It was a small piece only, but thick and leathery, with strands of coarse, reddish hair."  (p. 1). The skin was instrumental in influencing Chatwin to explore modern-day Patagonia.

As a child, Chatwin thought it was from a Brontosaurus, but in fact it was a mylodon, or Giant Sloth. Chatwin traces the identity and history of the man who gave the bit of mylodon skin to his grandparents -- an adventurer with a complicated story. He finally writes a whole chapter on the natural history and discovery of this animal that roamed Patagonia thousands of years ago. I wonder what we'll learn about prehistoric creatures on our much tamer and accompanied tour!

The book includes many flashbacks to the early explorations, misfortunes, and theories about Patagonia. For example: "Until in 1619 the Dutch fleet of Schouten and LeMaire rounded the Horn— and named it, not for its shape, but after Hoorn on the Zuyder Zee, cartographers drew Tierra del Fuego as the northern cape of the Antichthon and filled it with suitable monstrosities: gorgons, mermaids and the Roc, that outsize condor which carried elephants." (p. 111).

As always, I was interested in what Chatwin ate on his trip, often walking long distances and staying with random country people. I'm sure our meals, provided by the tour company and on the large ship (the National Geographic Explorer) will be very different. Chatwin makes food details tell a great deal about the people as he meets them -- here are a few such passages:


"At dinner the waiter wore white gloves and served a lump of burnt lamb that bounced on the plate. Spread over the restaurant wall was an immense canvas of gauchos herding cattle into an orange sunset. An old-fashioned blonde gave up on the lamb and sat painting her nails. An Indian came in drunk and drank through three jugs of wine. His eyes were glittering slits in the red leather shield of his face. The jugs were of green plastic in the shape of penguins." (p. 22).

"The day was hot. Mrs Powell said: ‘It’s better to talk than work. Let’s have an asado.’ She went to the barn and set a table with a red and white check cloth. Eddy lit the fire and his father went to an underground larder. He cut a side of mutton from a hanging carcass, stripped off the fat and gave it to the dog. He fixed the meat to an asador, which is an iron spit in the shape of a cross, and stuck it in the ground slanting over the fire. Later we ate the asado with a sauce called salmuera, made of vinegar, garlic, chillies and oregano. ‘It takes the fattiness off the meat,’ Mrs Powell said. We drank thin vino rosado and Alun Powell talked about the herbs that grew in the desert." (p. 24).

"As we drove into Esquel, a bush fire was burning on one of the tight brown hills that hemmed in the town. I ate at a green restaurant on the main street. A zinc counter ran the length of the room. At one end a glass vitrine displayed steaks and kidneys and racks of lamb and sausages. The wine was acid and came in pottery penguins." (p. 31).

"The restaurant was owned by an Arab, who served lentils and radishes and kept a sprig of mint on the bar to remind him of a home he had not seen." (p. 75).

I think my experiences on a tour and on a boat with 160 passengers will be very different from the independent travels that Chatwin describes.