Who cooks for you? 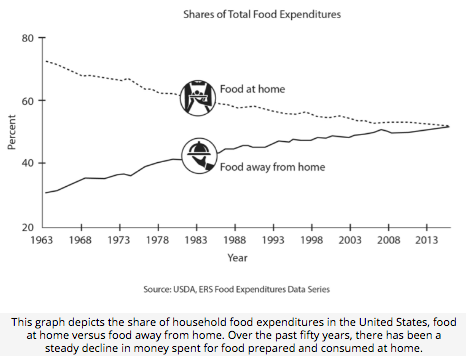 "Celebrate cooking, wherever it happens!"

National Cooking Day was earlier this week. The "holiday" doesn't seem to be widely recognized, but the University of California Press posted an interesting short essay by Amy Trubek, author of Making Modern Meals: How Americans Cook Today. Using the above graph from the USDA, she explained that people now spend as much dining outside the home as inside. She wrote:


"We now spend over 50% of our annual food purchases on food made outside the home. Americans cook at home, sometimes, but to find today’s everyday cooks, we might also need to look elsewhere. In restaurants, commissary kitchens, bakeries, school cafeterias, and other locations across the continent, hundreds of thousands of people wake up each morning, go to work, and make our meals (and snacks and side dishes and bread and cakes) every day, rain or shine."

A few moments thought tells me that quite a lot more meals must continue to be eaten in than out: after all, it's more expensive to eat out, so the 50% spent preparing meals at home buys more food. I haven't found any hard data for this; in fact a Business Insider article suggests that there's no hard data available, and that the data on actual cooking and meal prep is hidden in the way expenditures are accounted for: "Americans' three largest food spending categories, roughly 60% of their annual food budget, involve little to no actual cooking." (source)

However, the number of meals eaten outside the home is not that huge: "According to a Boston Consulting Group report, the largest generation in American history [millennials] eats out 3.4 times a week, compared with 2.8 times a week for non-millennials — and they’re more likely to get it to go than to eat at the restaurant." (source)


The answer to your question is my husband, usually! ;)

As a family of five, we hardly ever ate out as a family on a regular basis, because it was so much cheaper to prepare a meal at home! Now my husband and I get to eat out more often, but I still prefer a home-cooked meal most of the time.

I know I'm the exception. I probably cook (or eat leftovers) 330 days a year.

I love statistics and these are very interesting. Makes me want to go out tonight!

Mae,
I find that although I cook about 4 nights a week, I get tired of shopping for food, bringing it home, unpacking , prepping it, etc.. sometimes it's just easier to eat out for two people. I do love making a big pot of soup and we eat it all week in the spring, fall, and winter. The owl sounds like a cross between a dog and a rooster