Peter Lovesey has been writing delightful mystery novels for many years. In the 1970s, he wrote a series of historical mysteries that took place in Victorian England, and featured a detective named Sergeant Cribb. I read a number of these a long time ago.  A year or so ago, I read through all his present-day mysteries featuring policeman Peter Diamond, which he started in 1991. He seems to continue writing a new one once every year or two.

My friend Jeanie Croope, who blogs at The Marmelade Gypsy  just sent me a copy of Lovesey's 1993 novel Bertie and the Crime of Passion -- one of three mystery stories in which detecting is done by quite a surprising figure: Albert Edward, Prince of Wales (1841-1910), known to history as Bertie. Jeanie's package arrived in yesterday's mail, and I read the book by the time today's mail arrived -- really could not put it down! 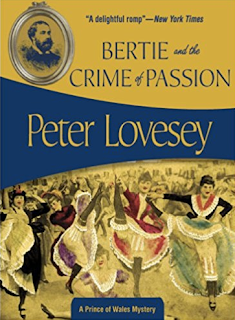 Bertie and the Crime of Passion takes place in Paris. Many other highly recognizable figures besides the Prince play a role in bringing the murderer of a young man to justice. Throughout the exciting few days of chasing various suspects and defying the complacent head of the Paris police, the world famous actress Sarah Bernhard (1844-1923) accompanies Bertie. She contributes quite a bit to the solution of the crime as she collaborates with him in analyzing the numerous clues and false starts they experience.

Bertie and Sarah Bernhardt visit many famous locations in Paris. These range over many levels of French society. I enjoyed reading about their experiences in the great food market Les Halles, in the streets and insalubrious apartments in Montmartre, at a Medical School in the Latin Quarter, inside a stinking prison cell where a suspect languished, in various low-life establishments, and in mansions where very rich former members of the French nobility live. (It reminded me of some of the descriptions in the books I reviewed earlier this week.)

Because the murder took place in the famous Moulin Rouge night club in Montmartre, the artist Toulouse-Lautrec, who was always present and sketching there, must be interviewed. Thus we also meet some of Toulouse-Lautrec's famous subjects such as La Gouloue (Louise Weber), the dancer famous for the Can-Can, and her partner Valentin le Désossé  (Valentin the Boneless, Jacques Renaudin), two fascinating characters whom Lovesey brings into his tale as witnesses to the crime. We also hear mention of Bertie's mother -- Queen Victoria, obviously -- and some of his other relatives. It's all a wonderfully imagined fiction.

Knowing how I love to read about food in mystery stories was one of Jeanie's reasons for sending me this amusing book. I definitely enjoyed the food descriptions as she knew I would.

Lovesey arranges his plot so that Bertie and Sarah Bernhardt stop several times in Paris restaurants, sometimes for lavish meals, sometimes for merely mid-level ones that are also skillfully cooked. Bertie has a huge appetite, and loves his food, while Bernhardt is a picky eater and sometimes barely touches the many courses that Bertie orders for them.

Chapter 5 describes one such meal narrated (as all are) by Bertie. While eating a number of courses, the two discuss the state of their detection so far, and also manage to interview the waiter and the sommelier for information about the crime.

Here's an abbreviated version of the chapter, limited to the food:


"That evening, I dined with Sarah Bernhardt at Magny's, where the cuisine has never failed to please.

"Over some delicious Ostend oysters garnished with anchovies and radishes, I returned to the vexing question of the murder...

"She set down her knife and fork and sat back in her chair to meditate on the matter. She had scarcely touched her oysters, but then her appetite is birdlike.

"The fish course I had chosen was salmon trout with white bait... I listened with restraint, finished my fish course, called for the next wine, a Saint-Estèphe...

"'...I've done this before, Sarah. I'm an expert at lulling the guilty into a sense of security. Now, I think the waiter is approaching with your pheasant and truffles. Let us enjoy the meal'...

"And, my word, Magny's excelled themselves. The bird was roasted to perfection, those truffles looking like ebony apples....

"... I enjoyed a savory dish of quails garnished with peeled grapes, accompanied by Chambertin 1884, followed by some splendid rum babas and chocolate patisseries. Bernhardt had long since placed her napkin on the table, but she joined me in coffee and a small chasse café in the form of a cognac." (p. 65-72)

After all of this -- and quite a number of revelations about the mystery, they discuss the history of crêpes suzettes with the waiter, and Bertie says "a few crêpes suzettes and a little more champagne would not come amiss at the conclusion of this excellent meal. What do you say, Sarah?" (p. 76)
Posted by Mae Travels at 9:48 PM

Oh Mae -- you powered through that! I'm so glad you liked it. I'd definitely read more of his. I didn't realize he'd written the Sgt. Cribb's -- I remember that from Mystery! eons ago!