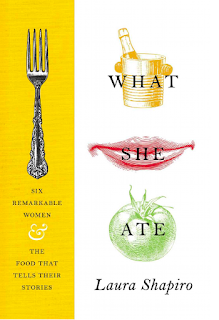 What She Ate: Six Remarkable Women & the Food that Tells Their Stories by Laura Shapiro is a fascinating book. It was published earlier this year, and I've read several reviews that made me want to read it. I'm quite a fan of Shapiro's food books, including Perfection Salad (about women and cooking 100 years ago) and her brief but wonderful biography of Julia Child.

My reaction to What She Ate begins with the author's ingenuity in choosing subjects: she picked six women who differed so much from one another that it made my head spin. Shapiro avoided obvious choices.

For a writer who was interested in food, she picked Barbara Pym. Not Virginia Woolf! Shapiro writes:

"Barbara was not a food writer, but she saw the world as if she were— as if every piece of cake or even just the crumbs on the plate offered the most enticing clues imaginable to time, place, class, and character."(p. 176).

For a First Lady she picked Eleanor Roosevelt, known less for food than almost any other 20th century President's wife. Shapiro shows that her reputation as a hater of food is inaccurate:

"An intense relationship with food ran right through Eleanor’s life, darting into her work, her feminism, and her deepest relationships." (p. 91). 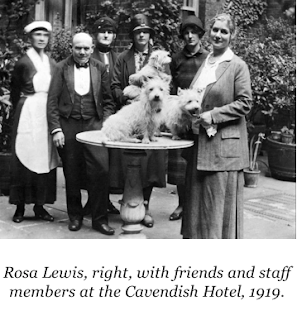 For a cook she picked the obscure Rosa Lewis (1867–1952). Not Alice Waters! Lewis was a self-made English cook, caterer, and eventually owner of a hotel, as the illustration from book at right shows. And guess who turns up again in the story of this successful woman from the lower classes? Bertie, Prince of Wales: he who figured fictitiously in the mystery I read earlier this week. In real life the Prince helped to make Lewis's catering services popular with late-19th century London society hostesses:

"The most important of her dinner guests was the Prince of Wales, who would become King Edward VII after Victoria’s death in 1901. ... The prince was a prodigious eater who genuinely appreciated fine food."(p. 53).

Dorothy Wordsworth, born in the 18th century, was unusual in the attention she paid to food in her diary, kept while she tended to the needs of her famous brother William the Poet. For her declining years (something like 30 of them) she was a mental patient whose relationship with food was akin to gluttony. A most startling and interesting choice!


The most recent subject of What She Ate is Helen Gurley Brown, author of Sex and the Single Girl (1962). Brown's private relationship to food was to avoid it because she cared only about being excessively, obsessively thin. However, her published work was more confused. Shapiro writes:

"Real food or diet food, splurging or starving— no matter what was on the table, Helen made it a point of honor to cast her public relationship with food in rapturous terms. Everything she ate had to be 'delicious' or 'scrumptious' or 'luscious,' especially when she was evoking a zero-calorie bouillon cube or a breakfast of protein powder stirred into diet orange soda."(pp. 244-245).

For a completely outlandish choice, the author picked Eva Braun, Hitler's mistress. Shapiro shows quite a bit of distaste for this subject and conveys it to her readers, but still makes the chapter enlightening. In the introduction, Shapiro explains this choice:


"Eva Braun’s food story, generated as it was by her devotion to Adolf Hitler, might appear to take place strictly within an appalling realm of its own; and to an extent, it does. But despite the moral distance that separates her from everyone else in this collection, there are elements in her relationship with food that we’ve seen in other chapters. Like Dorothy, she always had her gaze fixed on the man she loved. Like Rosa, she was thrilled by her access to a higher social rank. What emerges most vividly in Eva’s relationship with food, however, is her powerful commitment to fantasy. She was swathed in it, eating and drinking at Hitler’s table in a perpetual enactment of her own daydreams. For propaganda reasons, she was not allowed to appear in public with Hitler, which meant that she had no truly gratifying forum in which to show herself off as the Führer’s chief consort. Only the lunches and dinners he took with members of his immediate circle allowed her to bask in a role for which she had trained by studying movie and fashion magazines. At these meals, her glory visible and her status secure, she treated food as a kind of servant whose most important job was to keep her thin. Indeed, the only aspect of Hitler’s life that she found repulsive was his heavy vegetarian diet. When the mashed potatoes with cheese and linseed oil came around, Eva said a firm no." (pp. 10-11).

Considerable research clearly went into the story of each woman's relationship with food -- and each one was very different from the others in their food attitudes as well as in general. As far as I'm concerned,  Shapiro's interest in her own subjects, no matter how obscure, makes for delightful and very informative reading.
UPDATE May 15, 2022. Laura Shapiro gave a wonderful Zoom talk on this book to the Culinary Historians of  Ann Arbor. Much about her reasons for making the choices she did, and how she felt compelled to choose only dead subjects, and chose women because she says she doesn't understand men at all. I'll look forward to her next book!
Blog post © 2017, 2022.
Posted by Mae Travels at 7:00 AM

Happy to hear you liked this way more than I did.

The author made some intriguing choices of subjects in this book.

That is a cast of main characters I would never have thought to choose for a book like this. Real creative and intuitive thinking on Shapiro's part. Sounds like fun! Thanks for the review.