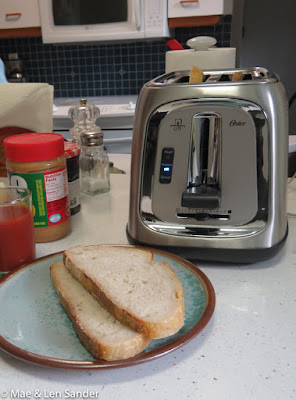 Toast is new in my kitchen. For years we didn't eat much toast, so we didn't devote valuable counter space to a toaster. Lately, we've been eating more toast, so we have acquired a toaster, which is occupying a space on the high counter where we eat breakfast. The toaster was a gift from Evelyn, who took us to Target and helped us pick it out during our visit with her last weekend. 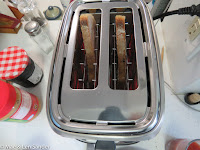 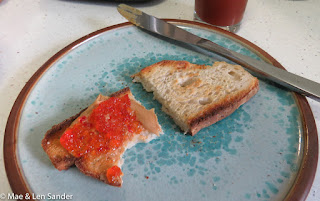 I enjoy toast with butter, with peanut butter, or with peanut butter and pepper jam. I like it with cheese. I like lots of other kinds of jam. I haven't toasted a bagel yet, but my new toaster has wide slots in order to accommodate bagel halves, and a button that reads "Bagel." I'm still experimenting with the little slider that determines how dark to toast the bread. I wonder how long it will take until I tire of toast!


Toasters have retained their simplicity and they still just consist of the slots with electric coils, the pop-up mechanism, and the darkness selector -- no "feature creep" that dreaded phenomenon that more often happens in computer programs. My new toaster is pretty much like the even-simpler electric device invented in 1893, with the pop-up feature developed in 1919: history here.

The toaster oven, I would say, is a toaster with feature creep. If I want the cheese toasted on top of the bread, or if I want a tuna melt, or if I want to toast a huge sandwich bun, that's a job for my big, beautiful Breville toaster oven. It also reheats pizza or other leftovers nicely, and can bake a two-person casserole or a small tray of cookies. Theoretically, it could broil small items, but I don't want to make a mess in it (my big oven is self-cleaning).

Though a great device, the toaster oven is simply too slow for the basic job: toasting. The toaster takes around 2 minutes to toast 2 slices of white bread. My toaster oven takes 5 or 6 minutes, and although it does more slices at a time, the wait until you can start spreading your peanut butter is something like two times longer. As every user of Microsoft products knows, when designers add a lot of functionality to something simple, it gets less convenient to do what you originally liked it for. 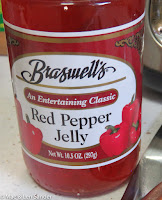 That's all that's really new in my kitchen at the end of September, unless you count the new brand of pepper jam that I bought recently. Or the new jar of Durkee's Famous Sauce that we now have on hand after a long absence -- but I'll write about the Durkee's later.

I'm sharing this post with a group of bloggers who post about numerous new things in their kitchens each month. I feel rather un-adventurous compared to them, since I rarely try really new items from the store, although I try new flavor combinations and new recipes sometimes. To see their much broader selection of new things, check the master list of links at Sherry's blog here: Sherry's Pickings: In My Kitchen. What's new in your kitchen?
Posted by Mae Travels at 10:19 AM

We have a toaster but I never use it. Carl does, though, so it's worth it. We got rid of our toaster oven because we never used it.

WE recently bought a Cuisinart toaster (CPT‑180 Metal Classic 4‑Slice, about $50) that I like very much because it is actually two independent 2-slice toasters in parallel, each of which has a large, easy-to-read control knob. We use it, much in the manner you describe, almost every day.

hi Mae
thanks for being the number 1 blogger on IMK again! Always great to see you there. I love your toast post! It's hard to imagine a kitchen without a toaster. I think every Aussie is brought up on toast and Vegemite for brekkie. Hubby bought a little sandwich toaster maker a while ago so we can do toasties- not sure if you call them that in the US:) see you next month cheers sherry x

Yes, toast is the number one thing I think of most mornings and the toppings are all so varied. I love quince jam the best.

Lorraine @ Not Quite Nigella said...

We still don't own a toaster but I love toast so I put it under the grill. A toaster or a toaster oven would make it easier though!

Mmmmmm, toast! I use my toaster almost daily though not always for breakfast. Toasted English muffins make great bases for cheese melts, crab melts, tuna melts, etc. for lunch or a late snack. The toaster is tops for reheating savory sourdough waffles to accompany soups or chili.

Mae, your toast post was such fun! I wouldn't call you un-adventurous though... learning to use a new appliance and eating pepper jelly for breakfast sounds pretty adventurous to me! I think you've reached a wonderful stage of "kitchen contentedness". Thanks for the entertaining read!

I haven't had a toaster in years. We just use the toaster oven since I can't sacrifice anymore counter space. It works, though sometimes I really want a toaster!

A toaster is a big thing in most Australian kitchens, we were bought up with Vegemite on toast, as well as a slathering of butter! I couldn't be without my toaster, even though I would use my grill until a replacement was found :) xx
https://missfoodfairy.com/2017/10/10/in-my-kitchen-october-2017/

I will have to show my husband your post, my blog is named after the fact that when we first got together I would ask what he would like for dinner and he would say "anything but toast" !

@Serena McDonald... I noticed your blog name in connection with this! Your photos in your kitchen were beautiful! I tried to leave a comment but the software wouldn't let me.

I think we need a four slice toaster.