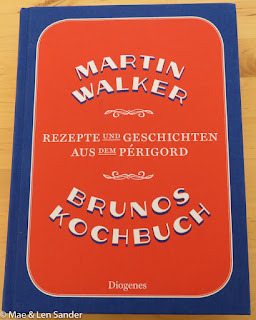 Martin Walker's series of detective books features Bruno, the chief of police in St. Denis, a fictitious small town in the Périgord region in Southwestern France. I've enjoyed all the Bruno books, from Bruno Chief of Police, published in 2008 through this year's new book, The Templar's Last Secret.

One great feature of these books: they include mouth-watering descriptions of the foods that Bruno cooks, eats, and enjoys. Most of Bruno's cuisine features intriguing products purchased, bartered, or gifted from local farmers and producers (who often also furnish clues about whatever terrible crime he's trying to solve). As a result, trying to recreate these meals in an American kitchen would be a big challenge. But there's a chance to try: Walker has recently written a cookbook.

ALAS! The only publication of this book is in German. I don't know exactly why no English edition seems to be forthcoming -- a long thread on Walker's blog has described for several years the reluctance of English publishers to go through with it. Around a month ago, at the end of this thread, he says he still doesn't know why it's not progressing. The German edition recently won a prize. Walker's blog explains: it won "'World's Best Book on French Cuisine' at the Gourmand International awards, in Yantai, China, home of China's booming new wine industry." (link and link)

I looked through a copy of Brunos Kochbuch that belongs to Evelyn. I definitely would love to have a copy in English! Here are a few photos that I took of the many beautiful pages of this book:

I had to come here after i read you current post. I found the cookbook on Amazon, but it's hideously expensive. Looks delicious though - and since I'm German the language is no problem. Odd though that it isn't published in English.